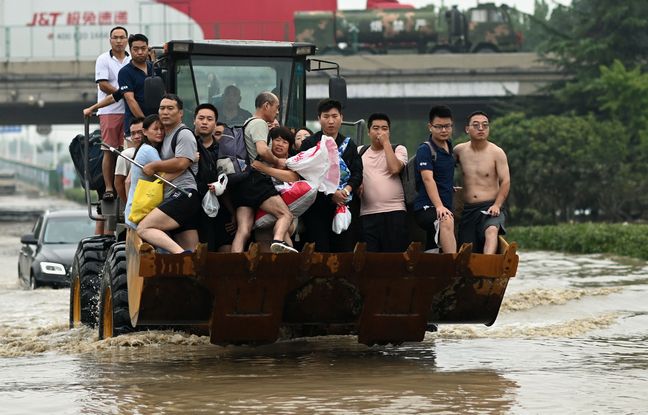 The devastating floods that have hit central China since the start of the week have left at least 51 dead, according to a toll revised upwards by local authorities on Friday.

The torrential rains that fell in the province of Henan, the third province of the country by the population with nearly 100 million inhabitants, resulted in the evacuation of more than 395,000 people and caused more than 65.5 billion yuan (8.5 billion euros) in damage, authorities in Zhengzhou, the provincial capital, said in a statement. The latter was particularly bruised, to the point that a subway train was engulfed Tuesday, killing 12 people.

Passengers stranded in the subway as the water rises around them, this is what happened in the city of Zhengzhou, submerged by the rain. Many people drowned, and nearly 200,000 residents were evacuated.

In the metropolis, firefighters and rescuers are still active this Friday with huge pumps to remove the large amounts of water accumulated in the streets. The police forbid onlookers and journalists to take photos and videos. Bodies are still likely to be inside submerged vehicles.

The probable arrival of a typhoon

90 km from Zhengzhou, the city of Xinxiang and its surroundings are cut off from the world. The Wei River came out of its bed, according to public television CCTV. His images show rescuers using a removable pontoon to evacuate residents. Countless farmlands have been submerged by water and only the treetops are now visible.

Climate change is singled out as the reason for the worst bad weather in the region since weather records began sixty years ago.

Further east, China is now anxiously monitoring the progress of Typhoon In-fa, with torrential rains and winds of more than 130 km / h, according to the meteorology.

Can the “radicalism” of Sandrine Rousseau sweep Yannick Jadot to the environmentalist primary?