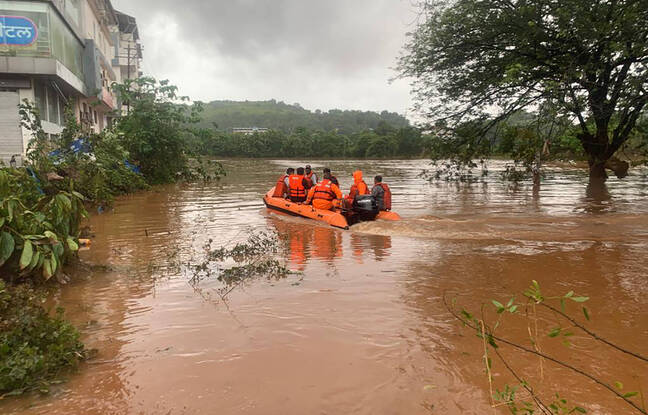 New weather-related disaster. Landslides and flooding have left at least 76 people dead in western India. At least 59 people were still missing, said the government of the state of Maharashtra, of which Bombay is the capital, following multiple incidents linked to the monsoon.

Two other people died in landslides in the district of Satara, Anirudha Ashtaputre, spokesperson for the state government of Maharashtra told AFP, and about 15 are missing.

The navy and the air force intervened to help the thousands of people affected by the floods. But the relief operations are complicated by the landslides which cut several roads, in particular the highway between Bombay and Goa.

More than 24 hours of uninterrupted intense rainfall brought the Vashishti River out of its bed. Neighborhoods in the locality of Chiplun, 250 km from Bombay, were drowned under 3.5 meters of water.

The navy mobilized seven rescue teams equipped with inflatable boats, life jackets and buoys in the affected areas, as well as specialized drivers and a helicopter to hoist the shipwrecked people.

The Indian meteorological department has placed several regions of the state on red alert, specifying that the heavy rains are expected to continue in the coming days.

Torrential monsoon rains were compounded by heavy tides and water releases from several dams pressurized by the accumulation of reserves, according to the government of Maharashtra.

Floods and landslides are common in India during the monsoon season (June-September), which often sees old buildings collapse after days of continuous rain.

Authorities on Friday announced the deaths of 4 people overnight in a building collapse in a Bombay slum, less than a week after 34 people were crushed by a wall collapsing, consecutive to a landslide due to heavy rains.

The rains also caused the flooding of a water treatment center, interrupting the distribution of water in “most of the districts of Bombay”, indicated the authorities of this city of 20 million inhabitants.

Climate change is intensifying monsoon phenomena in India, according to a report by the Potsdam Climate Impact Research Institute (PIK). This report warns of the possible consequences of this development on food, agriculture and the economy in a country representing one fifth of the world’s population.