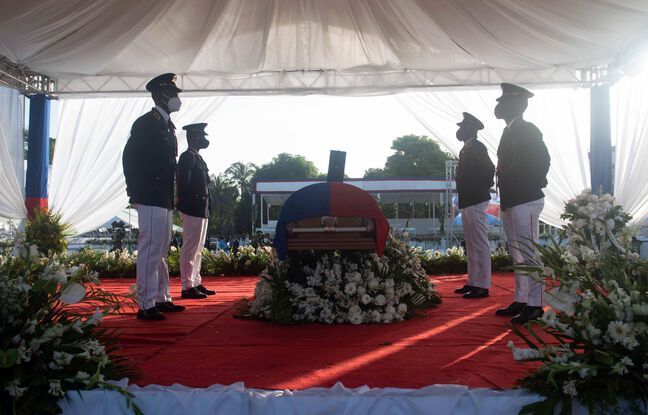 State funerals under high security. This Friday, Haitians paid their last tribute to their assassinated president Jovenel Moïse, killed by an armed commando on July 7 at his home in the capital Port-au-Prince.

The solemn ceremony took place in Cap-Haitien, the northern metropolis of Haiti. Police officers had been deployed all over the streets but they did not prevent, like the day before, an outburst of aggression.

Gunshots even resounded outside the compound where the funeral was taking place, forcing the hasty departure of some participants in clouds of tear gas launched by the police.

Jovenel Moïse’s coffin, covered with the national flag and the presidential scarf, was exposed on an esplanade, adorned with flowers. The remains were guarded by soldiers from the Haitian armed forces.

Martine Moïse, the president’s widow, seriously injured in the attack, was present, her arm in a sling after being treated in a hospital in Florida. Her face crossed out with a mask bearing a photo of her husband, she bowed to her coffin.

Representatives of foreign delegations, the diplomatic corps and members of the government had followed one another to offer him their condolences.

US President Joe Biden sent a delegation led by Linda Thomas-Greenfield, the US ambassador to the UN, also including Daniel Foote, the new US envoy for Haiti. They didn’t last forever.

“The presidential delegation is safe and complete after the shooting reported at the funeral,” said Jen Psaki, White House spokeswoman. “The people of Haiti deserve peace, security and a better future,” said Linda Thomas-Greenfield, back in the United States.

A battalion paid military honors to the head of state, who was 53 years old, including the presidential anthem, followed by the national anthem. The religious office was headed by five priests.

The president’s widow paid tribute to her husband, to the successful entrepreneurial career before entering politics, and lamented his tragic end, “savagely murdered”, “abandoned and betrayed”.

“What crime have you committed to deserve such punishment? Asked the grieving wife, wearing a black hat. “He was well aware of the vices of this rotten and unjust system”, affirmed Mrs. Moïse, “this system which little before him wanted to attack”. “He found himself overnight with the whole system as a whole, in front of him”, she continued, adding, however, not wanting “neither revenge nor violence”.

Tensions in the country

These praises contrast with the strong mistrust that Jovenel Moïse aroused before his death among a large part of the civilian population, who accused him of inaction in the face of the crisis, and of authoritarian drift, after he had suspended the parliament.

Still, the assassination of the president has further plunged the country into uncertainty and resurfaced historical tensions within the population.

Present in Cap-Haitien, the director general of the national police, Léon Charles, was particularly attacked Thursday by residents who accused him of having failed to protect President Moïse, the child of the country.

The inhabitants of northern Haiti recall that Jovenel Moïse is the fifth head of state from their region to have been killed in the West, where the capital, Port-au-Prince is located. Some accuse the wealthy class of Western Haitians of having carried out these assassinations.

This resentment put Cap-Haitien in turmoil on Friday, with roads blocked by barricades and flaming vehicles. Private companies were set on fire. Foreign and local journalists have been assaulted by protesters.

On Thursday, residents had already erected barricades on the national roads leading to the city in order to prevent the inhabitants of Port-au-Prince from coming to attend the funeral.

Ariel Henry, the new prime minister who took office on Tuesday, promised to bring the assassins of the head of state to justice and to organize presidential and legislative elections demanded by the population and the international community.

In the middle of the day, the body of Jovenel Moïse was buried in small groups in the privacy of the gardens of the family residence.