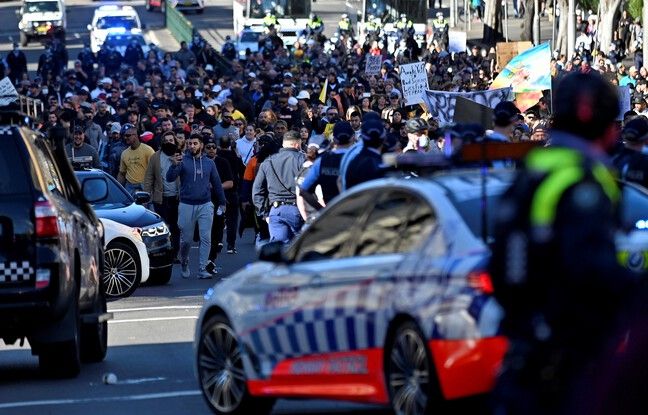 A strong mobilization and violence this Saturday in Australia on the sidelines of anti-containment demonstrations. In Sydney, clashes took place between police on horseback and protesters who threw flowerpots and bottles at them as residents were ordered to stay at home for a month to stem the resumption of the Covid-19 epidemic .

In Melbourne, local media reported that thousands of people took to the streets after rallying outside the Victoria state parliament in the early afternoon.

The protesters, who were not wearing masks, broke rules on non-essential travel and public gatherings issued by the authorities, the latter having hinted that the measures could apply until October. Signs read “Wake up Australia”, slogans echoing messages seen at similar protests overseas.

57 arrests in Sydney and six in Melbourne

Helicopters flew over Sydney, a city of five million people struggling to contain an epidemic recovery from the Delta variant of the coronavirus as the state of New South Wales (of which it is the capital) recorded 163 new cases on Saturday , bringing the current total number of infections to nearly 2,000.

Police said they had fined around 100 people, made 57 arrests in Sydney and six in Melbourne. She said she was defending “freedom of expression and peaceful assemblies”, saying that Saturday’s demonstration violated “the public health orders in force”.

Hundreds of police responded to the Sydney protest, and several protesters were pulled from the crowd by law enforcement in handcuffs.

“I am totally disgusted by the illegal protesters in the city today, whose selfish actions have compromised the safety of all of us,” Gladys Berejiklian, Premier of the State of New South Wales, said in a statement. . “The demonstrators have shown total contempt for their fellow citizens who are currently struggling,” she added.

NSW Police Minister David Elliott said a team of investigators were viewing the footage to identify and charge as many people as needed in the days ahead.

“Unfortunately today in Sydney we saw the sad spectacle that we have seen in other cities,” Elliott told media after the protest.

“It’s pretty clear that Sydney is not safe from idiots,” he added, adding that he expected the rally to spike Covid cases. He also urged those present to get tested and self-isolate.