Tens of thousands of Brazilians demand the impeachment of Bolsonaro 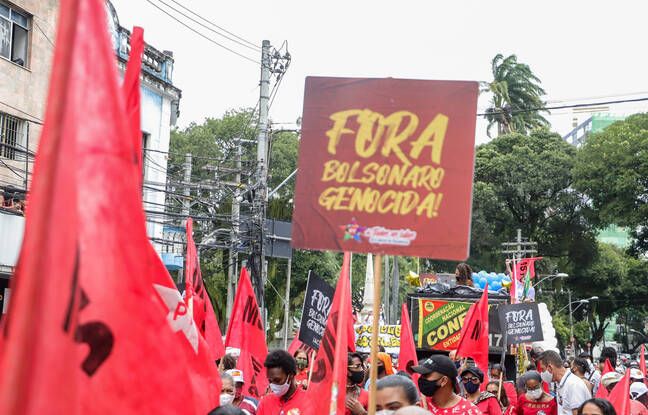 Tens of thousands of Brazilians took to the streets on Saturday, demanding the impeachment of President Jair Bolsonaro for his management of the health crisis as the toll of the epidemic exceeds half a million dead. Protesters marched for the fourth weekend in a row at the call of left-wing parties and unions, in particular against the far-right president, who is being investigated for allegedly turning a blind eye to hijackings of public funds in the purchase of vaccines.

In Rio, thousands of people dressed in red and wearing masks marched under slogans like “Out the corrupt criminal”. The organizers had called for demonstrations across the country “to defend democracy, the lives of Brazilians and to put Bolsonaro out”. In Rio as elsewhere, demonstrators denounced the late start of the vaccination campaign in Brazil, massive unemployment, and demanded more aid for the poor populations facing the pandemic.

“It is very important that anyone who feels offended or oppressed by this government comes out into the streets because we have to fight for the return of democracy,” said Laise de Oliveira, a 65-year-old social services worker. The Brazilian press reported in the afternoon demonstrations in 20 of the 26 Brazilian states. Neither the organizers nor the authorities had released estimates of the number of demonstrators at this time. But large demonstrations were expected in Sao Paulo, the most populous Brazilian city with 12.3 million inhabitants, and in the capital Brasilia.

Jair Bolsonaro is facing the worst moment of his presidency that began in 2019. His approval rating has hit a low of 24% and polls suggest he would lose the October 2022 presidential election to his left-wing predecessor Luiz Inacio Lula da Silva, whose Workers’ Party supported Saturday’s protests. Brazil has officially recorded nearly 550,000 deaths from Covid-19, a toll exceeded by the United States alone, whose population is 120 million higher than that of the South American giant.

Jair Bolsonaro has been openly skeptical of the health crisis, the need to wear a mask and other measures to reduce the spread of the virus. The opposition presented an impeachment complaint on June 30 consisting of 20 different charges against the president, but Jair Bolsonaro still has enough support in Congress to block these initiatives.