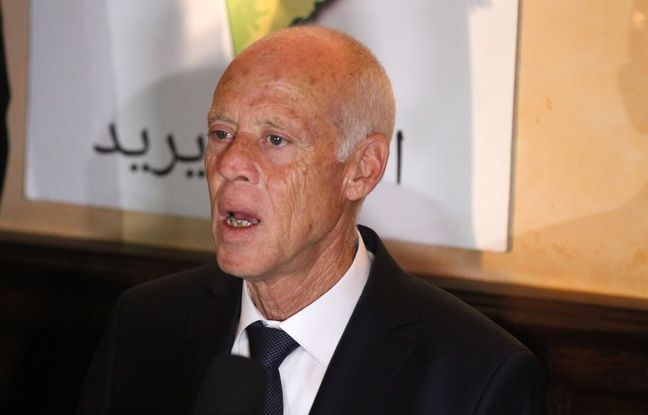 Tunisian President Kais Saied sacked the Defense Minister on Monday, the day after his decision to suspend the activities of Parliament and sack the Prime Minister, exacerbating the crisis in which the young democracy has been plunged for months. After a day of demonstrations on Sunday in many cities of the country against the management of the coronavirus epidemic by the government of Hichem Mechichi, President Saied sacked the latter and announced “the freezing” of the activities of Parliament for 30 days.

He granted himself executive power, announcing his intention to appoint a new prime minister and making changes in government. On Monday, the Presidency of the Republic announced in a press release the dismissal of Defense Minister Ibrahim Bartagi and government spokesperson Hasna Ben Slimane, also Minister of the Civil Service and Acting Minister of Justice. Ennahdha, the main party in Parliament, criticized these measures, denouncing “a coup against the revolution and against the Constitution”.

On the other hand, the General Union of Tunisian Workers (UGTT), an influential central trade union, implicitly supported the decisions of Kais Saied considering that they were “in conformity” with the Constitution, while calling for the continuation of the democratic process, more ten years after the uprising that led to the fall of Ben Ali. “It is time” that the parties responsible for the “degraded” situation in the country “assume their responsibilities”, said the union.

Several countries have said they are “worried” about this dramatic turn of events which is plunging Tunisia into the unknown. Ankara, an ally of Ennahdha, notably called for restoring “democratic legitimacy”. Germany called for “respect for civil liberties, which is one of the most important gains of the Tunisian revolution” of 2011, often presented as the only successful one of the Arab Spring.

The fear of a setback to the freedoms acquired in 2011 was heightened after the closure on Monday of the office of the Qatari channel Al-Jazeera in Tunis by the police, without a court decision or other explanation than the application of ” instructions “. Several hundred supporters of President Saied and Ennahdha exchanged throwing bottles and stones in front of Parliament in Tunis for several hours in the middle of the afternoon, AFP journalists noted.

The Speaker of Parliament Rached Ghannouchi, also head of Ennahdha, called for mobilization and remained for nearly 12 hours in front of the Assembly sealed off by the military to demand the right to access it. According to Ennahdha, the Bureau of the Assembly, meeting outside Parliament, called on the army and the security forces to “side with the Tunisian people and fulfill their role of protecting the Constitution”.

Worsening of the epidemic

For six months, the standoff between Rached Ghannouchi and Kais Saied has plunged Tunisia into a constitutional crisis. The decisions of Kais Saied aim to “change the nature of the political regime in Tunisia and to move it from a parliamentary democratic regime to a presidential, individual and authoritarian regime,” said Rached Ghannouchi in a statement published on the official page of ‘Ennahdha. Kais Saied assured to have suspended the Parliament under article 80 of the Constitution, which envisages exceptional measures in the event of “imminent danger”.

This article applies for 30 days, after which the Constitutional Court is responsible for deciding on their possible renewal. But since the adoption of the Constitution in 2014, the political calculations of the parties have prevented the establishment of this key institution of democracy. Since the beginning of July, Tunisia has been facing an epidemic peak, with one of the worst official death rates in the world. The country of 12 million people has recorded more than 560,000 cases, including more than 18,000 deaths.

Last week, Hichem Mechichi sacked his health minister as cases skyrocketed, the latest in a series of health ministers to be sacked.
Ennahdha’s allies in the coalition, Qalb Tounes and the nationalist Islamist movement Karama, have condemned Kais Saied’s decisions. In the opposition, the Democratic Current, a socio-democratic party which has repeatedly supported Mr. Saied, rejected his seizure of power, nevertheless imputing the responsibility for “popular tension and the crisis. […] to the government coalition in power.