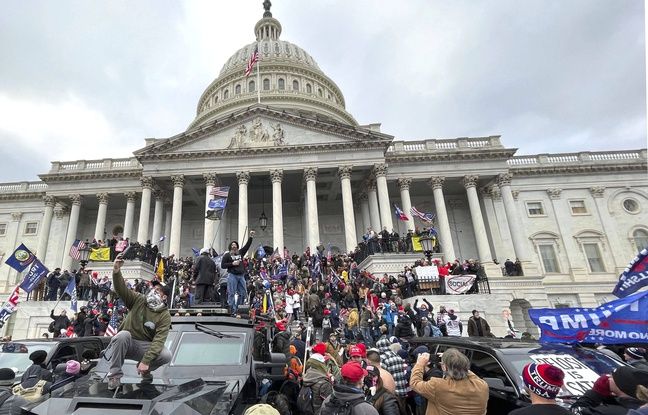 Police officers traumatized by the assault on the Capitol testify Tuesday in front of elected representatives of Congress at the opening of the work of a commission of inquiry which is causing great controversy in Washington. Four agents will follow one another from 9:30 a.m. (1:30 p.m. GMT) in the imposing neoclassical building that they tried to defend on January 6 against hundreds of supporters of Donald Trump who came to disrupt the certification of Joe Biden’s victory in the election. presidential.

Members of the Capitol or Washington police, they are unlikely to make any disclosures but will testify to the physical and verbal violence of the attack, which deeply shocked America and the world. One of them, Michael Fanone, suffered cardiac arrest and head trauma in the assault, which he has since described as “the most brutal, savage clinch” of his life. . Another, Aquilino Gonell, a former soldier, was severely beaten with the flagpole.

These testimonies are all the more “important that some are trying today to revise history and present January 6 as a simple tourist visit”, declared Monday on CNN the elected Democrat Adam Schiff, who sits in of this commission of inquiry.

The commission, which will have the power to demand documents and summon witnesses, has been the subject of a political standoff that weighs on its credibility. In January, the officials of the two parties had all condemned the attack on the Capitol, the Republican leader in the House Kevin McCarthy going so far as to mention the part of “responsibility” of Donald Trump, who had harangued the crowd with his allegations unfounded by “electoral fraud” a few moments earlier.

But the former president, still very popular among part of the population, quickly reaffirmed his hold on the party, which allowed him to be acquitted in February after a trial in Congress for “Incitement to insurrection”.

His refusal to question any question then prompted the Republicans, who have a blocking minority in the Senate, to torpedo the creation of an independent commission of inquiry made up of experts appointed by the two parties, like the one put in charge. place after the September 11 attacks. The current judicial investigations – more than 550 people have been arrested – and the hearings already carried out in Congress to understand the failings of the intelligence services, the police or the army, are more than enough, they had justified.

The commission is “a sham”

After this setback, the Democrats moved forward alone, with House Speaker Nancy Pelosi in charge. On June 24, she announced the creation of a “special commission” made up of elected officials and said she hopes Kevin McCarthy will appoint “responsible people” to be part of it.

Almost a month later, she rebuked two of the parliamentarians chosen by the Republican official, including the elected Jim Jordan, known for his outrageousness and his absolute loyalty to Donald Trump. In retaliation, Kevin McCarthy withdrew the other members of his party selected to sit on this commission.

Only two Republicans, directly chosen by Ms. Pelosi, agreed to participate: Liz Cheney and Adam Kinzinger, rare voices of the Grand Old Party to openly dare to criticize Donald Trump, whom they even deemed “guilty” at the end of his second. impeachment trial. The commission is “a sham” whose “result is predetermined”, thundered Kevin McCarthy by accusing these two elected officials of being in the service of Nancy Pelosi. A comment deemed “childish” by Liz Cheney. Donald Trump for his part considered this commission “highly biased”, in a statement Monday, seeming to attribute unfounded part of the responsibility for the events of January 6 to … Nancy Pelosi.