What do we know about the political crisis that is shaking the country? 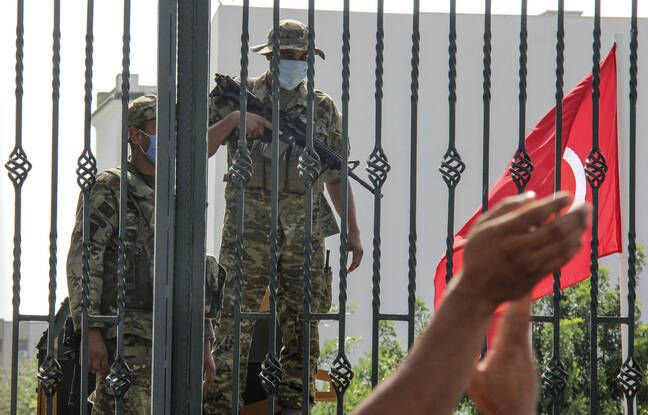 After sacking the Minister of Health last week, Tunisian President Kaïs Saïed carried out a real coup. Sunday evening, after a day of demonstrations, he suspended the work of Parliament for thirty days and sacked his Prime Minister, Hichem Mechichi.

In the wake of Monday, Kaïs Saïed also separated from his defense and justice ministers. These serial dismissals plunge Tunisia into a political crisis which is added to the economic and health crisis which is already hitting the country hard and leaves room for many uncertainties.

Why did the president dismiss his prime minister and suspend the activities of Parliament?

“He fired the Prime Minister because the latter was becoming very unpopular, in particular because of his management of the pandemic”, explains to 20 Minutes Khadija Mohsen-Finan, political scientist and author of the book Tunisia, learning about democracy. The controversy would have particularly swelled in recent days, when Hichem Mechichi gave permission to all adult Tunisians to be vaccinated without an appointment during the religious holidays of Eid. “It was very poorly organized, the doses were insufficient and many people found themselves in line”, comments Khadija Mohsen-Finan who is currently there.

“I took decisions that the situation requires in order to save Tunisia, the State and the Tunisian people,” said President Kaïs Saïed. But behind this immediate reason, there are other deeper ones. “We know that the President and the Prime Minister got along very badly. Kaïs Saïed wanted the way open to proceed with an overhaul of governance. He therefore marginalized the other two heads of the executive, ”analyzes the specialist in the Maghreb and the Arab world, also a teacher at the University of Paris-I (Panthéon-Sorbonne).

The president assured to have taken this decision based on the Constitution. Adopted in 2014, this compromise Constitution operates under a mixed parliamentary system, in which the president has only diplomacy and security as prerogatives. Kaïs Saïed says he relied on article 80 of the Constitution, which authorizes him to “take exceptional measures” in the event of “imminent danger to the country”.

A justification that does not convince everyone. The Ennahdha party blasted “a coup against the revolution and against the Constitution”. Jurists also question the legitimacy of this action with regard to article 80 of the Constitution. “This article indicates that in order to carry out this coup, the President must consult the Prime Minister and the Head of Parliament. However, the two deny having discussed it ”, indicates Khadija Mohsen-Finan. Furthermore, the text does not provide for a freeze on the work of Parliament. “On the contrary, article 80 says that Parliament must be in session. So the Constitution is not completely respected. “

Could the Tunisian people blame its president for it?

“People expect so much for a change that they are ready not to be slaves to the Constitution, although they have always been very dependent on reading this text”, assures Khadija Mohsen-Finan. Indeed, after the announcement of the dismissal of the Prime Minister and the freezing of work in Parliament, Tunisians, exasperated by power struggles and the contested management of the social and health crisis, took to the streets despite the cover-up. fire, firing fireworks and honking enthusiastically in Tunis and several other towns. “People absolutely want to move on and get rid of Hichem Mechichi who governed very badly, like Ennahda”, adds the political scientist.

Are there immediate risks for Tunisian democracy?

Although we still have little perspective on the situation, the accumulation of these decisions could quickly weigh heavily on the still young democracy of Tunisia. “We have a concentration of powers that the Head of State grants himself in a country where there are no checks and balances since there is no Constitutional Court. We have a hyperpresidence which presents itself as a way out of the crisis, but it also recalls the dark hours of authoritarianism that Tunisia experienced from independence to the pre-revolutionary period of 2011 ”, analyzes Khadija Mohsen-Finan .

For now, opacity remains and no election schedule has been announced by the presidency. This exceptional regime is supposed to last 30 days and civil society will have to ensure that this deadline is respected. The coming month should be devoted to managing the pandemic. “The president will operate in concert with the army to manage international aid. He will have to subsequently or at the same time announce an electoral calendar and apply reforms on the economic and social plan, underlines the political scientist. It is expected that in the long term there will be a change in the political regime. We do not yet know if he will move towards direct democracy as he had announced during his electoral campaign. Nothing is certain. “

Can injunctions from abroad influence the situation?

Internationally, the reactions were not long in coming. French diplomacy has let it be known that it wants “the return, as soon as possible, to normal functioning of institutions” in Tunisia. White House spokeswoman Jen Psaki also reacted saying the United States was “concerned” and called for respect for “democratic principles” in the country.

Although the two states provided health assistance to Tunisia last week as the country faced an explosion in coronavirus cases, these calls will not necessarily have a direct influence. “Officially the government will not necessarily take this into account. However, at the level of intellectuals and the media which can indirectly influence power, this can play a role, ”assures Khadija Mohsen-Finan. The fear of a backtracking on the freedoms acquired in 2011 was however accentuated after the closure on Monday of the office of the Qatari channel Al-Jazeera in Tunis by the police, without a court decision or other explanation than the application of ‘” instructions “.