In front of Congress, police officers describe their “medieval” battle against “terrorists” 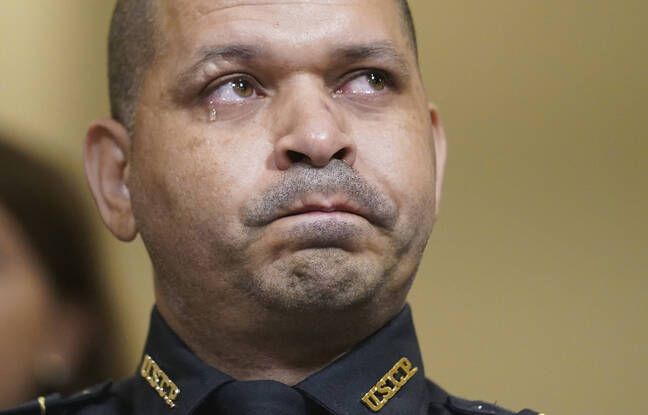 Anger and tears. Police officers on Tuesday emotionally described the physical and verbal abuse they suffered in the Jan.6 assault on the Capitol, telling a congressional commission of inquiry how they feared for their lives in the face of supporters of the former President Donald Trump. According to them, it is “shameful” to seek to downplay the seriousness of the insurgency, as the former US president and many elected Republicans do, who have compared the attackers to “ordered tourists”.

US Capitol Sgt Aquilino Gonell: “What we were subjected to that day was like something from a medieval battle. We fought hand to hand … the rioters that attempted to reach the Capitol were shouting, ‘Trump sent us’ … I recall thinking to myself, ‘this is how I’m gonna die'” pic.twitter.com/gcqzKjv6JX

Capitol policeman Aquilino Gonell, a former military man who fought in Iraq, said the injuries sustained from the blows of the attackers resulted in multiple wounds requiring several surgeries. “In Iraq, we expected gun violence, because we were in a war zone. With my experience in the army and the security services, nothing prepared me for what we were faced with on January 6, ”he said.

It was “like a medieval battle. We fought hand to hand, centimeter by centimeter to prevent the invasion, ”said Aquilino Gonell. “I thought I was going to die like that,” he said, wiping away tears. “I almost died that day. Not once, but several times ”.

“Kill him with his weapon”

Michael Fanone, of the Washington municipal police, called the assault, carried out to prevent elected officials from certifying the victory of Democrat Joe Biden in the presidential election, as “brutal”. “I was caught, beaten,” targeted by an electric Taser gun, he said. “I was treated as a traitor to my homeland”.

“At one point, I was pulled away from the other officers, in the middle of the crowd,” he added. “They tore off my badge (…), they took my ammunition. They started hitting me with their fists and what looked like metal objects ”. An attacker “threw himself at me several times and tried to take my gun from me. I heard people shouting in the crowd: take his gun and kill him with his gun, ”he continued.

Michael Fanone, who suffered cardiac arrest and head trauma during the assault, denounced the attempts of some elected Republicans to downplay the seriousness of the assault. “The indifference shown to my colleagues is shameful! He said, banging his fist on the table.

Capitol policeman Daniel Hodges, who had been filmed screaming in pain, trapped by attackers against a door, called them “terrorists”. “The terrorists had a wall of shields that they had stolen from the police, as well as stolen batons,” he said.

A man then threw a shield against him. “My arms were immobilized (…), I was helpless,” he said. “In front of me, a man sees that he can take advantage of my vulnerability, he grabbed my gas mask and used it to bang my head against the door.” “The man in front of me tore off my baton,” he added. “He hit me with it on the head and on the face, he cut my lip open and he hit me on the head again. (…) I did the only possible thing, I called for help. “

African-American Harry Dunn said the crowd threatened him because of the color of his skin, which traumatized him and the other police of color in charge of security at the Capitol. “Until then, I had never seen anyone physically attacking a Capitol policeman or a municipal policeman, let alone a crowd attacking policemen,” he said.

“I saw the rioters use all kinds of weapons against the police, including pickets, bicycle racks they had taken down and all kinds of projectiles.” He recounted how about 20 people surrounded him before calling him a “nigger” (“nigga”), which represents the gravest racist insult to African Americans: “Never, never had anyone treated me before. of negro while I was wearing the uniform of a Capitol police officer ”. “We must never again allow our democracy to find itself as threatened as it was on January 6,” he added.

The compulsory mask at the nursery? What we know about this viral video