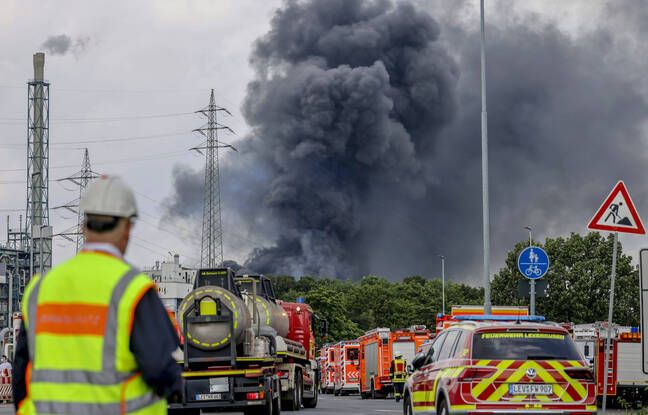 The toll of the explosion of a chemical site in Germany is expected to increase. While already two people were found dead after the incident at the waste treatment plant on Tuesday, five employees are still missing. “Unfortunately, we believe that we will not find the missing alive,” Frank Hyldmar, head of the Currenta group, owner of the plant, said Wednesday at a press conference in Leverkusen, western Germany.

Four of them are Currenta employees, the other is a colleague of an external company, he said. Lars Friedrich, the director of the industrial park specializing in chemicals near which the disaster occurred, had already recognized the day before that hopes of finding them alive were dwindling. Rescue operations continued on Wednesday but were made difficult by the heat still emerging from the blaze. The teams must also take into account the possible presence of toxic substances since the explosion caused the fire in tanks of chemical solvents.

31 injured, including one serious in the neighboring town

The explosion, heard several tens of kilometers away, had caused an immense plume of black smoke. It also left 31 injured, including one serious and caused a shock in Leverkusen, an industrial city of some 160,000 inhabitants and stronghold of the giant Bayer.

To protect themselves from any harmful fallout, the authorities had asked the inhabitants of Leverkusen “to go to closed rooms, turn off the air conditioning and, as a precaution, keep the windows and doors closed”. It was still recommended Wednesday to residents not to touch residue from the disaster, and to wash fruits and vegetables from their garden. Toxicological analyzes are still in progress.

“We are working to determine the causes of the accident,” added Frank Hyldmar, judging that it was still too early to move forward. The damage could have been more serious: a risk of explosion in a second tank which contained 100,000 liters of highly flammable toxic waste remained after the fire, said the regional Minister of the Interior of North Rhine-Westphalia, Herbert Reul. This danger was avoided thanks to the intervention of more than 300 firefighters.

Threat over holding an EU / US technology council