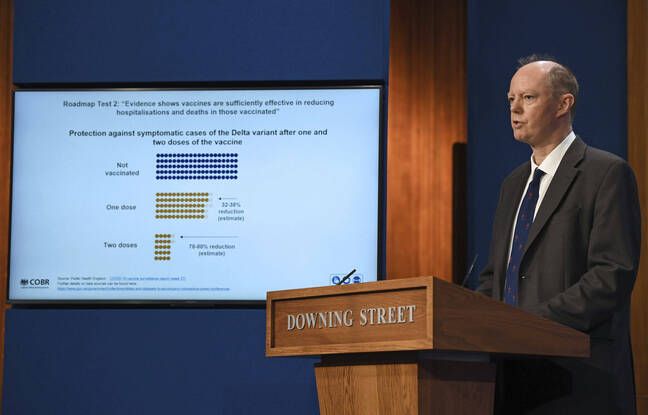 British justice on Friday sentenced a 24-year-old man to an eight-week suspended sentence and a hundred pounds (117 euros) in fine for an assault on England’s chief medical officer Chris Whitty, a leading player in the fight against the Covid-19.

In videos widely shared on social media at the end of June, two hilarious men are seen touching Chris Whitty and putting their arms around his shoulders as he tries to extricate himself, visibly embarrassed. The scene had prompted many calls for the professor to be given close protection.

A “shocking and shameful behavior”

Lewis Hughes, 24, has pleaded guilty to assault with beating in the June 27 incident in St James’s Park, near the Prime Minister’s residence in Downing Street. He demonstrated “shocking and shameful behavior,” prosecutor Kalsoom Shah ruled at the hearing on Friday. He “showed little regard for himself and the rules of physical distancing when he accosted the chief medical officer on the street,” Kalsoom Shah added.

The second man, Jonathan Chew, 24, pleaded not guilty to him on Friday, also denying that he intentionally obstructed police officer Steven Ozden the same day. He has been released on bail and will have to appear in court on November 23 for his trial.

In early July, the two defendants told the tabloid The Sun that they didn’t mean to hurt Chris Whitty. “We just wanted to take a selfie,” Jonathan Chew told the tabloid, while his friend apologized and explained that he had lost his job as a real estate agent after the video was released.