“Say the election was corrupt and I’ll take care of the rest,” Donald Trump told his justice minister 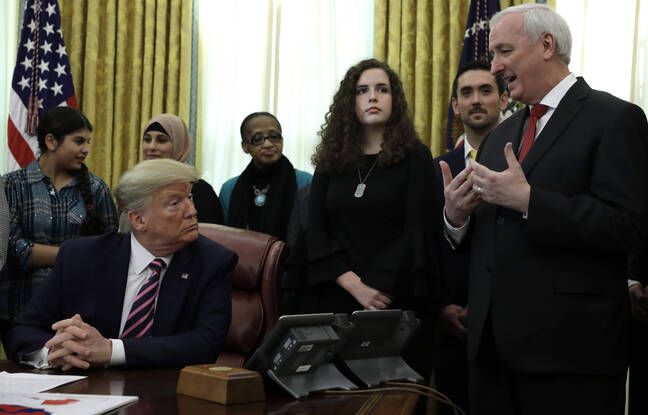 Every day, we learn a little more about the tumultuous period between November 3 and January 20. A week before his supporters stormed the Capitol, Donald Trump pressured the acting justice minister to back his accusations of presidential election fraud, according to documents released on Friday.

“Just say the election was corrupt and I’ll take care of the rest,” said Donald Trump. “Please understand that the Department of Justice cannot and will not snap its fingers and change the outcome of the election, it does not work like that”, replied Acting Justice Minister Jeffrey Rosen, to the Republican billionaire. Jeffrey Rosen also told Donald Trump that the ministry had looked into his allegations of voter fraud and found no evidence. “We have an obligation to tell people that it was an illegal and corrupt election,” retorted the outgoing president. This astonishing exchange took place on December 27, 2020, a month and a half after Joe Biden’s victory in the ballot, according to notes taken by the number 2 of the ministry, Richard Donoghue.

Shortly before, Donald Trump had already been let go by the Minister of Justice Bill Barr. In an interview with AP, the latter had indicated that there was no evidence of massive fraud, arousing presidential wrath. According to Axios, the tone rose during a meeting. Bill Barr assured that his services had investigated the accusations of fraud and that it was “bullshit”. A week later, Barr submitted his resignation.

This conversation took place just days before the assault on Capitol Hill by supporters of the president. The notes were released on Friday by a House of Representatives committee investigating the riot. “These handwritten notes reveal that President Trump directly ordered our main law enforcement agency to take action to overturn a fair and free election in his last days in office,” the elected official said. Democrat Carolyn Maloney, chair of the committee, in a statement.

In parallel, the anti-corruption group Citizens for Responsibility and Ethics (CREW) filed a new complaint Thursday, asking the Department of Justice to investigate Donald Trump and his chief of staff Mark Meadows for trying “to manipulate the ministry of Justice as part of their wider campaign to overturn the 2020 presidential election results ”.

Lille is far from having solved all its problems