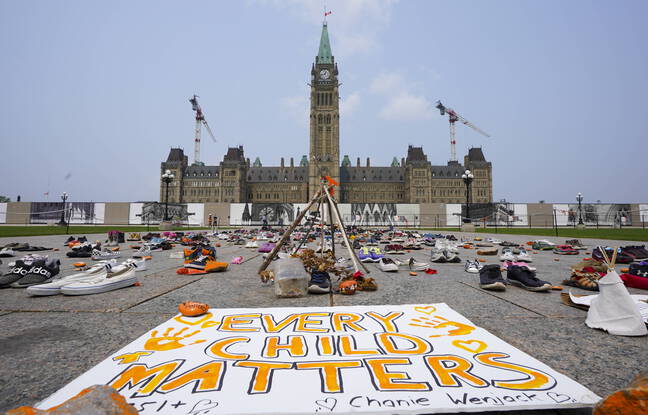 A few hundred people demonstrated in the Canadian capital on Saturday to demand an independent investigation into residential schools, after the recent discovery of anonymous graves near several of these establishments. Protesters gathered on Parliament Hill in Ottawa at the call of two MPs from the New Democratic Party (NDP – left).

“Indigenous peoples need truth and justice: it means a special prosecutor and an independent investigation, with the presence of international observers, into Canada’s crimes against Indigenous peoples,” said Nunavut MP Mumilaaq Qaqqaq , in a post on Instagram. ” That’s enough ! Justin Trudeau and (Minister of Justice) David Lametti must stop making excuses and make sure we have a special prosecutor, ”MP added.

“These are not accidents”

The NDP asked the government of Prime Minister Justin Trudeau in early July to set up a special prosecutor with the powers and means to conduct an independent investigation into residential schools for indigenous people. “People were shocked by the number of graves discovered (…) These are not accidents. This represents a policy aimed at destroying a people, ”MP Charlie Angus told the CBC public channel.

Since the end of May, more than 1,000 anonymous graves have been discovered near former residential schools, shedding light on a dark page in Canadian history and its policy of forced assimilation of First Nations. Some 150,000 indigenous children, cut off from their families, their language and their culture were forcibly recruited from the late 19th century to the 1990s in 139 boarding schools, often run by the Catholic Church, across the country. Many of them have been subjected to ill-treatment or sexual abuse, and more than 4,000 have died there, according to a commission of inquiry which had concluded to a true “cultural genocide”.