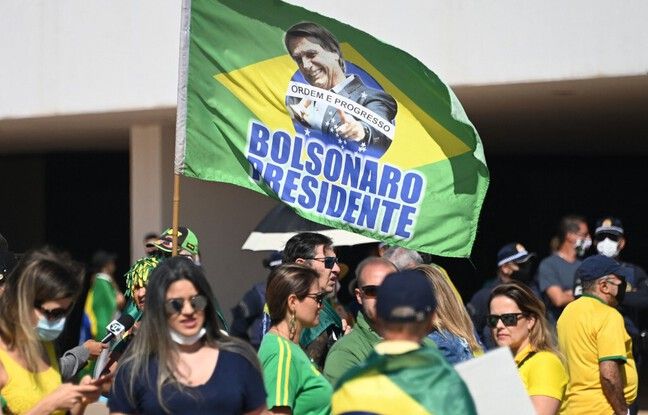 In Rio de Janeiro, around 3,000 people marched on the famous Copacabana Beach, most without masks and dressed in yellow and green, the colors of the Brazilian flag.

“That the votes can be recounted publicly”

“What we want is that the votes can be recounted publicly, for more transparency, because there have already been suspicions of fraud”, told AFP Ronaldo Calvalcante, 46, who was protesting in Rio.

President Bolsonaro, who is aiming for re-election in 2022, is not calling for a return to voting by paper ballots, but the printing of a receipt after each vote on the electronic ballot box, so that the votes can be recounted physically. “Strictly electronic voting is theft! Voting with printed receipts is not complicated, people will adapt, ”said Roxana Guimaraes, a 45-year-old nurse.

Prepare the ground to challenge the result in case of defeat?

For analysts, the far-right leader is trying to prepare the ground to challenge the result in case of defeat, like former US President Donald Trump, of whom he is a fervent admirer.

In Copacabana, a large Brazilian flag with the inscription “Patria Amada” (beloved homeland), the official slogan of the Bolsonaro government, was hoisted on top of a crane, floating in the blue sky of Rio’s most touristy beach.

President Bolsonaro did not take part directly in the demonstration which also brought together several thousand people in Brasilia, but he delivered a speech via videoconference, reiterating that he would not accept elections that were not “clean and democratic ”. He added that he would do “whatever it takes” to enforce the printing of paper receipts for electronic voting.

Thursday, during his weekly direct on Facebook, the Head of State reported for more than two hours of his conviction of fraud during the last two presidential elections, notably estimating that he should have been elected in the first round in 2018. But he has not presented any evidence, while the Superior Electoral Court (TSE) ensures that the current system is completely transparent and has never been peppered with irregularities.

Three weeks ago, Jair Bolsonaro had already aroused an outcry by sowing doubt on the realization of the 2022 ballot. “Either we are doing proper elections in Brazil, or there will be no elections”, had -he assures.

He called TSE President Luis Roberto Barroso a “fool” who said that printing paper receipts could instead expose the vote to “the risk of manipulating the past.”

Last weekend, tens of thousands of people demonstrated in Brazil to demand the impeachment of President Bolsonaro, much criticized for his management of the Covid-19 pandemic, which has left more than 550,000 dead in the country.

Trade unionist, politician, columnist and father … The other lives of René Malleville