The toll triples to more than 300 dead 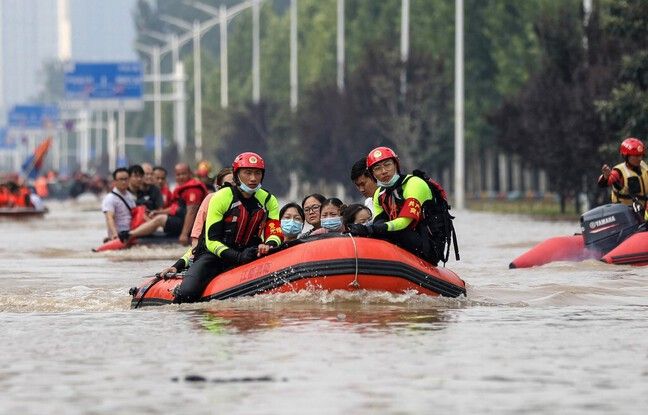 China on Monday announced a much heavier toll of the floods in late July in the center of the country, now citing 302 dead and 50 missing when the equivalent of a year of rain fell in three days.

This is the worst flood record in the Asian country since a landslide in the town of Zhouqu, in the province of Gansu (north-west), which left more than 1,800 dead and missing in August 2010.

A number of deaths that triples

On July 20, the rains that hit the metropolis of Zhengzhou, the capital of the densely populated province, engulfed a subway train, killing 14 of the some 500 passengers trapped during rush hour.

In front of the press, the mayor of Zhengzhou, Hou Hong, said Monday that 39 people had lost their lives in underground parking lots and six in a tunnel, without specifying which one.

Dozens of cars had been swept into a road tunnel, producing a spectacular pile of cars at one of the exits. The exact death toll in this area has not been specified.

The equivalent of a year of precipitation in three days

In three days, the equivalent of nearly a year of precipitation fell in Zhengzhou – unprecedented in six decades of weather records, and enough to fuel concern over the impact of climate change.

Local authorities have been criticized for not ordering the closure of public transport despite weather warnings. The wife of one of the victims has also sued the metro operator for negligence, local media Jimu News reported last week. The authorities clumsily tried to stem any controversy.

Last week, in front of the steps of the particularly damaged Shakoulu metro station, many residents came to bow, drop bouquets of flowers or handwritten messages in memory of the victims. But a sign of the sensitivity of the tribute, movable yellow plastic walls were then installed around this area, causing a stir on social networks. They were then removed.

Covering the bad weather, several foreign reporters were also taken to task by some suspicious or even hostile residents, who accused the journalists of wanting to present China in a bad light. An AFP team was surrounded by about twenty people, some demanding to delete pictures.

Asked Thursday, the spokesperson for the Ministry of Foreign Affairs, Zhao Lijian, indirectly justified these behaviors, which he attributed to “the indignation of the Chinese people” towards the “false information” that would regularly broadcast “some Western media ”about the country.

Share
Facebook
Twitter
Pinterest
WhatsApp
Previous article89 jihadists of the Islamic State group killed in Sinai according to the army
Next articleGreece hit by “the worst heatwave” for more than 30 years, according to its Prime Minister

When it comes to diversity, it’s still a failure