Tension in Bolivia: Santa Cruz celebrates fifth day of strike against the Government with new clashes

The department of Santa Cruz, the largest region and economic engine of boliviamaintains its fifth day of strike this Wednesday with new clashes between civilians who support and reject this measure called in demand that the population census be in 2023.

this journey There were clashes between neighbors who supported the strike for the census and groups of people who showed up at some blockade points to stop the protest and the circulation of vehicles is allowed.

LOOK: Aymaras in Bolivia march to demand attention from the leftist government of Arce

The clashes took place in the the bell avenuenear the popular neighborhood Plan 3,000, for almost 40 minutes in which the sides in dispute stones were thrown and firecrackers detonated aiming them towards their adversaries.

Protesters for and against a strike clash in Santa Cruz. (EFE/ Juan Carlos Torrejon).

At least two people were injured in the scuffle.according to local media reports.

A few minutes later the police arrived and separated the two groups with the use of tear gass and a motorcycle barrier, however, the tension lasted for several more hours.

This is the second day in a row that these events have occurred, since on Tuesday there were clashes also in Plan 3,000Santos Dumont Avenue and at night in Warnes, a neighboring municipality to Santa Cruz.

On the other hand, the “fence” to Santa Cruz that pro-government organizations promote for the second day was felt mainly in the Guillermo Elder Bell refinery, in whose surroundings blockades were installed with tires and other debris. 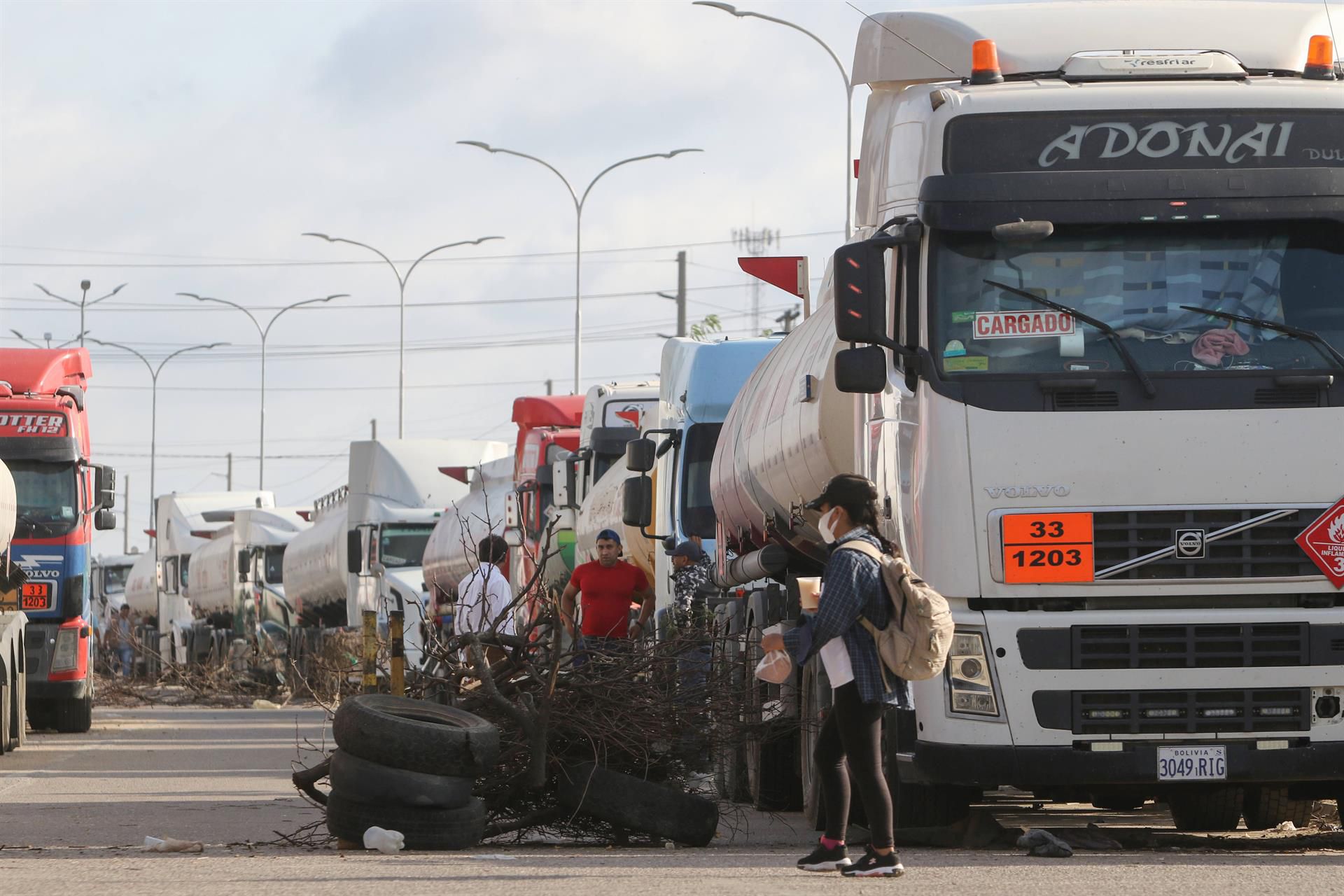 A woman walks past a blockade at the Guillermo Elder Bell refinery in Santa Cruz, Bolivia. (EFE/Juan Carlos Torrejon).

At the entrance of the refinery, a group was established that prevents the entry and exit of fuel trucks that were stopped outside.

On the eve, the state Bolivian Fiscal Oil Fields (YPFB) made efforts to obtain the “normal” supply of hydrocarbons after a provisional agreement with the blockers, but this Wednesday they again prevented the operation of the refinery.

Santa Cruz He leads the protests so that the population census is in 2023 and not in 2024 as the Government ordered last July.

The national survey was initially scheduled for November of this administration.

The National Executive maintains that the census in 2024 favors the quality of the data and a “depoliticization” of the census process. Members of the police make a presence during the disturbances between people who support the strike for the census and those who reject it in Santa Cruz, Bolivia. (EFE/Juan Carlos Torrejon).

The Santa Cruz civic leaders demand that the survey be carried out in 2023 in order to use their data in 2025, the year in which the national elections are scheduled, to apply them to the electoral roll and an allocation of seats in Parliament.

They also seek a new distribution of fiscal resources based on the population’s information.

The Government called for this Friday a “plurinational meeting” for the census in the central city of Cochabamba with governors, mayors and social and indigenous organizations.

Meanwhile, other organizations from regions such as La Paz, Cochabamba and Tarija have declared themselves in favor of the census being carried out next year.