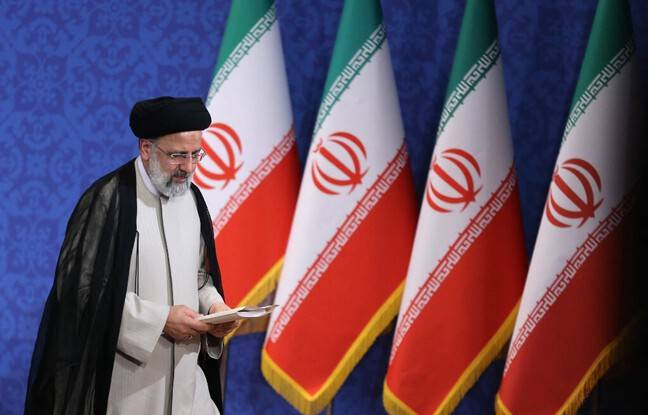 It’s official since Tuesday, August 3. The ultra-conservative Ebrahim Raïssi has been inducted as President of Iran. And the task, for this former head of the Iranian judicial authority, promises to be difficult. He will have to work to turn around an economy undermined by US sanctions and the health crisis, and relaunch talks to save the international nuclear deal.

Winner of the June presidential election marked by a record abstention, Ebrahim Raïssi succeeds the moderate Hassan Rohani, who in 2015 concluded an Iranian nuclear agreement with the great powers, after years of tension.

At 60, Ebrahim Raïssi therefore begins his four-year mandate after the approval of his election by the Supreme Leader, Ayatollah Ali Khamenei. “In accordance with the people’s choice, I am inducting the wise, tireless, experienced and popular man Ebrahim Raïssi as President of the Islamic Republic of Iran”, wrote the Supreme Leader in a decree read by his chief of staff.

Ayatollah Khamenei is due to speak after a short statement from the new president, at a ceremony where, due to the Covid-19 pandemic, only a limited number of officials have been invited. Ebrahim Raïssi will be sworn in on Thursday before Parliament, to which he will have to present his candidates for ministerial posts.

The presidency of Raïssi should confirm the stranglehold of the conservatives on power, after their victory in the legislative elections in 2020. For Clément Therme, researcher at the European University Institute based in Florence (Italy), Mr. Raisi “will improve the economic situation by strengthening economic relations between the Islamic Republic of Iran and neighboring countries”, but also with Russia and China.

In 2018, former President Donald Trump withdrew the United States, a country enemy of the Islamic Republic of Iran, from the 2015 agreement and reinstated American sanctions against Tehran. In retaliation, Iran had abandoned most of its key commitments that limited its controversial nuclear activities.

Sanctions reinstated by Washington have stifled the Iranian economy, including halting its oil exports. In the winter of 2017-2018 and again in 2019, Iran was shaken by demonstrations, against a background of social discontent linked to the economic situation. In July, residents of the oil-rich province of Khuzestan (southwest) demonstrated against water shortages.

The economic crisis has been worsened by the Covid-19 pandemic: the country is the hardest hit in the Near and Middle East. During a speech to the Council of Ministers on Sunday, Hassan Rouhani defended his record. “What we did was in a difficult situation, a consequence of the economic war and the coronavirus, and this year the drought has been added to it,” he said.

Hassan Rohani “believed he would be able to quickly resolve all the country’s problems,” Iranian reformist economist Saïd Laylaz, adviser to several Iranian presidents, told AFP. The outgoing president has shown “idealism” in his policy of opening up to the West: Ebrahim Raïssi will choose a different path, he believes.

Moreover, Ayatollah Khamenei, ultimate decision-maker on sensitive issues such as nuclear, warned last week that “trusting the West does not work”. Donald Trump’s successor Joe Biden has told him he is ready to return to the 2015 deal, engaging in indirect negotiations with Iran alongside talks in Vienna with other parties to the deal – China , France, Germany, Russia, United Kingdom.

While the negotiations seem blocked until the entry into office of Mr. Raïssi, the latter immediately underlined that he would defend “national interests”. And, in a new episode of tensions with the West, Washington and London joined Israel in accusing Iran of being behind an attack on an oil tanker run by an Israeli billionaire in the Arabian Sea, which left two dead on July 29. The United States threatened “an appropriate response”. Iran for its part denied any involvement, warning that it would respond to any “adventurism” if it were targeted.

Olivier Faure widely re-elected at the head of the party