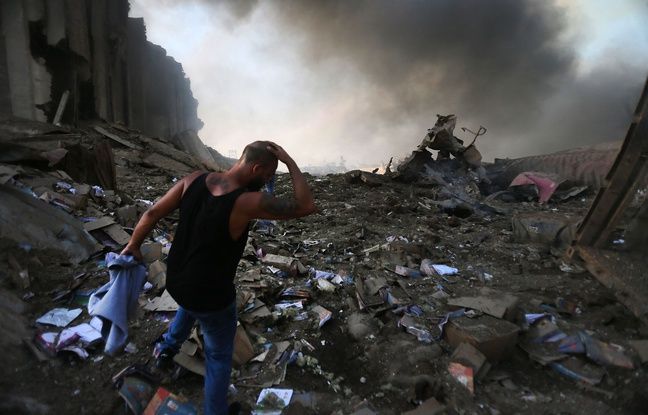 It is a 126-page long report, in which the NGO Human Rights Watch (HRW) does not spare the Lebanese authorities. They are accused of criminal negligence, violation of the right to life and blocking the local investigation into the devastating explosion of August 4, 2020 at the port of Beirut. The NGO recommended the establishment of an independent UN investigative mission and international sanctions against senior Lebanese officials.

The gigantic explosion of August 4, 2020, which left 214 dead and more than 6,500 injured, was triggered by the explosion of several hundred tons of ammonium stored since 2014 in a dilapidated warehouse at the port.

In this report, the NGO documented the multiple failings of political and security authorities in the management of this stock of hazardous materials from its arrival at the port in 2013 until its explosion. Dozens of government officials, customs and security officials who were aware of the dangers, according to the NGO, are identified.

“Several authorities (…) have shown criminal negligence, according to Lebanese law, in the management of the cargo”, summarizes the HRW report, based on several interviews and hundreds of official correspondence, some of which have never been returned. public. “The evidence strongly suggests that some government officials were aware of the (risk of) death that the presence of ammonium nitrate in port could cause and tacitly accepted (to take) this risk,” lamented HRW.

The breaches began in 2013 as soon as the cargo arrived aboard the Moldovan-flagged vessel “Rhosus”, which initially left Georgia for Mozambique, according to the NGO. “Officials from the Department of Public Works and Transport have inaccurately described the risks of the cargo in their demands for the courts to unload the cargo,” HRW said.

They also “knowingly stored ammonium nitrate in the port of Beirut with flammable or explosive materials for nearly six years”, even after receiving reports warning of the “extremely dangerous” nature of the stock, lamented HRW. For their part, the customs authorities, alerted for the first time in 2014 and who could have acted unilaterally to remove the explosives from the port, did not take adequate measures to get rid of them, according to HRW.

As for the Lebanese army, it “took no apparent measures to secure” the stock, according to the report. The military command has even cleared itself of all responsibility, when it should, under Lebanese law, approve the import and inspection of materials classified as usable in the manufacture of explosives.

State Security, which investigated the nitrate stockpile before the explosion, was slow to report the potential threat to senior officials, also providing incomplete information on the dangers posed. by these chemicals, according to HRW.

The then Prime Minister, Hassan Diab, thus received information on the cargo only from June 2020, barely two months before the explosion. “Then I forgot about it and no one followed up. There were disasters every day, ”he told HRW.

For the NGO, the local investigation is “incapable of delivering justice in a credible manner”. She called for a fact-finding mission mandated by the UN Human Rights Council. The NGO also recommended sanctions against all individuals and entities “implicated in continuing violations of human rights (…) and efforts to undermine” the local investigation, while no official has been brought to trial. in court, a year after the tragedy.

“According to international law (…), the failure of a state to act against potential dangers to human life is a violation of the right to life”, added the organization, specifying that the explosion could potentially be assimilated, according to Lebanese law, to premeditated murder or “homicide”.