The government of bolivia temporarily banned the export of six basic food products, including soybeans, sugar and beef, due to a strike in the agricultural region of Santa Cruz.

The export suspension came into force on Thursday at 00:00 due to “a risk of shortages” after five days of strike, the government announced.

LOOK: The race against time to save the place on Earth that is heating up 6 times faster than the rest of the planet

The region of Santa Cruz, considered “the economic engine of the country”, maintains an indefinite strike to demand that the government agree to carry out the population census in 2023.

The government’s position is that this national survey be carried out in 2024.

The Minister of Productive Development and Plural Economy, Néstor Huanca, indicated that due to the strike, “there is a risk of shortages and price increases of the family basket.

He added that the measure will be in force “until normal supply conditions are restored to the entire Bolivian population.”

The foods whose export will be suspended are soybeans, soybean cake, whole soy flour, sugar, oil and beef.

There have been clashes between supporters and opponents of the government. (EPA).

The strike, which began on Saturday, began with clashes between supporters and opponents of the government that left one dead.

Huanca blamed the governor of Santa Cruz, the right-wing Luis Fernando Camacho, and social and business leaders who are leading the protest, “for the consequences of the paralysis of the productive sector and for threatening food security.”

“Only they are guilty of the damage and millionaire losses that are being caused to the Santa Cruz and national productive apparatus,” declared the minister.

And he asked the leaders of Santa Cruz to reflect and dialogue “to resume the production and supply of food on a regular and unrestricted basis to the Bolivian population.”

The region of Santa Cruz, the prosperous department in the east of the country, is a bastion of the opposition and is leading the demands for the census to be carried out in 2023 and its results to be known before the next general elections in 2025.

The census is important because the new allocations of economic resources for regions and municipalities, as well as the quotas for representation in parliament, They depend on their population.

The government of leftist Luis Arce had scheduled the census for next November but decided to postpone it until 2024, which would prevent the new data from being processed before the elections.

The government decided to postpone the survey arguing technical problems and the need to “depoliticize” the process.

But the position of the governor of Santa Cruz, the most populous department in the country, is that the postponement is illegal because the census must be carried out every 10 years.

Governor Luis Fernando Camacho alleges that the data from the previous survey, from 2012, is not reliable for redistributing federal budgets. 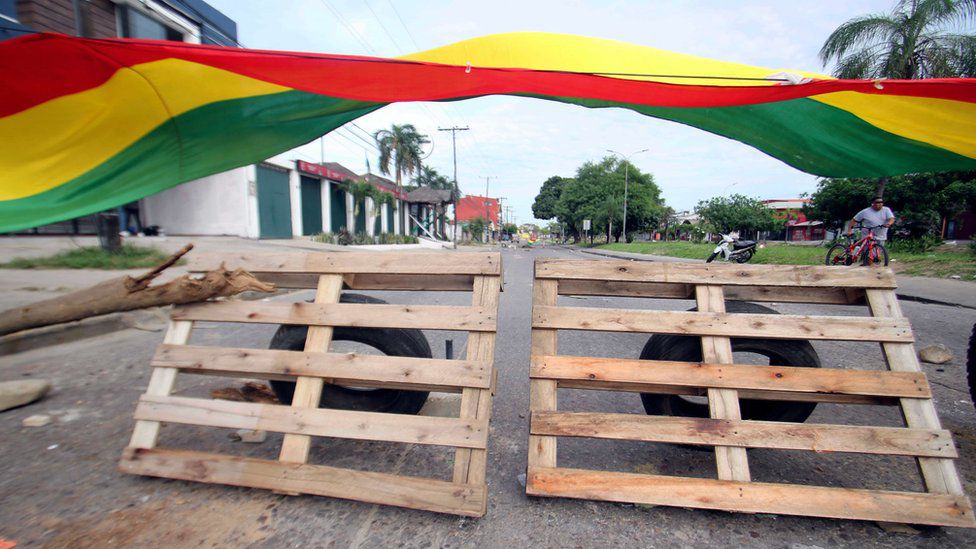 The streets and highways of Santa Cruz were blocked with tires to prevent passage. (EPA).

President Arce called for this Friday a meeting with leaders from all regions of the country for “a multinational meeting” to find “a definitive solution” to the strike and agree on the date of the census. But Camacho announced that he would not attend.

“We are open to dialogue but we are not going to endorse a meeting of ‘masistas,'” the rightist said on Wednesday, referring to the ruling Movement for Socialism (MAS).

“This is where the conflict is. They don’t want us, they don’t consider us Bolivians,” he added.

The protesters who lead the strike in Santa Cruz blocked the way to the streets and routes of Santa Cruz with tires to prevent passage.

Recently the Arce government has faced protests across the country. On Wednesday, it reached an agreement with gold mining cooperatives to stop the protests in the administrative capital, La Paz.

Share
Facebook
Twitter
Pinterest
WhatsApp
Previous article
Still no victory and two new injuries, Lyon remains back to the wall in the Champions League
Next article
the platform will certify doctors’ accounts to limit fake news

A US was arrested Thursday for vandalizing a church in the Old City of Jerusalemthe Israeli police said.The suspect...

A US was arrested Thursday for vandalizing a church...
World