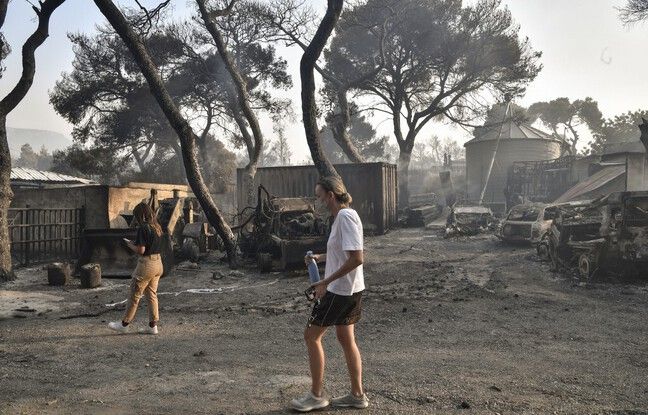 Athens woke up on Wednesday to gray smoke and a pungent smell due to a fire north of the Greek capital, at the foot of Mount Parnes, which firefighters hoped to control “in the next few hours”. The fire broke out on Tuesday afternoon and dozens of homes, taverns and businesses suffered extensive damage in the evening in Varympompi, 30 km northwest of Athens, according to initial estimates by the authorities.

It comes as Greece has been hit for a week by the worst heatwave in three decades, with temperatures exceeding 43 degrees Celsius in places. “We were faced with a difficult fire in extreme scorching conditions,” said Prime Minister Kyriakos Mitsotakis who visited Varympompi, the main village affected by the fire, located in the pine forest at the foot of Mount Parnes. Deputy Minister for Citizen Protection Nikos Hardalias stressed that “the night was exceptionally difficult”.

“There were four fronts” but “currently the fire is in recession, there is only one now”, he said during a press briefing Wednesday morning from the operational center of firefighters in Varympompi. This Wednesday morning, “the situation is better and we hope that the fire will be brought under control in the coming hours”, announced the press service of the firefighters. More than 500 firefighters with five helicopters and a dozen water bombers were still at work Wednesday morning.

After Penteli last week, it was Mount Parnes, the second of three mountains surrounding the Athens Basin, that was hit by fire, spreading ash and smoke over the Greek capital. The central square of Varympompi no longer looked like a ghost village emptied of its inhabitants. More than 300 people had been evacuated from this locality and two other neighboring villages. Nearly 200 horses that were in the equestrian centers in the area have been moved unharmed, according to the Greek Riding Confederation.

Police said they had helped nearly 70 people who were stranded in their homes in communities surrounded by flames. Lung of the capital and frequent weekend getaway for Athenians, Varympompi is located near the ancient royal palace of Tatoï, where precious works have been put away as a precaution. Greece fell prey to nearly 80 fires on Tuesday, according to Nikos Hardalias. At least two other fires were still burning in the country on Wednesday: one in the south of the Peloponnese peninsula in Vassilitsi, 300 km south of Athens and the other on the island of Evia, 200 km to east of the capital where eight villages were evacuated.

A referee beaten and hospitalized after a general fight

Renaud Muselier denies any hospitalization, but suffers from chronic fatigue