“I never knew that my mother had survived the Holocaust”

Michael Goodwin was raised by his adoptive parents in Australia believing that he was of Irish Catholic descent. He grew up trying to find out something about his mother.

But only now, at the age of 80, has he finally found out what happened to his real family and has discovered that he was jewish

LOOK: The dark mystery of the death of Geli Raubal, Hitler’s niece and “his true great love”

Michael was adopted when he was seven by a middle-aged Australian couple; he married, settled in Perth, and raised his own family.

His adoptive parents, who had been told he was of Irish descent, raised him as a Christian.

And yet, inside of him, he had the unsettling feeling that crucial parts of his own story were missing.

“Always I wondered who it wasMichael said.

Michael’s great-aunt, whom he never met, standing by the same monument. (COURTESY).

She tried unsuccessfully to call the authorities of the children’s home where she lived before her adoption. He wanted the documents on her birth family sent to him.

“I ran into a closed door,” he said. “I couldn’t find out anything at all.”

Michael knew that had come to Australia from the UK, where he had lived before his adoption.

Only when, in 2009 and 2010, the British and Australian governments apologized for a policy of forced migration of children, did Michael realize he was one of thousands of people it had happened to.

But he also realized that there was a group that could help him: a UK-based charity called Child Migrants Trust.

The trust was established in 1987 by Margaret Humphreys, a Nottinghamshire social worker, after finding horrible stories of children who were forced to emigrate forced from the UK to countries such as Australia, often without the knowledge of their birth parents.

The movie Oranges and Sunshinestarring Emily Watson, is based on the work of this organization. 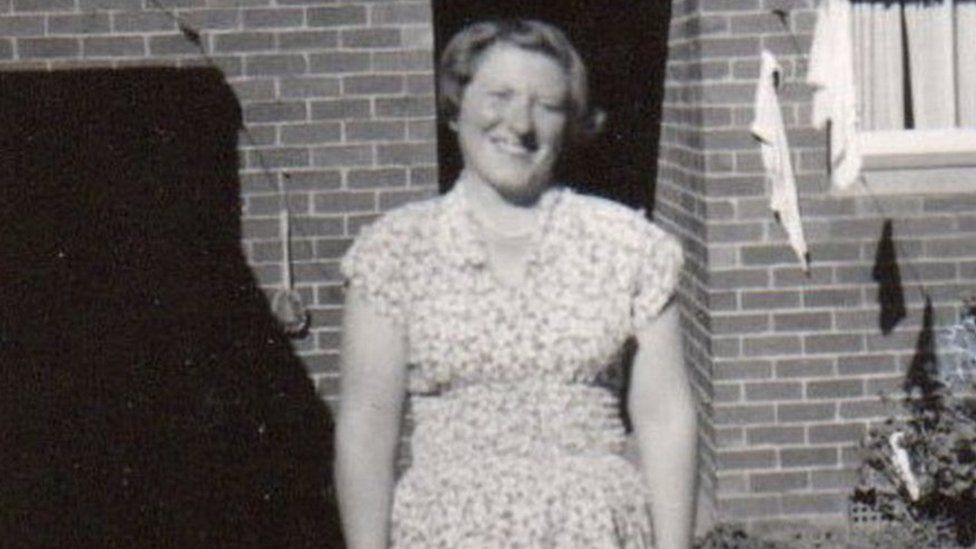 Michael learned that his mother, Ilse, lost her family in the Holocaust and that she went to Australia to try and find it, but was unsuccessful. (COURTESY).

Armed with his birth name, his British passport, and the few facts he knew about his pre-adoption identity, Michael approached the organization’s Perth office.

He knew that he had arrived in Australia on a ship at the age of seven, after being moved from an English children’s home to an Australian one.

They started going through the records to try to find out something about his background.

It turned out that the answer had, in a sense, been right in front of them.

In the office there was a photograph of a group of children on the deck of a ship in Australia after a long voyage.

They managed to identify everyone. those pictured, except for the sad-looking, confused little boy in an oversized coat and scuffed shoes who had had his arm around a fellow migrant.

It turned out that that child was Michael.

Michael had been born Michael Lachmann and, as he learned, was descendant of German Jews.

His mother, Ilse, had fled to England via Italy from Nazi Germany in 1939.

His parents -Michael’s grandparents- and his brother -Michael’s uncle-, who had stayed in Germany, They were killed during the Holocaust.

And tragically, Michael discovered that his mother had wanted to give him a home.

“I realized that I they had stolen my identity“, said. 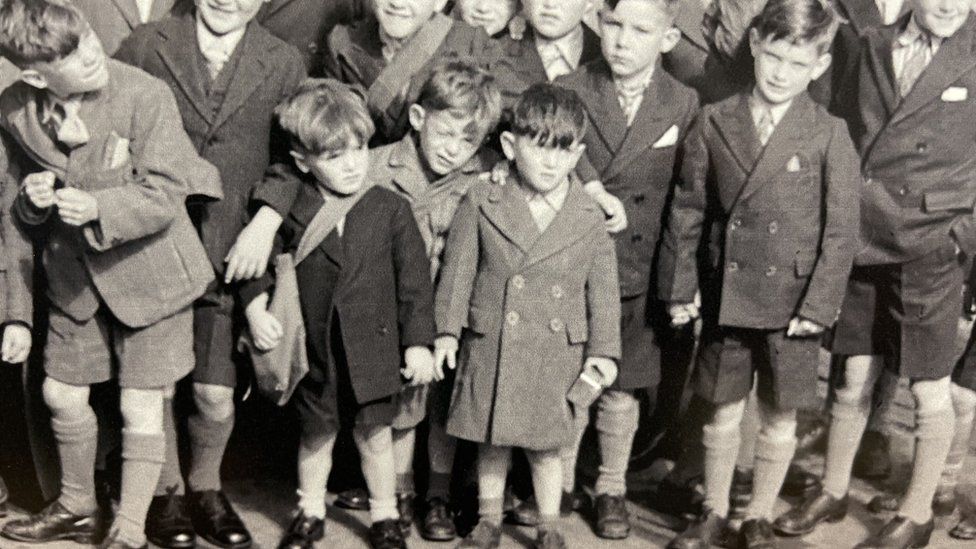 Michael (centre right) was sent to Australia at the age of seven. (COURTESY).

He learned that his mother had joined the services in the fight against Hitler.

During that time, she had entered into a relationship with a soldier from whom she became pregnant.

had put michael in the care of a catholic children’s homebut in a letter, found by the trust, he explicitly stated that he wanted to give his son a home when his father returned from the war.

“She wrote a very moving letter saying that when Michael’s father returned from the war, they would pick up his darling baby and they would take it home and be happy,” says Humphreys.

But when he went back to look for it, they told him that he had been sent to Australia. 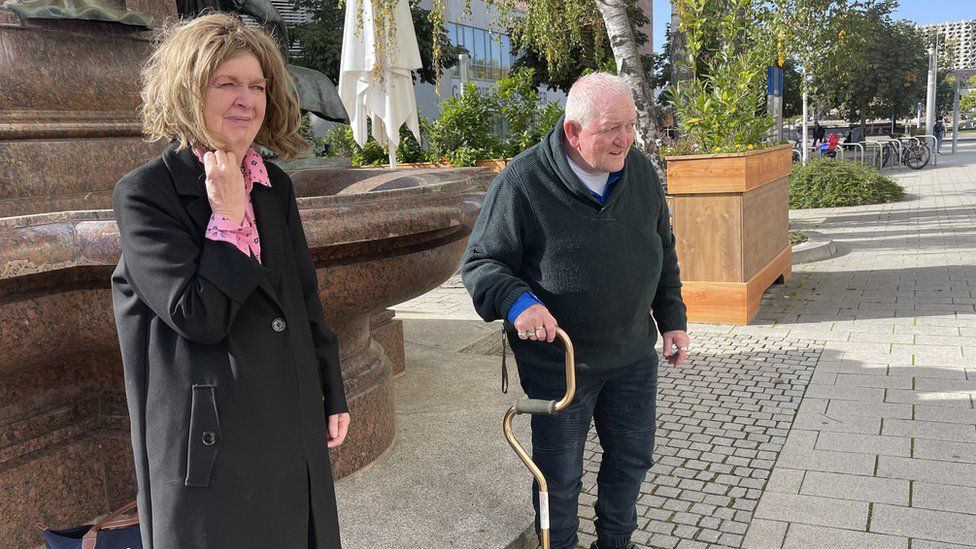 Michael traveled to Germany with Margaret Humphreys to find out more about her family.

Michael learned that his mother had followed him to Australia. but had never found it.

His name had been changed and he lived in Perth.

Ilse had died in Melbourne in 2009, a year before Michael turned to the trust for help.

However, the organization has been able to help Michael to explore his family history.

This month, he traveled with Margaret Humphreys to the German city of Chemnitz, where his mother fled from the Nazis more than eight decades ago.

“I just felt in my heart that it was important to come and touch the ground where my mother was,” she said. 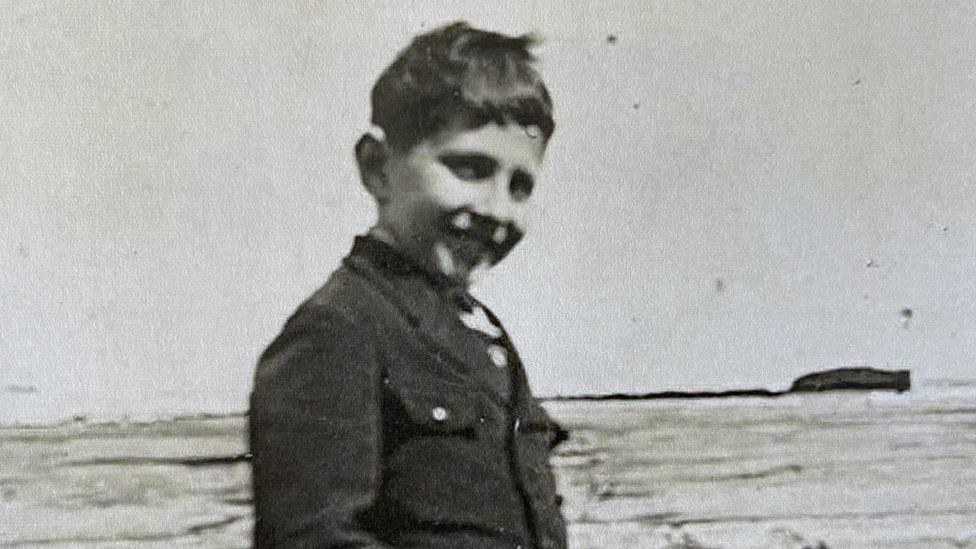 Michael’s uncle Werner, his mother’s brother, died during the Holocaust. Michael says that his uncle was “the spitting image” of him. (COURTESY).

there, Michael visited a monument in memory of his grandparents and his uncle on the site of his family’s former home.

Later he traveled to the Jewish cemetery in Chemnitz.

When he got there, the area was bathed in autumn colors and sunshine.

He looked at the graves on the side of the his grandmother’s family: the Franks.

“After all these years I can see where they are buried. It’s wonderful,” he said. 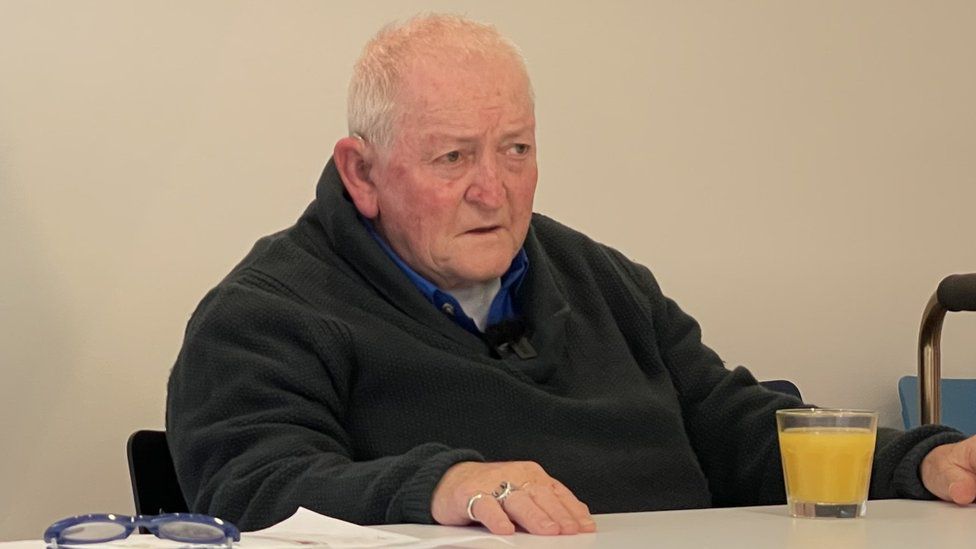 In Germany, Michael discovered that some of his biological relatives had survived the Holocaust and were living in New York.

“Welcome to the family”

The city authorities, who were organizing a commemorative project, invited Michael to see a film they had made in which members of his German family appeared.

For the first time, he was able to see the faces of relatives he never knew existed.

“You have been going around for 80 yearswithout knowing all these people and suddenly you see them,” he said.

“It’s such an important thing…a great experience and also very emotional. I got what I needed to be able to say ‘I know where I belong.'” 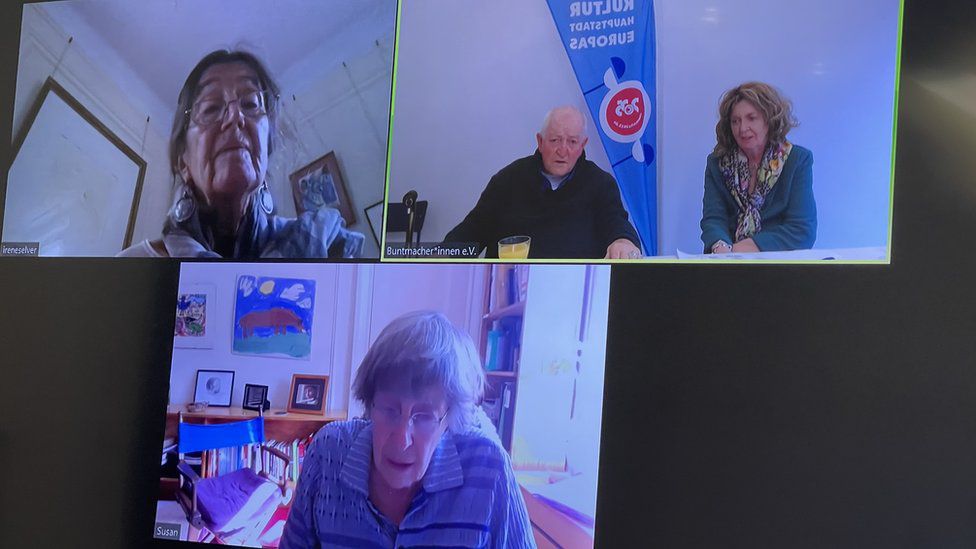 Thanks to a video call, Michael was able to see his living relatives for the first time.

Some of them, he learned from researchers in Chemnitz, had ended up living in New York.

Shortly after learning of this, the trust carried out your first online meeting.

They found an empty office building in the city with a giant television screen for Michael to see and talk to, for the first time, with his biological relatives: his family from New York.

found out that her great-aunt had also escaped of the Nazis. 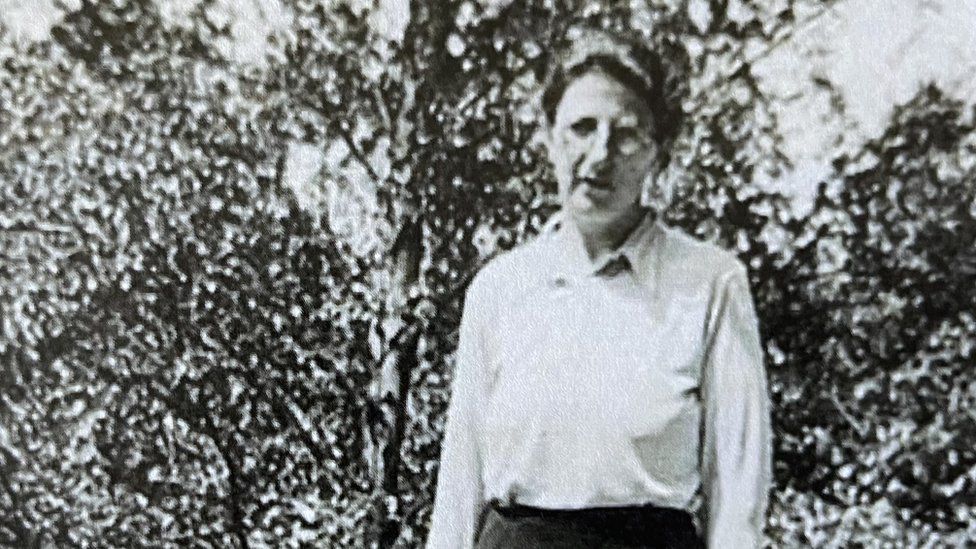 Michael’s grandmother died at the hands of the Nazis, but his sister – like his mother – escaped and emigrated. (COURTESY).

Although she was no longer alive, her daughters and other family members were all on the screen, waiting to greet him.

His voice cracked as he greeted and said, “Hello. How are you?”

“Welcome to the family”, they responded.

She now hopes to keep in touch with her family and potentially use the travel fund set up by the British government for migrant children and administered by the trust to join them one day in New York.

“I would love to meet my family,” he said.

“This is the greatest thing I’ve ever done, the gift I have now to be able to say ‘These are my roots, this is where I come from, this is where my family comes from and I can get to know more about them.'” 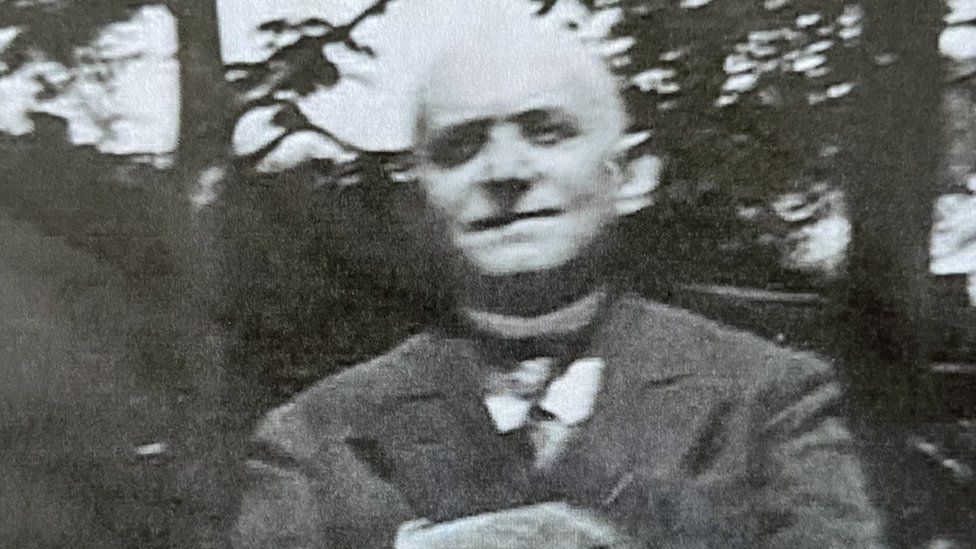 Michael said that he was very sad as he contemplated the loss of his biological family, including his grandfather. (COURTESY).

On his last day in Germany, he went to the Holocaust memorial near the Brandenburg Gate to remember the murdered family he never knew.

It is an imposing monument of flat stones.

Even on a warm and sunny day, the towering stones have a marked cold.

He had one more stop to make on his European trip. He went to Nottingham, home of the family of his late wife, who emigrated to Australia by choice.

It was also, by coincidence, the home of the charity that helped uncover his past and hopefully give it a new future. Michael says that his travels have left him a legacy.

He traveled to a small monument on the banks of the River Trent: a small plaque next to a tree.

It is dedicated to the 10,000 children who were separated from their families by the child migration scheme.

As he watched, Michael’s thoughts were with his family and his own children and grandchildren.

“They can have this legacy, my legacy,” he said.