kim jong un He starred in several missile launches in recent weeks, but the last one had something special, and it wasn’t because of the weapons he showed: it’s that he introduced one of his daughters, and thus introduced North Korea -and the world- to the fourth generation of the family that ruled the country for more than seven decades. It was a clear indication of his dynastic vision for Pyongyang, analysts said. Did we just meet her heiress?

The state media North Korea reported on Saturday that Kim had watched the launch of his new type of ICBM with his wife Ri Sol-Ju, his “dear daughter.” and other officials the day before.

LOOK: North Korea doubles down on its defiance of the world by launching an ICBM intercontinental missile that landed near Japan

Kim said the missile launch hwasong-17 -the longest-range nuclear-capable missile of North Korea– demonstrated that it has a reliable weapon to contain US military threats.

The main daily Rodong Sinmun, he also posted a series of photos of Kim smiling as he watched the missile from a distance with his daughter. Other photos of her showed her with her hair up, dressed in a white jacket and a pair of red shoes as she walked hand in hand with her father next to a huge missile on a launch truck.

It is the first time North Korean state media has mentioned the daughter or made her photos public. The Korean Central News Agency did not provide further details about her, such as her name and her age. 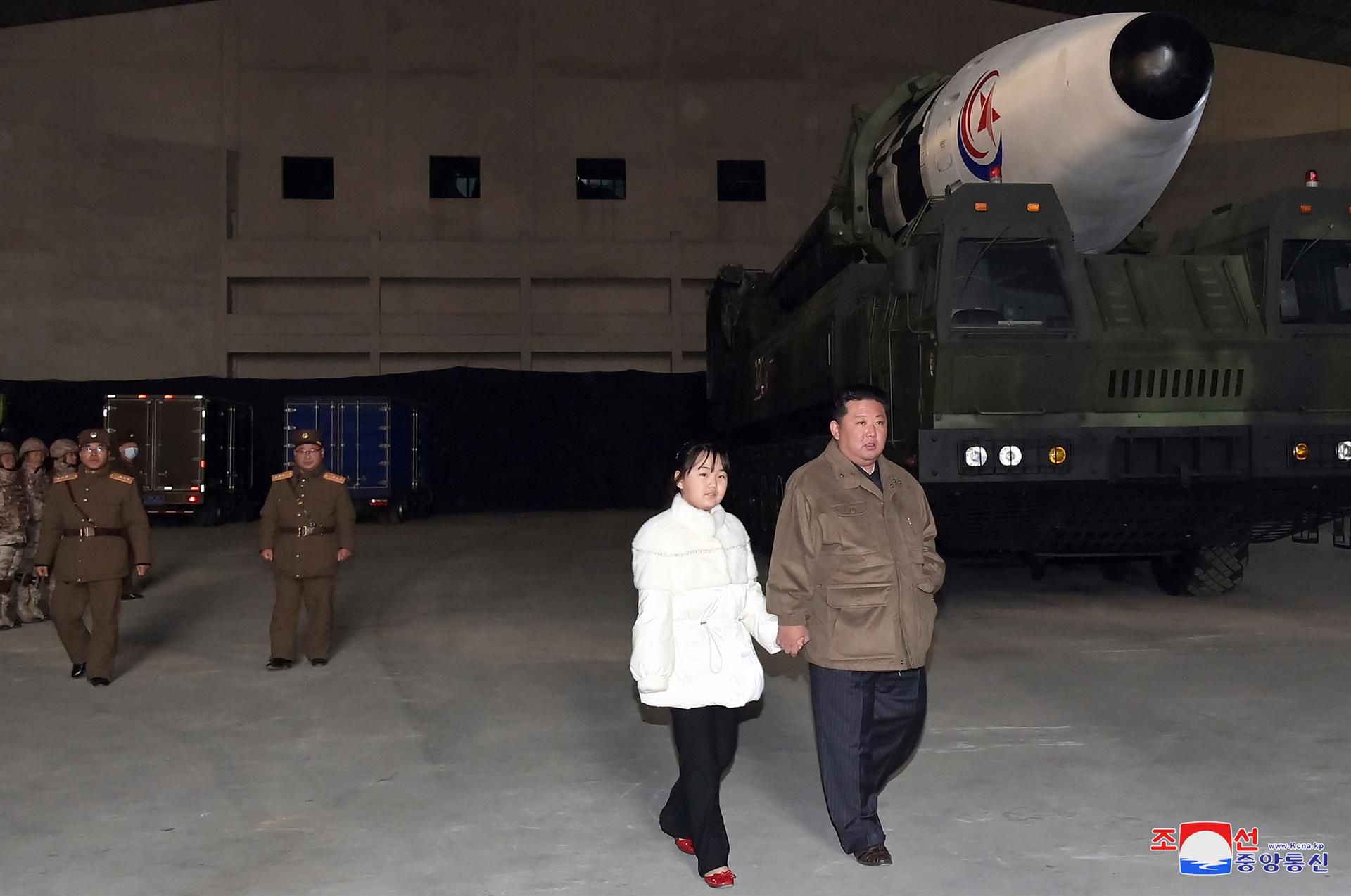 Kim Jong-un accompanied by his daughter during the launch of a new type of Hwasongpho-17 intercontinental ballistic missile (ICBM) at the Pyongyang international airport, November 18, 2022. (EFE).

Much of Kim’s private life remains unknown. But South Korean media reported that Kim married Ri Sol-ju, an ex-singer, in 2009, and that the couple have three children who were born in 2010, 2013 and 2017.

It was not known which of them was the girl who was at the launch. But in 2013, after a trip to Pyongyang, the retired NBA star Dennis Rodman told the British newspaper Guardian that he and Kim had a “relaxed time by the sea” with the ruler’s family and that he held Kim’s infant daughter, named Ju Ae. He added that the North Korean leader was “a good father”

The identity of Kim’s children is a source of interest abroad, as the 38-year-old ruler has not publicly designated an heir.

When he disappeared from public view for an extended period in 2020 amid unconfirmed rumors about his state of health, the world’s media went wild to find out who was next in command in an impoverished country. But with nuclear weapons. Many observers said then that Kim’s younger sister, Kim Yo Jong, he would run the country if his brother was incapacitated. Kim Jong-un and his wife, Ri Sol-ju, prepare medicine at an undisclosed location in North Korea on June 15, 2022.

“It is too early to infer anything about the succession within the Kim regime,” said Leif-Eric Easley, a professor at Seoul’s Ewha University. “However, publicly including his wife and his daughter in what Kim considers to be a historically successful missile test associates family business of running North Korea with nation’s missile programs”.

“This may be an attempt to make up for what little economic achievement Kim has to support his domestic legitimacy,” Easley said.

The girl who appears in the photos could be Ju Ae, possibly Kim’s second daughter, said Cheong Seong-chang of the Sejong Institute’s Center for North Korean Studies in South Korea. He commented that she is the equivalent of a North Korean “princess.”

Cheong considered that, with her identity revealed, she could possibly participate in state affairs and that her appearance with her father could indicate that she is his designated successor. 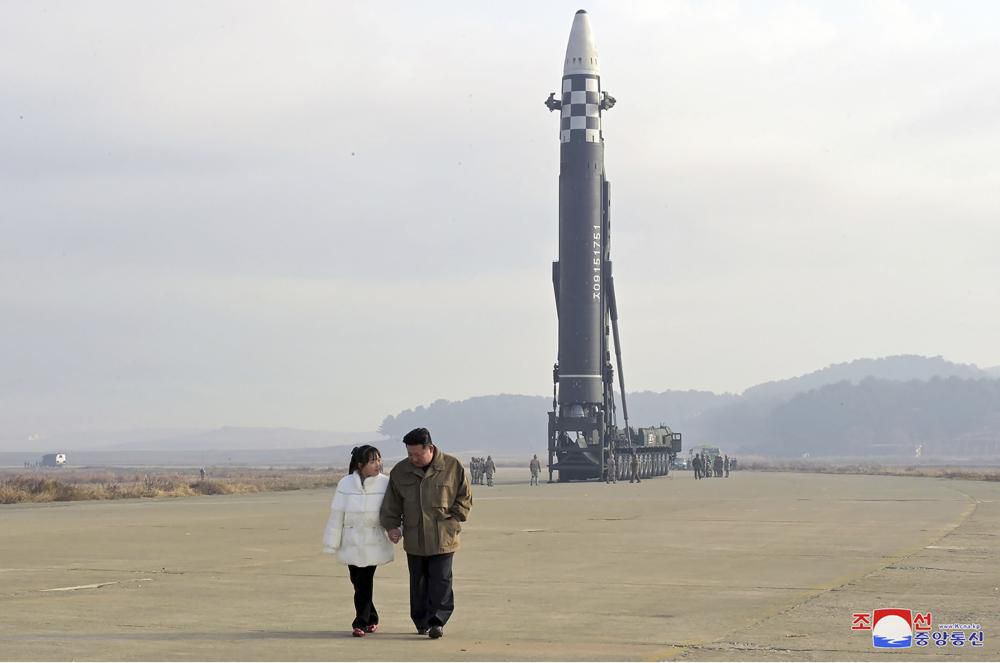 Kim Jong-un and his daughter walk with the intercontinental missile in the background. (AP).

“Under the North Korean system, Kim Jong-un’s children would have the status of prince or princess, like in a dynasty. like the newspaper Rodong Sinmnum posted the photo of the daughter, who looks so much like Kim Jong-un and Ri Sol-Ju…she has no choice but to live a special life,” Cheong said.

The revelation of the daughter of the Kim family has taken many observers by surprise and brought back memories of the moment when the current leader was appointed as his father’s successor.

It wasn’t until 2010 that Kim, then 26, was first publicly mentioned in the media. media outlets when he held a series of senior posts before inheriting power after his father’s death, Kim Jong Il, the next year.

Kim Jong-Il was also 31 when he won a key post in the Workers’ Party in 1973, an appointment seen as a key step on the road to succeeding his father Kim Il-Sung. Kim Jong-Il’s position as successor was made public at the party congress in 1980. The challenges of Kim Il-sung and Kim Jong-il, in North Korea.

But Cheong said that When Kim was 8 years old, in 1992, Kim Jong Il privately told his associates that Kim Jong-un, the third and youngest of his sons, would succeed him. His father chose him as his successor over his eldest sons because looked more like him added.

“Kim Jong-un might want to do the same with this daughter. Perhaps she has qualities that Kim finds similar to his.Cheong noted, adding that if she continues to accompany the father to important events, she could confirm that this is the case.

Other observers point out that the fact that Kim brought his family to the missile test site indicated that he was confident in the successful launch of the weapon, or that he may have tried to project an image of a normal leader who includes his family in his affairs. .

North Korea has fired numerous ballistic missiles this year, more than in any other year. Japan indicated that the intercontinental missile launched on Friday may have the ability to reach the continental United States. “Introducing Kim’s daughter at this juncture could be a signal to the world that the north korean regime is not going awaysaid analyst Soo Kim.

“In a certain way is a symbolic photo of Kim passing the scepter of command to the next generation”, he pointed out, which “sends a message to the international community to accept and welcome the fourth repetition of terror and belligerence”. He said the photos also suggest “a degree of closeness between Kim and her daughter,” a sign that she is being groomed for the wedding. future leadership.

The photos could also be part of a montage to try show Kim as a “normal” leader, said Ahn Chan-il, a North Korean studies scholar.

“It seems that Pyongyang is trying to present itself as a ‘normal’ country – while launching these intercontinental missiles that demonstrate its military might – by showing images of Kim as an apparently loving fatherAhn considered.

“It is also a gesture of stability for the regime by showing the world that it is heading for the fourth generation of succession and that it is ready for it.”

Include his wife in the public appearance and “especially his daughter, softens his image at least for the local publicJohn Delury, a North Korea specialist, wrote on Twitter.

Share
Facebook
Twitter
Pinterest
WhatsApp
Previous article
Qatar 2022: the incredible drone show that celebrated the start of the World Cup (VIDEO)
Next article
Ibarra did not want to miss Ecuador vs. Qatar: he wears an impressive bandage on his arm | VIDEO

The imposing corpse of Foch will soon lie at the bottom of the ocean. The Brazilian authorities decided...

This Thursday was not only bad news for PSG. Despite the fact that we learned about the alleged...

The imposing corpse of Foch will soon lie at...
World