Ukraine has announced the discovery of torture chambers in various buildings in the recently liberated city of Khersonthe largest territory that fell into the hands of Russian troops since the start of the invasion on February 24.

In addition, they begin to emerge testimonies of people telling how the Russians killed, tortured and kidnapped Ukrainians systematically.

In Khersonthe Ukrainian prosecutor’s office revealed on Monday the discovery of “torture sites” in “four buildings”.

In these buildings there are “provisional detention centers” from before the war, “where, during the takeover of the city, the occupants illegally detained people and brutally tortured them,” the prosecutor’s office said, according to the AFP agency.

LOOK: “I rescue the dead from oblivion”: the collectors of corpses in the war between Russia and Ukraine

Kherson It was the first major city to fall to the Russians after the invasion on February 24, but the Ukrainians recaptured it on November 11, in the latest major setback of Russian President Vladimir Putin’s offensive. 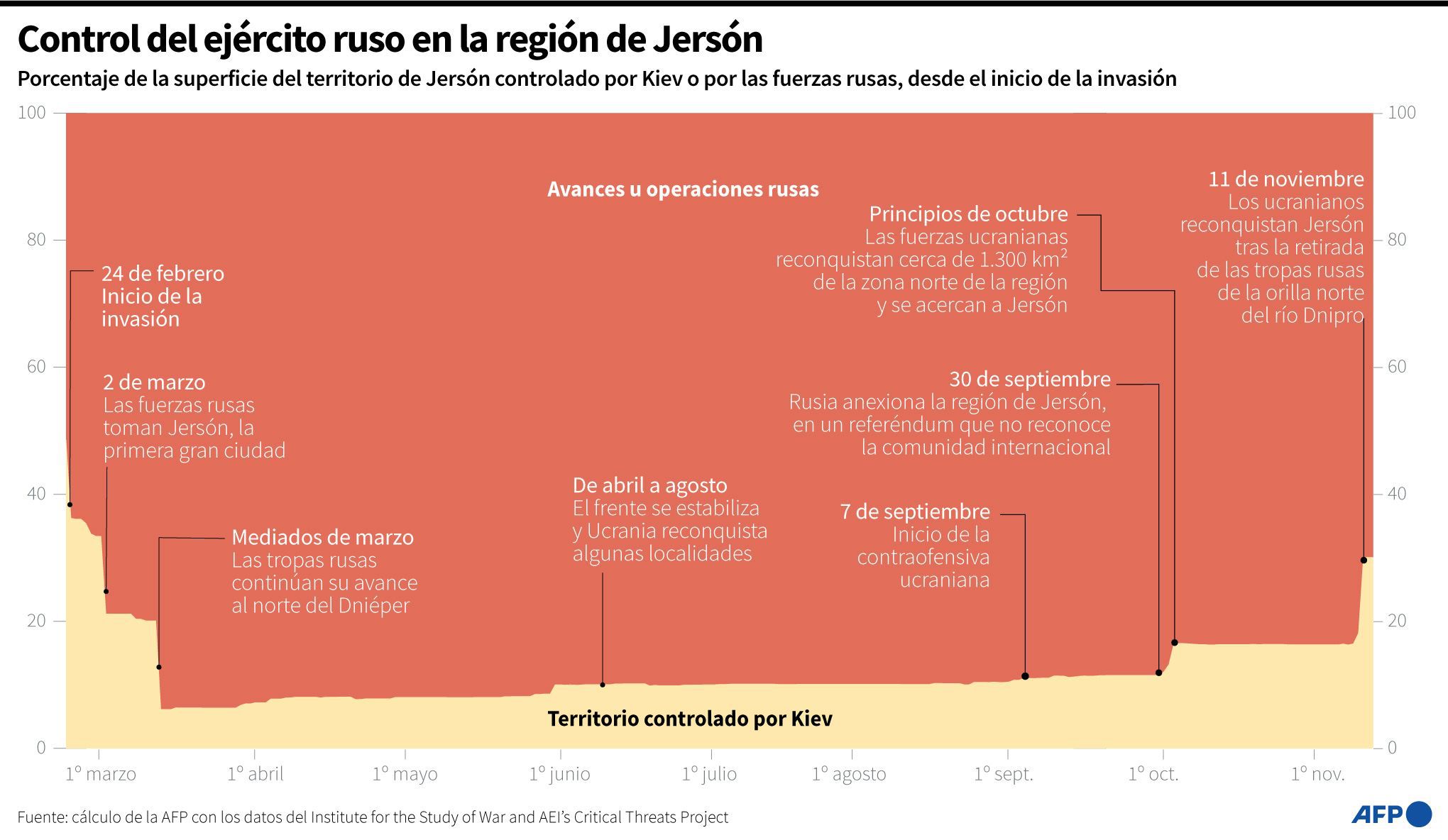 The capture and liberation of Kherson. (AFP).

In these sites designated as torture centers “pieces of rubber batons, a wooden bat, a device used by the occupiers to electrocute civilians” were seized, the Ukrainian prosecutor’s office said.

Last week, Ukraine’s ombudsman Dmytro Lubinets said that Russian troops were responsible for “horrible” torture in Kherson and accused them of detaining and murdering dozens of people, AFP reported. 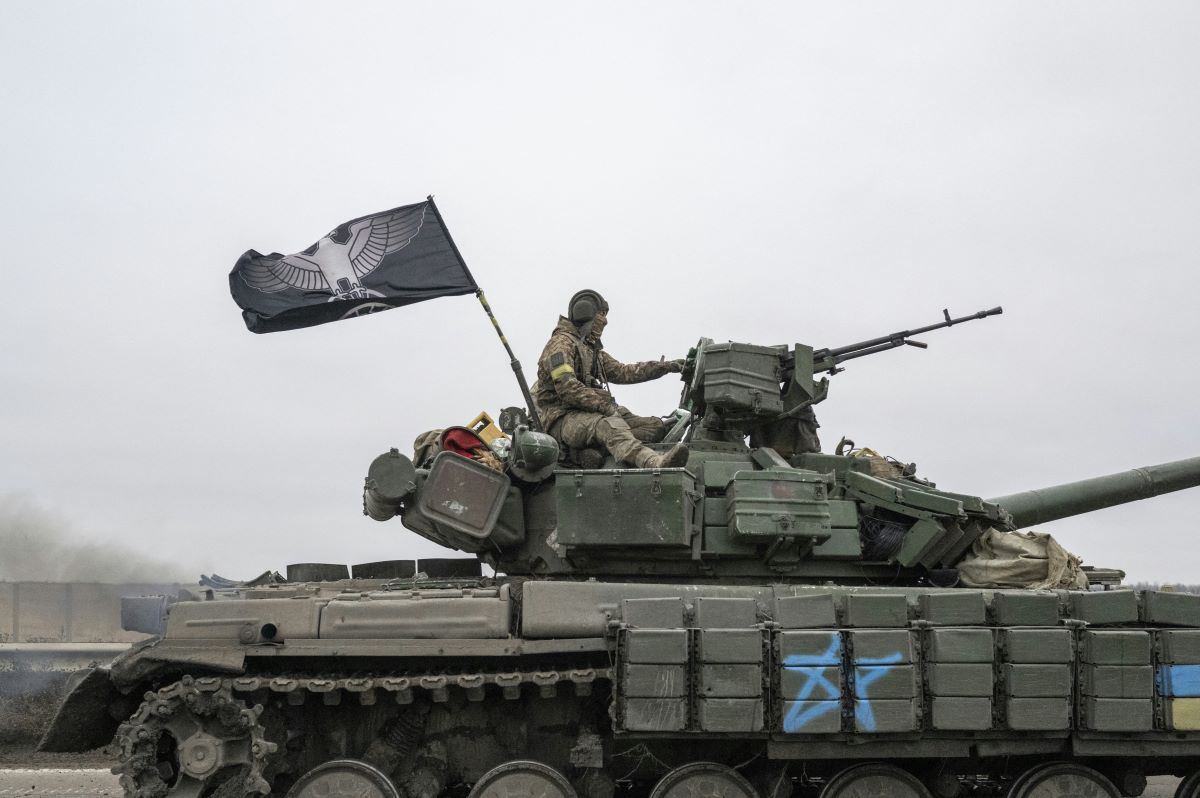 Anatoly Stozky told the AFP agency that he was arrested twice in Kherson. Interrogations to which he was subjected by the Russian and pro-Russian services included blows and electric shocks.

Anatoliy was part of a Ukrainian territorial defense force unit from the beginning of the Russian invasion on February 24.

On March 2 the Russians entered Kherson. “After two or three weeks, the Russians found the list of those of us who had been recruited into the territorial defense, and they began to arrest us.”he told AFP at his home.

“They came here. I was with my wife and 3 year old daughter. I gave them my gun because they were threatening to kill my family.”, he explained. Later they took him away, hoodedto what he believes was a nearby police station.

They put him in a cell and they “tied him to a chair”. “Three or four people questioned me. They beat me with a baton and put a pistol or rifle to my head. They hit me on both sides of the head, on the top and on the ears, so they didn’t leave marks,” he said.

The Russians questioned him about his weapon. “They asked me where I had gotten it, who had given it to me and why I had not delivered it.” 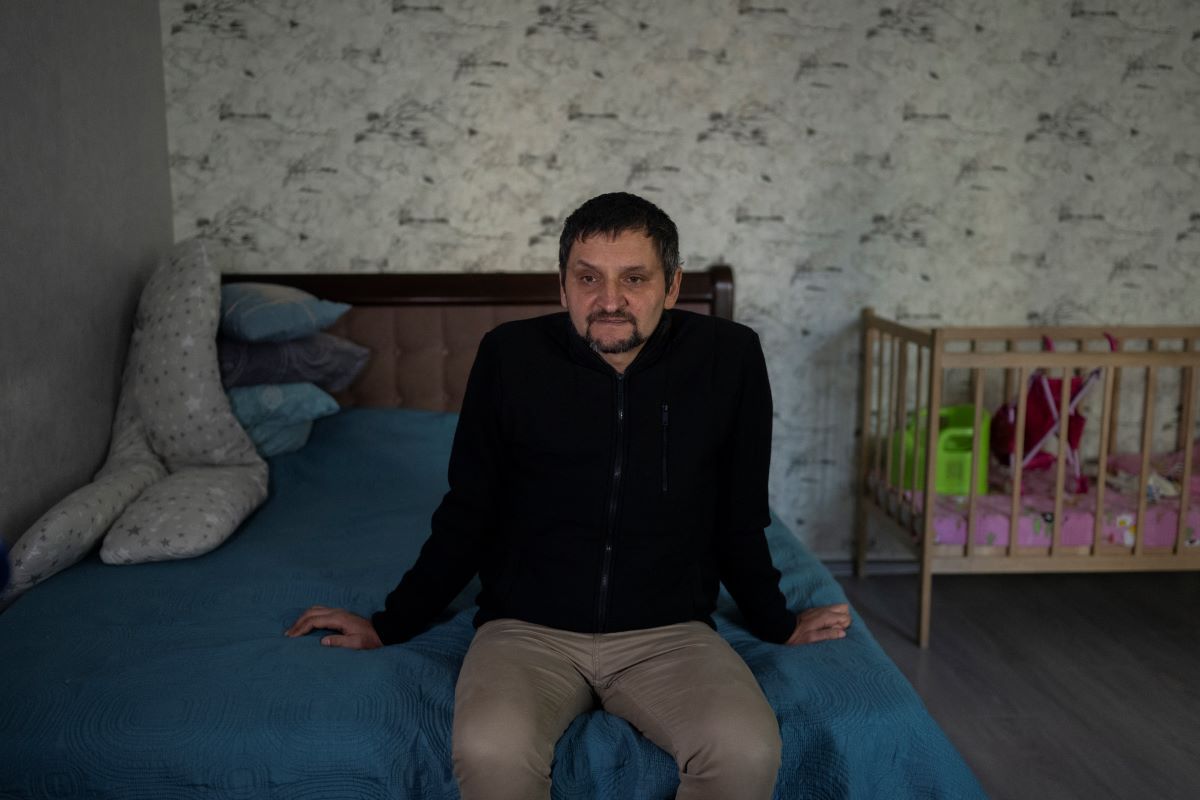 AFP explained that they took his passport, took his fingerprints and DNA samples and told him that he was now in a database, that he had to stay in the city and collaborate with the Russians.

They released him on May 4, in the street, with his head covered.

On July 6, he was arrested for the second time. They were men from the Ministry of Security of the Donetsk People’s Republic.

“They came to my house and told me: ‘we know that he has already been arrested, but the interrogation was incomplete. Now he will tell us who he knows and where there are arms depots.’”he explained.

“For the first 5 or 6 days they beat me. At night they did not let me sleep. Every two hours, they entered the cell and made me stand up and say my name.. I couldn’t lie down because I was sitting, handcuffed to a pipe“, he claimed.

Every time his jailers entered the cell, she had to put a bag over her head so she wouldn’t see them.

“They tied my hands and feet and threw me to the ground. They attached alligator clips to my fingers and electrocuted me.” said Anatoly.

He was rarely allowed to go to the bathroom. He urinated in empty bottles that were given to him in the cell.

“For the first two weeks I urinated blood. My kidneys were in bad shape. In the cells there were holes in the wall and I could communicate with other inmates. This allowed me not to lose my sanity.” added.

He was released on August 20, after a month and a half in detention.

“They broke my leg”

The CNN network interviewed Ukrainians who, on condition of anonymity, recounted the torture they were subjected to during the occupation of Kherson.

One of them is Oleksander (fictitious name), who narrated that Russian guards executed Ukrainian prisoners for their pro-Ukrainian chants or tattoos.

After the Russians withdrew from Khersonset fire to the torture center where Oleksander was “to destroy the evidence of his crimes,” says the witness.

Oleksander told CNN that fHe was detained by the Russian police in his apartment. They accused him of being a criminal. ensures that they deliberately broke his leg by kneeling over her while being held.

Add that In jail the Russians “mistreated everyone, they starved us, they used us as free labor to repair their military vehicles, they beat us however they wanted”.

Russia denies the accusations of war crimes and ensures that many of its detained soldiers have been victims of execution by Ukrainian troops. 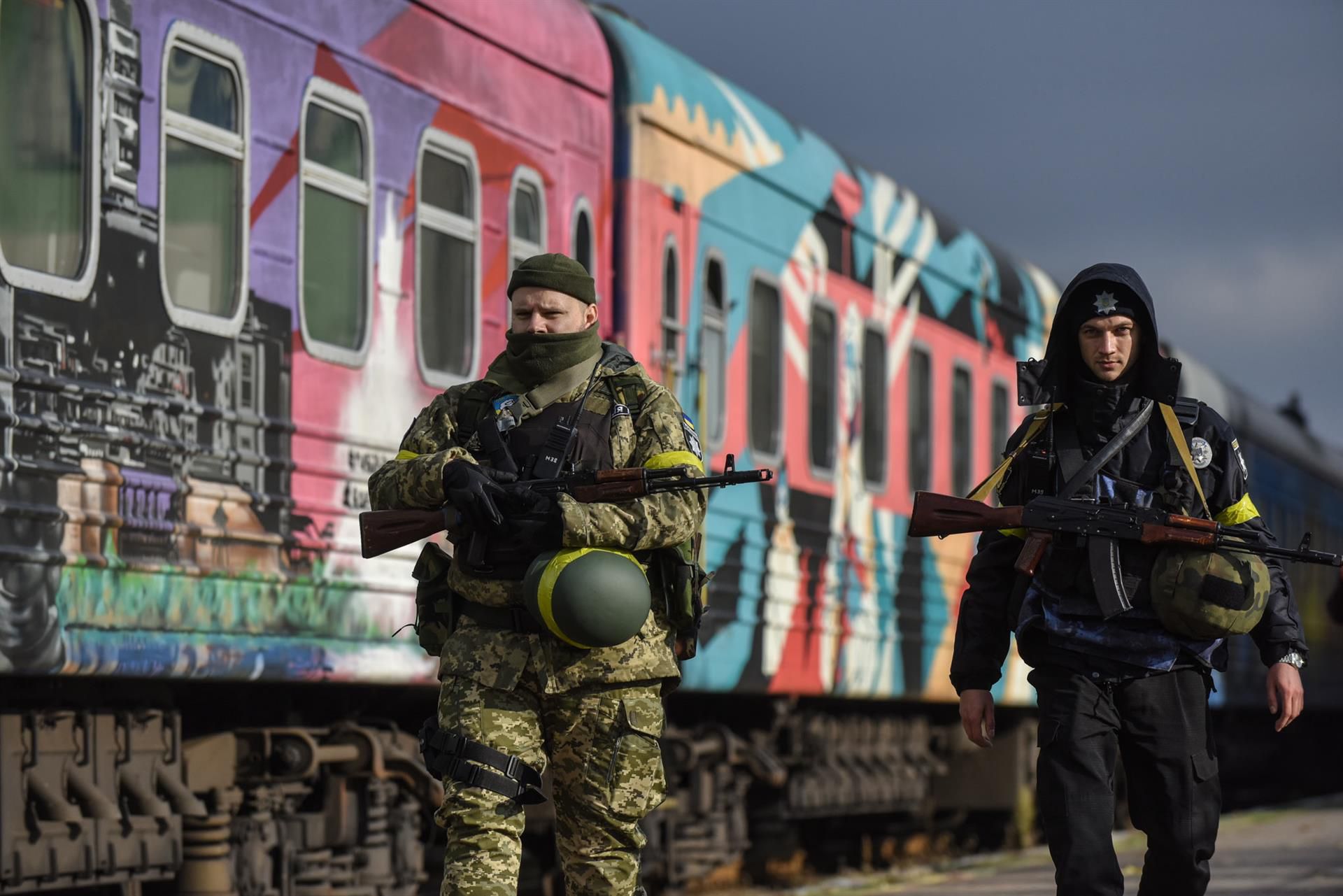 Two policemen patrol near a train at the Kherson railway station, in southern Ukraine, on November 19, 2022. (EFE/EPA/OLEG PETRASYUK).

“They simulated that they were executing me”

Another witness, identified as Kosta by CNN, said the Russians suspected him of being part of a clandestine network of saboteurs that targeted Russian officials and facilities under their control.

Kosta says that after Ukrainian underground activists blew up a Russian police vehicle near his department of Khersoneleven heavily armed Russians showed up at his door and They broke in to take him away.

ensures that his name was in a database run by the russians and that they knew the details of their mobile phones.

He was accused of having been a member of the “Right Sector”, an extreme right-wing nationalist organization with which he worked in the political and military arenas. He told CNN that he does not belong to said organization.

Even now at liberty, Kosta says it’s hard for him to adjust to his new life and that he fears that the Russian collaborators, who are still on the loose, might attack him.

Kosta detailed to CNN how his arrest was: “A guy came up to me with a gun, with a gun to my head and started asking me questions. Do you know what will happen to his wife? If you don’t tell us the truth? I said yes, I would tell everyone, he would start asking questions. They say no, that you will tell us without questions.

He adds that when they took him to a police station and put him in a cell, the psychological torture worsened. “There is nothing that can prepare you for it”He says. 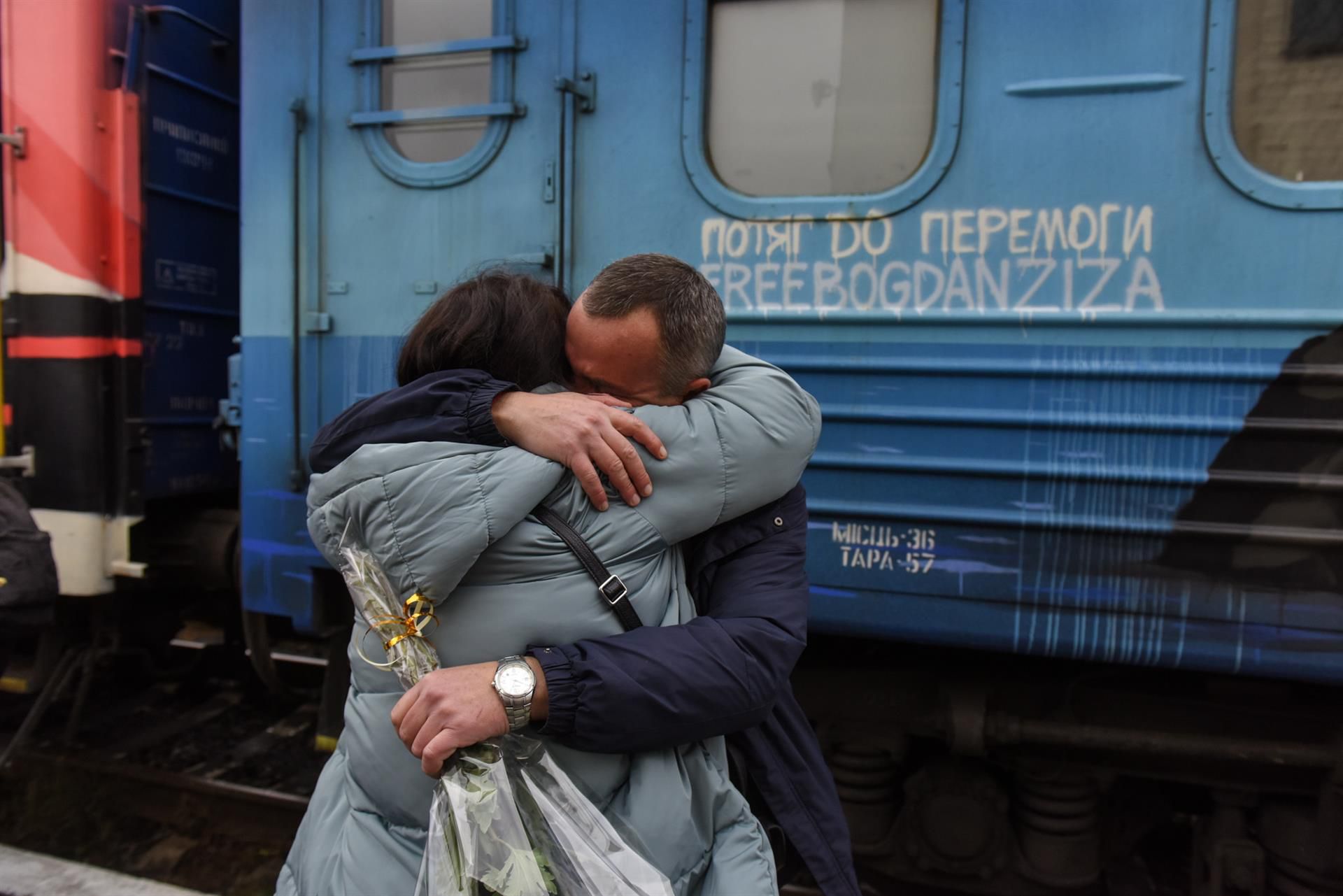 Andriy hugs his wife Olga as they meet again after three months at the Kherson train station, in southern Ukraine, on November 19, 2022. (EFE/EPA/OLEG PETRASYUK).

remember that again they put a gun to his head, told him to speak up —again no questions— and pulled the trigger. “I’m not sure my whole life flashed before my eyes, but it was really scary.” Explain.

After the mock execution, tells CNN, the Russians tried fake electrocutions. “They put electricity in my testicles… but they didn’t turn on the current.”

He said he had been prepared to break if the torture got too physical. “I understand that [con] real torture no one can bear.”

Remember also that in the cells located below yours I could hear people screaming and crying for their mothers as they were beaten to make them confess.

Kosta was eventually released because the Russians had no evidence against him. But he assures that he is still afraid due to what has already been mentioned, Russian collaborators remain hidden in Kherson.

VitalAfter a draw with Reims, PSG are due to resume play against Montpellier this Wednesday on the occasion of...

Was there a genocide of Yanomami indigenous people by...