The Gustavo Petro The president is different from the senator or mayor Gustavo Petro: the politician who has stood out for 30 years for his vehemence and confrontation with the traditional powers is obsessively betting on dialogue and consensus.

“I want a strong, fair and united Colombia,” he said at his inauguration. “The challenges that we face as a nation require a stage of unity and basic consensus.”

LOOK: Colombia and the ELN hopefully head into a dialogue that seeks changes

Among those challenges is, of course, violence. And to put an end to it, Petro has approached, against all odds, the most extreme right.

The Petro candidate knew how to represent the demands of millions of poor Colombians who were postponed by what is called in Colombia the “establishment”: the fight against inequality, clientelism and violence.

But in order to address them, and in order for them to be successfully resolved, the Petro president needs that political, media and business class that controls the country.

That is why the consensus methodology permeates his entire government: the cabinet has people of almost all tendencies and in the legislative coalition there are conservative and traditional parties.

The day after his election, Petro met with old enemies: his second-round challenger, Rodolfo Hernández, and the leader of the right, former president Álvaro Uribe. Photos were taken that seemed unthinkable before.

They predicted weak governance, but the pro-government bench has managed to pass important laws to take care of the environment, dialogue with criminals and raise taxes on companies and the rich.

It has also launched massive “binding regional dialogues” that convene communities in search of infrastructure, public order and transparency solutions.

Many, however, see it as a strategy: they accuse him of using old-time political tactics, the so-called “jam” clientele, although his allies justify it by saying that “the reforms, in order to be useful, need consensus among adversaries.”

In any case, the politician who was described as “arrogant”, “stubborn” and “despot” gave him the brotherhood when he became president.

And for two of his most ambitious promises, agrarian reform and peace with the National Liberation Army (ELN), Petro called businessman, rancher leader and politician José Félix Lafaurie.

Lafaurie accepted the invitation: he will be one of the government’s negotiators in the peace process with the ELN, which began this week in Caracas, and signed a crucial and generous agreement so that the State buys 3 million hectares of land from ranchers who hope to be distributed among peasants.

For 40 years, Lafaurie has made politics against everything that Petro represents: peace talks, land redistribution and State assistance.

If Petro in the past said that the ranchers were “narco landowners who violently expropriated peasants”, Lafaurie said that Petro was a “Nazi”, “adviser to Chávez” and “terrorist”.

Now the tone is different.

“Petro has shown that his administration will be one of dialogue and agreement,” Lafaurie justified these days. “He has opened scenarios… those of us who are on the other shore, what we have to do is go to those spaces and build in the direction that they propose, but also of course under the criteria that one believes that he should contribute.” 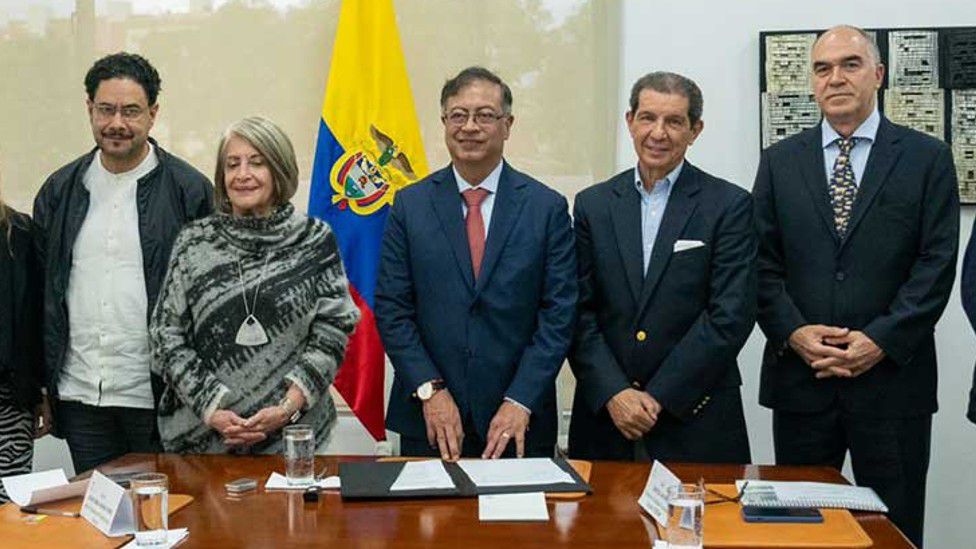 On the left is Iván Cepeda, a leftist architect of the rapprochement between Lafaurie and Petro. He is followed by Cecilia López, the minister in charge of agrarian reform. (PRESS PRESIDENCY OF COLOMBIA).

Uribe, an old friend of the rancher, welcomed the initiative: “Your participation can contribute to bringing an acceptable level of national agreement on the issue closer, which requires reflection and acts of peace from the ELN.”

During the peace process with the Revolutionary Armed Forces of Colombia (FARC), between 2012 and 2016, the implacable opposition of Uribismo generated skepticism among millions of Colombians, who mostly voted against the agreement in a plebiscite.

“In the case of the FARC, the national agreement was denied to us when we requested it as a result of the victory of the no in the plebiscite,” said Uribe. “There was no peace, but there was more drug trafficking, more violence and more political polarization.”

Petro, somehow, agrees, and hopes that Lafaurie’s adhesion to the negotiating table will give legitimacy to the agreement that is signed with the ELN. 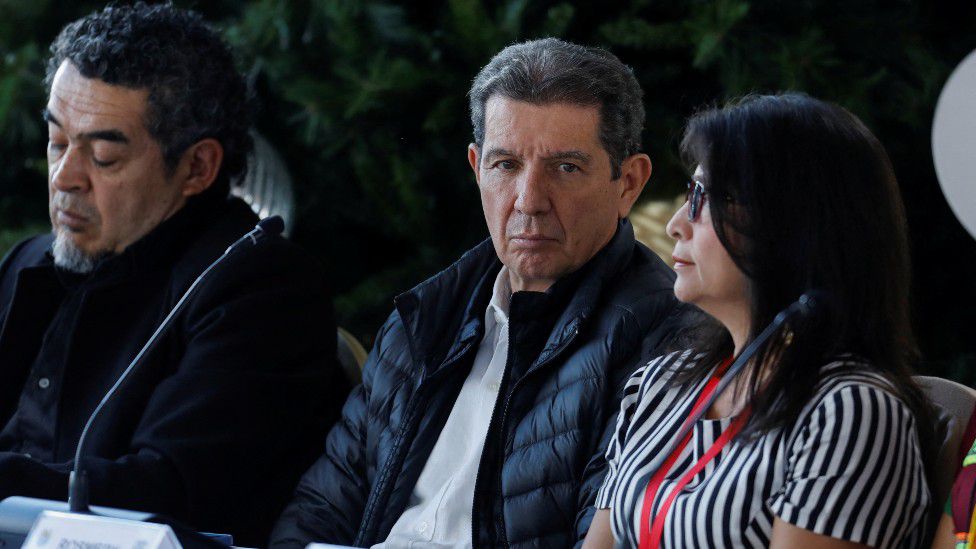 Lafaurie in Caracas, during the start of the peace talks with the ELN sponsored by Maduro. (REUTERS).

There are reactions to the arrival of Lafaurie to the negotiating group for all tastes: “A stone in the shoe”, “bold gesture” and “complex but interesting” were some of the comments from experts. Former FARC leader Rodrigo Londoño described it as a “sign that peace is unstoppable, wins wills and transforms the country.”

No one, in any case, can ignore the surprise, because the ranchers are the great enemies of the guerrillas. The promoters, according to judicial records, of paramilitarism; the owners, according to study centers, of a third of the land in the country; the architects, for many, of the inequality in property that originated the armed conflict.

Lafaurie was born into a family of cotton farmers in the north of the country. From a young age he was between businessman and politician. He went through several state fiscal control organizations and those linked to agriculture. He was union leader of the powerful notaries.

He is also the founder of one of the wealthiest clubs in Bogotá, the walnutemblematic for a guerrilla attack in 2003.

18 years ago, Lafaurie became president of Fedegán, a ranchers’ association that manages more than US$24 million in public resources, according to what La Silla Vacía reported, in one of the largest parafiscal collection funds in the country.

He is married to María Fernanda Cabal, an Uribista senator who rejects peace talks, is against all of Petro’s initiatives, supports carrying arms and opposes abortion. Cabal said she did not feel “comfortable” with the collaboration of her husband with Petro: “I firmly believe that crime should be subdued,” she said. And he defined the role of his partner in the peace talks as “observer.” 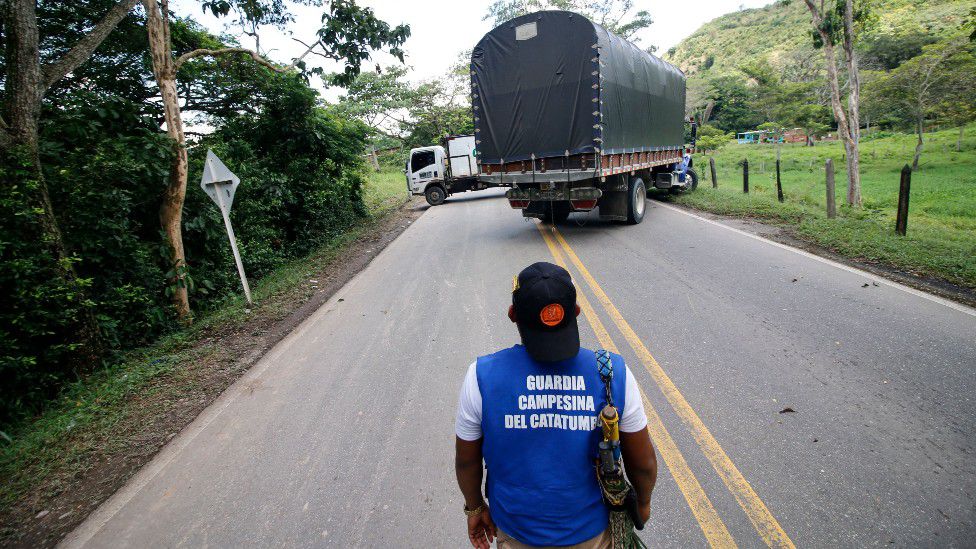 The great enemies of the right are the peasants, those that the ELN claims to represent. (GETTY IMAGES).

In 2004, Lafaurie was sanctioned for influence peddling by the Superintendence of Notaries and Registry, a decision ratified by several courts despite his appeals; and in 2008 he was named in court as one of Uribe’s allies who lobbied and bribed congressmen to approve his re-election.

The great suspicion about him, however, It has been an alleged link with paramilitaries, the anti-subversive armed groups that originated to defend large land holdings. Several former leaders of the self-defense groups testified in court that he was a key ally in politics; that he even recommended ways to evict the peasants.

He denies the accusations, although he admitted to having negotiated with them in search of peace. “The cattle union has the courage to assume the responsibility for having financed the paramilitary movement in the past,” he said in 2006. He always gave a justification, which he has even maintained in recent scenarios of land invasions: self-defense of private property .

Now, however, it looks like one more ally of the so-called “total peace” of Petro. “The livestock sector cannot refuse a request like the one made by the president with great generosity“He said. “Hopefully this yearning for total peace can come true.”

Many view it with skepticism. The government is just beginning and the honeymoon continues. Lafaurie may well leave the negotiating table when she sees fit. The polarization is reactivated in a flash and in 2023 there are municipal elections.

But these days, at least, half of Colombia is surprised by this brotherhood between old enemies.

Goals for France vs. Denmark today for the World Cup | VIDEO

In this note look at all the goals of the match between France vs. Denmark by date 2...

DIRECT. Argentina-Mexico: the hour of last chance has come for Messi and his family

16thFavorable counterattack for Lozano, who blew up the Mexican game, but he is waited behind and loses the ball.14thOn...

The Unesco will allocate more than 96,000 dollars to evaluate the damage of the fire that affected the National...

Irene Cara, singer and actress who won an Oscar for her role in “Flashdance”, died at the age of 63

the new yorker Irene CaraAmerican singer who achieved international fame by winning an Oscar for the song "What a...

France-Denmark (2-1): Ousmane Dembele kept his promise to the Blues

There will always be details that you can find fault with. But they will need solid arguments to...

The volcano chaparrastiquelocated east of The Savior and which erupted in December 2013, continues to expel gases and...

The Unesco will allocate more than 96,000 dollars to...
World

The volcano chaparrastiquelocated east of The Savior and...
World

Ukraine: there will be a third prisoner exchange with Russia in a week

The Government ukrainian reported this Saturday the release of...
World

USA: The story of the woman who gave birth in a McDonald’s bathroom

In this note we will talk about Alandria Worthy,...

Goals for France vs. Denmark today for the World Cup | VIDEO

DIRECT. Argentina-Mexico: the hour of last chance has come for Messi and his family