Doha Bay at sunset is one of the favorite meeting points for the multiple cultures that coexist in this month of the World Cup in Qatar.

When the thermometers relax 30°C in the Qatari “winter”, families, fans and the curious come together walking along the Al Corniche avenue that combs seven kilometers of the capital’s seafront.

It is here where the contrast between Western visitors and several local Qatari families, who observe with some astonishment what is being set up in their country, is best appreciated.

There are no more than 350,000 Qataris in this Muslim state of three million inhabitants, and among them there is a whole spectrum of interpretation of Islamic principles.

There are conservative and traditional families, but also progressive and liberal ones.

The role of women is at the center of this reality with more gray than white or black.

Along the Corniche, some walk completely covered in black and others simply wear a colored hijab (veil only for the head and neck).

But the issues that affect them go far beyond their outfit.

In Qatar there is a system known as male guardianship of women that those who oppose describe it as “being like a minor all your life”. This system is the basis of many claims to obtain better rights.

In the UK, the BBC spoke with “Zainab”, a Qatari who prefers not to reveal her name despite already living outside her country.

Zainab says that certain conservative religious elements within Qatari law impacted her mental health to the point of contemplating suicide.

“For every big decision in life, you need the explicit written permission of a male guardian. If you don’t get it, you can’t make that decision, whether it’s enrolling in college, studying abroad, traveling, getting married or getting divorced,” he says.

Women watch the fireworks for the opening of the World Cup in Doha.

Nevertheless, Not all families follow this complex system to the letter.

Qatari Shaima Sheriff is co-founder of Embrace Doha, a cultural association whose purpose is to help the large expatriate community and growing number of tourists better understand the country’s culture.

Sheriff tells BBC Mundo that the application of guardianship does not respond to a law in itself, but rather resides in family norms that depend on how conservative the family is. Sheriff represents another side of the coin, the liberal Qatari environment where women are empowered.

What then does the guardianship system consist of?

Eleni Polymenopoulou, a professor of law and human rights at Doha’s Bin Khalifa University, explains to BBC Mundo that the Qatari Constitution, being a Muslim country, has Islamic or sharia law as the main source of law.

“But sharia is a very diverse body of rules, with many schools of thought, some stricter and some more liberal, modern and reformist,” he says.

In the Qatari Constitution it indicates in its article 35 that all persons are equal before the law and that they cannot be discriminated against based on sex, race, language or religion.

In 2019, the organization Human Rights Watch (HRW) published an extensive report where it collected dozens of testimonies similar to those of Zainab.

In the same document, he describes that male guardianship is not a clear legal system.

“It is rather a mixture of laws, policies and practices in which adult women must obtain permission from their male guardian for specific activities,” says the NGO.

This system is a challenge for those who suffer it because there is no clarity or information about the scope of “these discriminatory laws and administrative requirements.”

The male guardian can be a father, brother, uncle, godfather or husband. 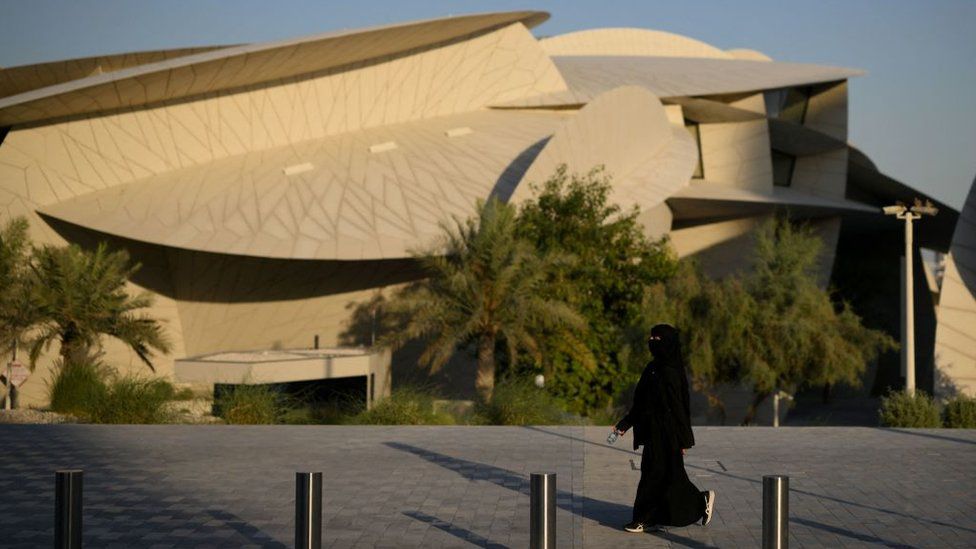 Some women in Qatar are fully covered, others cover their hair. (GETTY IMAGES)

The Qatari government branded the HRW report as vague and said that the testimonies described were not aligned with its laws, but also promised to investigate the cases and prosecute those who break the law.

As a teacher to several Qatari law students, Polymenopoulou says that “many women from liberal families are allowed to do many more things, but then there are others who need the guardian’s permission to go out, for example, and that is one of the biggest problems. It really depends on the family“.

“Many of my students always discuss how to change the law, they question why it works that way, why they are censored and what should be reformed. Others are more conservative,” she adds.

BBC Mundo requested to interview some of the Polymenopoulou students, but they did not get in touch. Interviewing local Qataris is being one of the challenges of the press that has come to cover the World Cup.

Having a conservative father meant that Zainab did not lead the life she wanted.

She says that those Qatari women whose liberal families do not restrict them do not realize how harmful the guardianship system is.

Zainab says this system causes women to suffer at the hands of controlling family members and Qatari laws often align with conservative tribal families to keep them satisfied.

“Conservatives believe that a woman’s rights is a Western idea and that it clashes with Islamic values, tradition and culture,” she says.

The Qatari asked the BBC not to detail her experience in case she was identified because it could imply difficulties for her family. 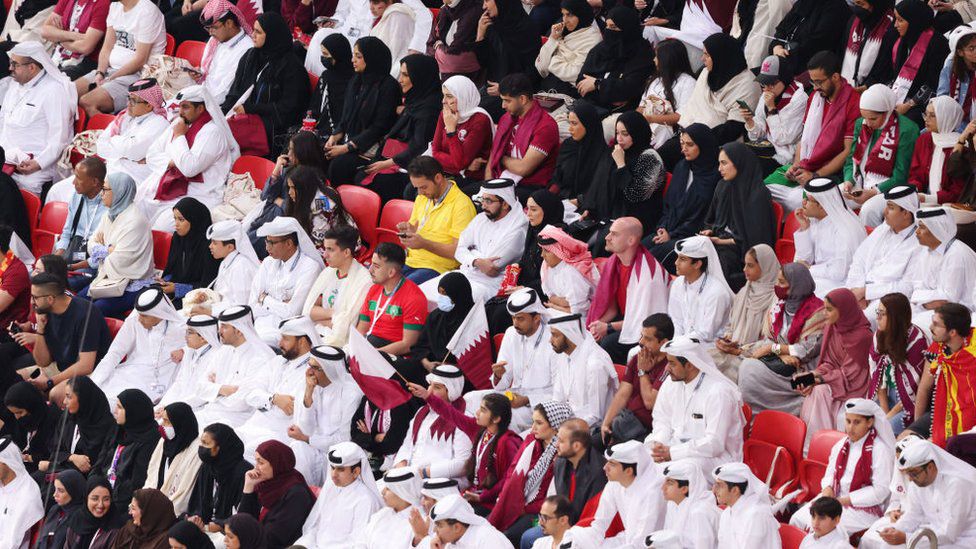 In Qatar, unlike other Muslim nations, women have been able to access stadiums. (GETTY IMAGES)

World Cup officials say the criticism their country receives on this and other issues is not well founded.

A vision shared by student Moselle, from the Education City in Doha: “We don’t need them to come western organizations to tell us what we can and can’t do.

“It is our country. We have the opportunity to develop in the way we believe and not in the way that is dictated to us,” he adds.

The view that there are conservative women who abide by and believe in these norms that Westerners see as restrictive is also other side of this reality.

A Colombian woman who has lived in the country for more than a decade tells BBC Mundo about situations in which conservative Qatari women have called her attention or have restricted her access to certain places because they considered that her clothing was not appropriate.

“The authorities usually take their side. The conservatives see it as an offense against their values,” says the Colombian, asking for confidentiality: “As residents we shouldn’t talk about it much.”

When the Qatari government responded to the HRW report, it said “female empowerment is central to its vision and success.”

“In Qatar, women occupy prominent roles in all aspects of life, including political and economic decision-making. Qatar leads the region in almost all gender equality indicatorsincluding the highest rate of female labor participation, equal pay in the government sector, and the highest percentage of women enrolled in university programs.”

It’s the kind of achievement that Shaima Sheriff, who represents a more empowered female constituency, prefers to focus on.

“I think a lot of people have misconceptions that change when they get here. The statistics on women speak for themselves. There are many women with master’s degrees and doctorates even at Ivy League universities,” she told BBC Mundo.

“There are incredibly intelligent women here and a lot has changed in the last five years. A lot is being done in Qatar to reduce the gender gap and support women more. We also get a lot of support for being mothers, something that doesn’t always happen in Western countries,” she continues.

The entrepreneur, an archeology graduate, asks the foreign press and the outside world to also look at this kind of thing when talking about women’s rights and freedoms in Qatar.

“Of course, everything here is not perfect and we have many things to improve. but youwe have many empowered women in leadership positions who are putting these issues on the table”, he concludes.

Share
Facebook
Twitter
Pinterest
WhatsApp
Previous article
Courtois and two goals that he saw pass through his hands to the disgrace of Belgium
Next article
Sabiri’s goal for Morocco: he scored 1-0 over Belgium after surprising Courtois | VIDEO

In this very dark period, Milan, having suffered a major defeat in the last three games, hail the return...