Jill Biden adorns the White House with more than 70 fir trees and 83,000 lights

The first lady of the United States, Jill Biden, inaugurated this Monday the decoration of the White House for this Christmas, which has the motto “We the People” (“We, the people”, in Spanish) and has adorned the presidential building with 77 fir trees and more than 83,000 lights.

Different rooms were dressed for the occasion with a decoration in which 150 volunteers worked for a week and which aims to “capture the spirit embodied in the very idea of ​​the United States.”

Look: Teenager Payton Gendron pleads guilty to racist massacre in the US and will never get out of jail

From bells to cardboard animals, through artificial snow and a gingerbread replica of the White House itself, the presidential building kicked off the Christmas season with its traditional annual decoration.

Christmas decorations on the theme ‘We the People’ are unveiled during a press tour ahead of US President Joe Biden and First Lady Jill Biden’s Christmas receptions at the White House in Washington. (REUTERS/Jonathan Ernst/)

Jill Biden he chose “We the People” as a motto alluding to the preamble of the US Constitution, which begins in the same way.

The first lady wanted to dedicate this edition especially to the families of the National Guard of the United States for “give support” to those who “represent the heart” of the communities, so he invited members and family members to welcome the parties. 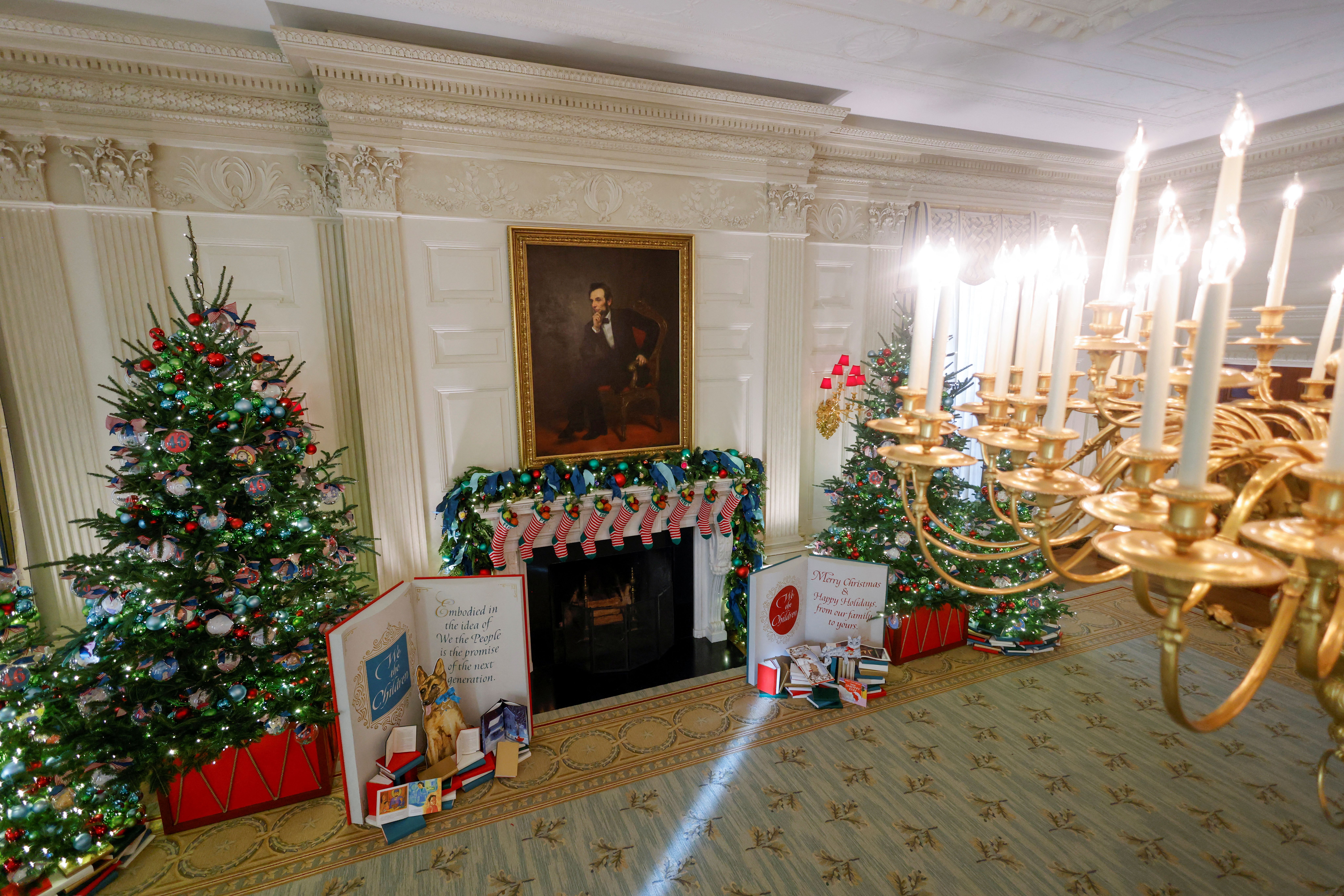 Biden family stockings hang on the mantelpiece amid “We the People”-themed Christmas decorations in the State Dining Room. (REUTERS/Jonathan Ernst/)

“You have to recognize their service and let them know that they are not alone”claimed the wife of Joe Biden, who as the mother and grandmother of members of the National Guard influenced the work of those forces, which “it often goes unnoticed.”

Among the decorations, there was no lack of the traditional gingerbread house made by Americans, in which more than 13 kilograms of chocolate and 18 of royal icing have been invested. 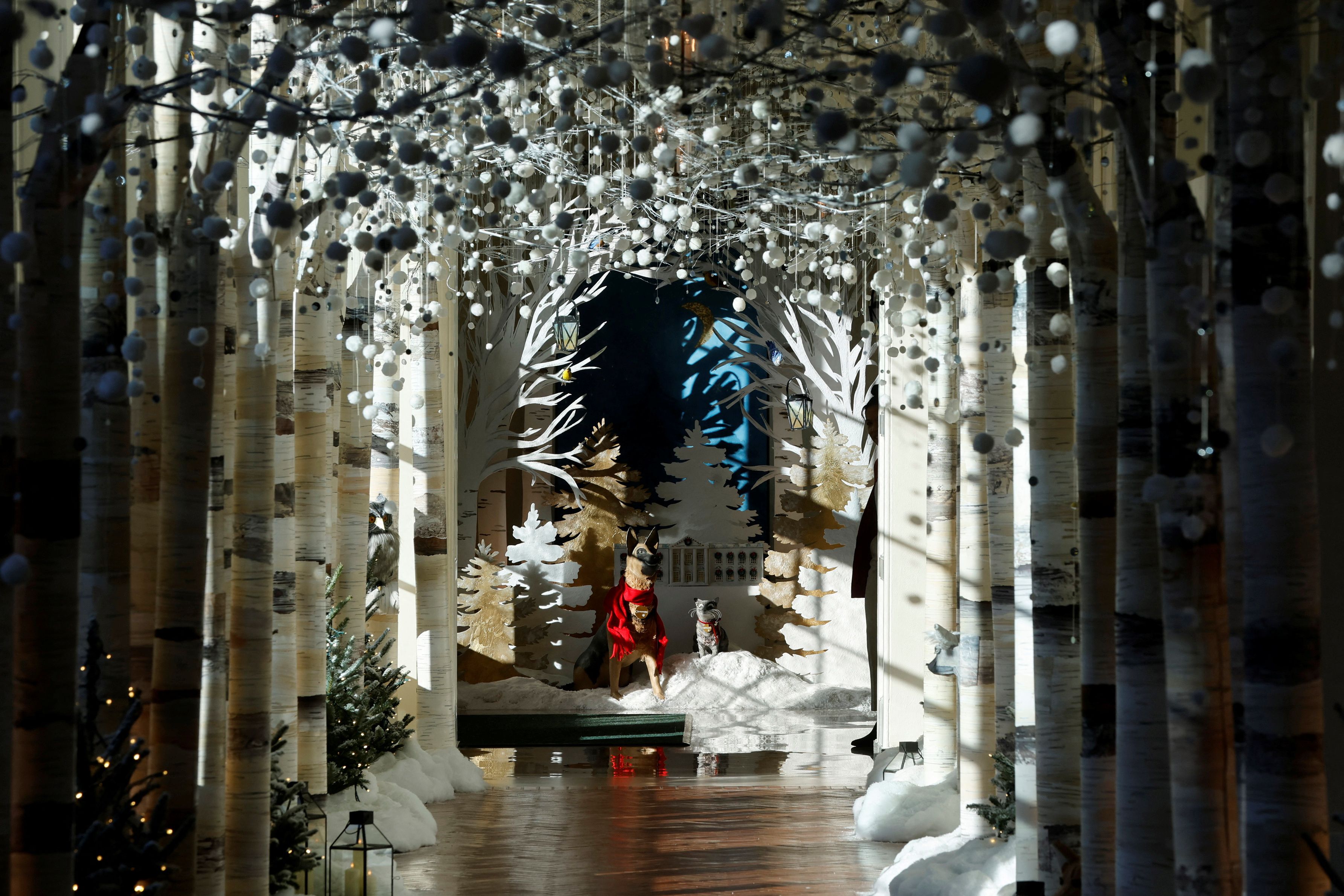 Trees meant to portray a first snowfall in the woods line the eastern colonnade as “We the People”-themed Christmas decorations are unveiled. (REUTERS/Jonathan Ernst/)

Following this year’s theme, a cookie replica of Philadelphia’s Independence Hall also dominates the dining room, renamed “We the Children” and dedicated to the little protagonists of the festivities.

The first lady encouraged “see Christmas through the eyes of children” and he especially referred to the children of members of the National Guard, with whom he spoke in the morning to learn their stories and learn “how to give them better support”. 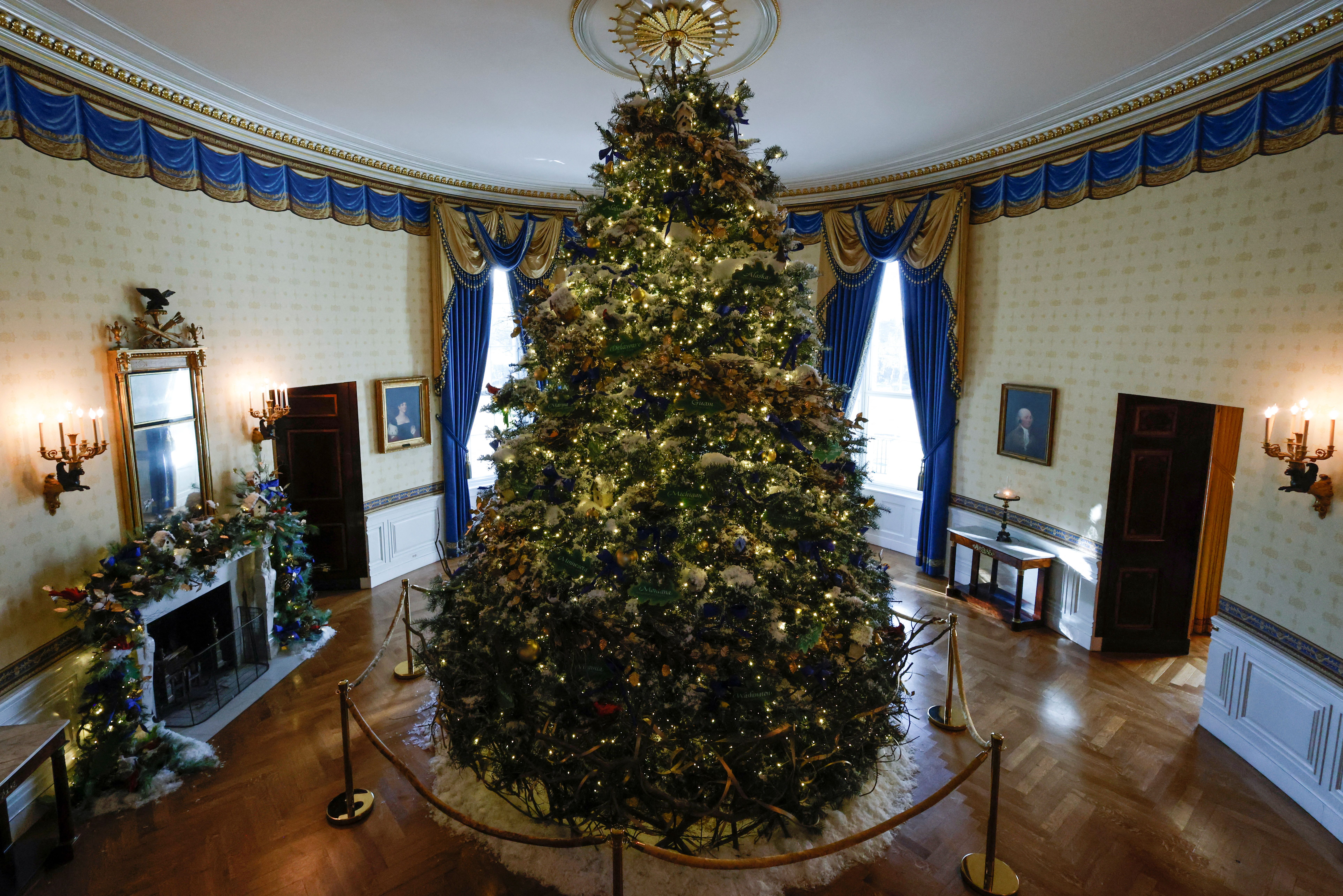 The White House Christmas tree is on display in the Blue Room as Christmas decorations themed “We the People” are unveiled. (REUTERS/Jonathan Ernst/)

Likewise, both Willow and Commander, the Biden family dogs, appear in some other room in cardboard format, while other animal figures such as those of the official birds of the 57 states, territories and the District of Columbia hang from the large tree of the “Blue room”.

To the decoration is added the music of the orchestra that accompanies the president when he receives guests, such as at state dinners and signing bills.

Christmas songs like Sleigh Ride” and the “Dance of the Sugar Plum Fairy” from the Nutcracker “ballet” are the most desired by attendees, confessed the director of the United States Marine Band, Jason Fettig, to EFE, who has been preparing the repertoire for two weeks. 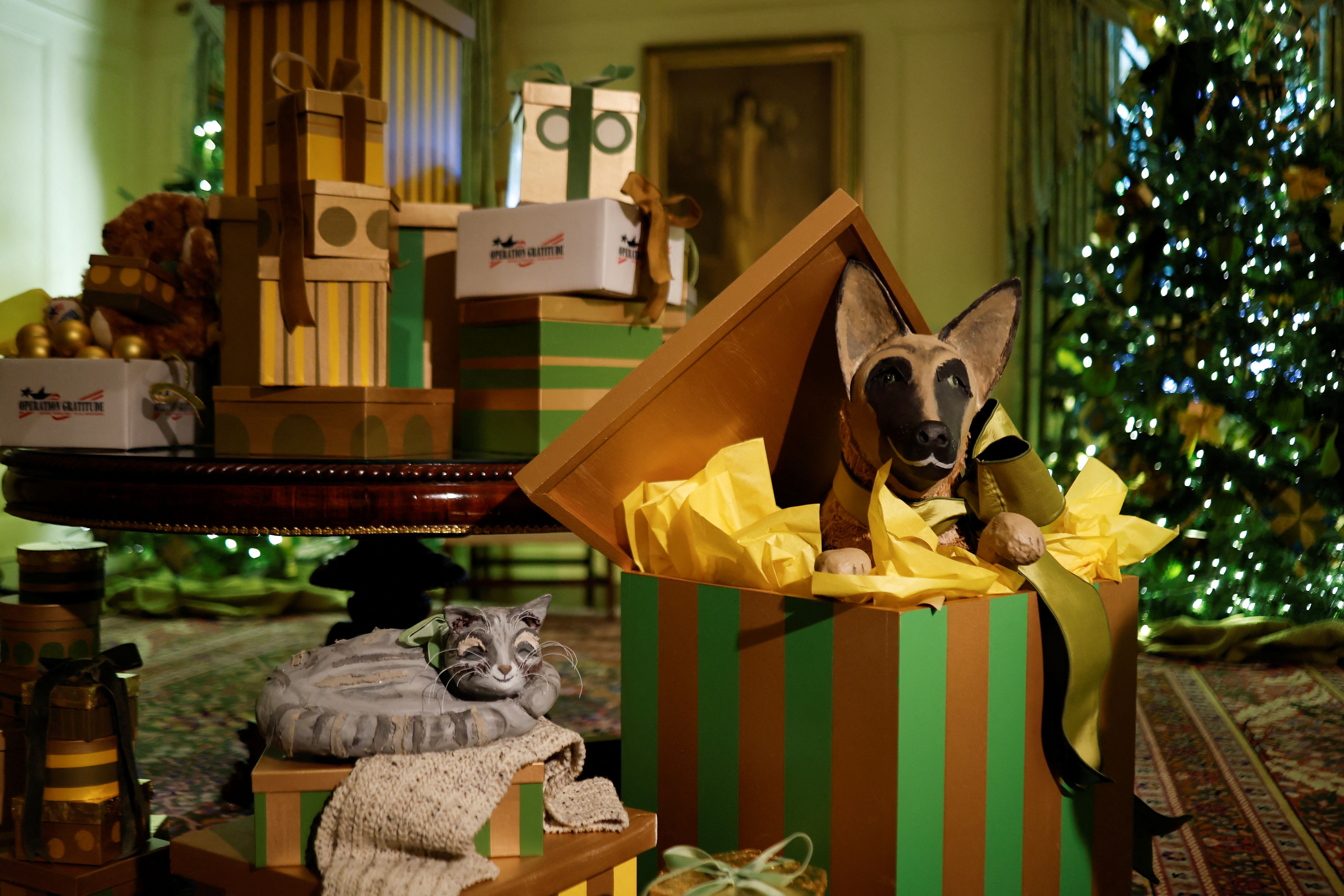 Decorations depicting US President Joe Biden’s Commander dog and Willow cat look like Christmas decorations on the theme “We the People”. (REUTERS/Jonathan Ernst/)

Even with 25 more events on the agenda, the presidential orchestra will liven up the Christmas decorations for all those who visit the White House this December.

The press secretary of the First Lady’s Office, Vanessa Valdivia, assured EFE that they expect some 50,000 people to visit these rooms. 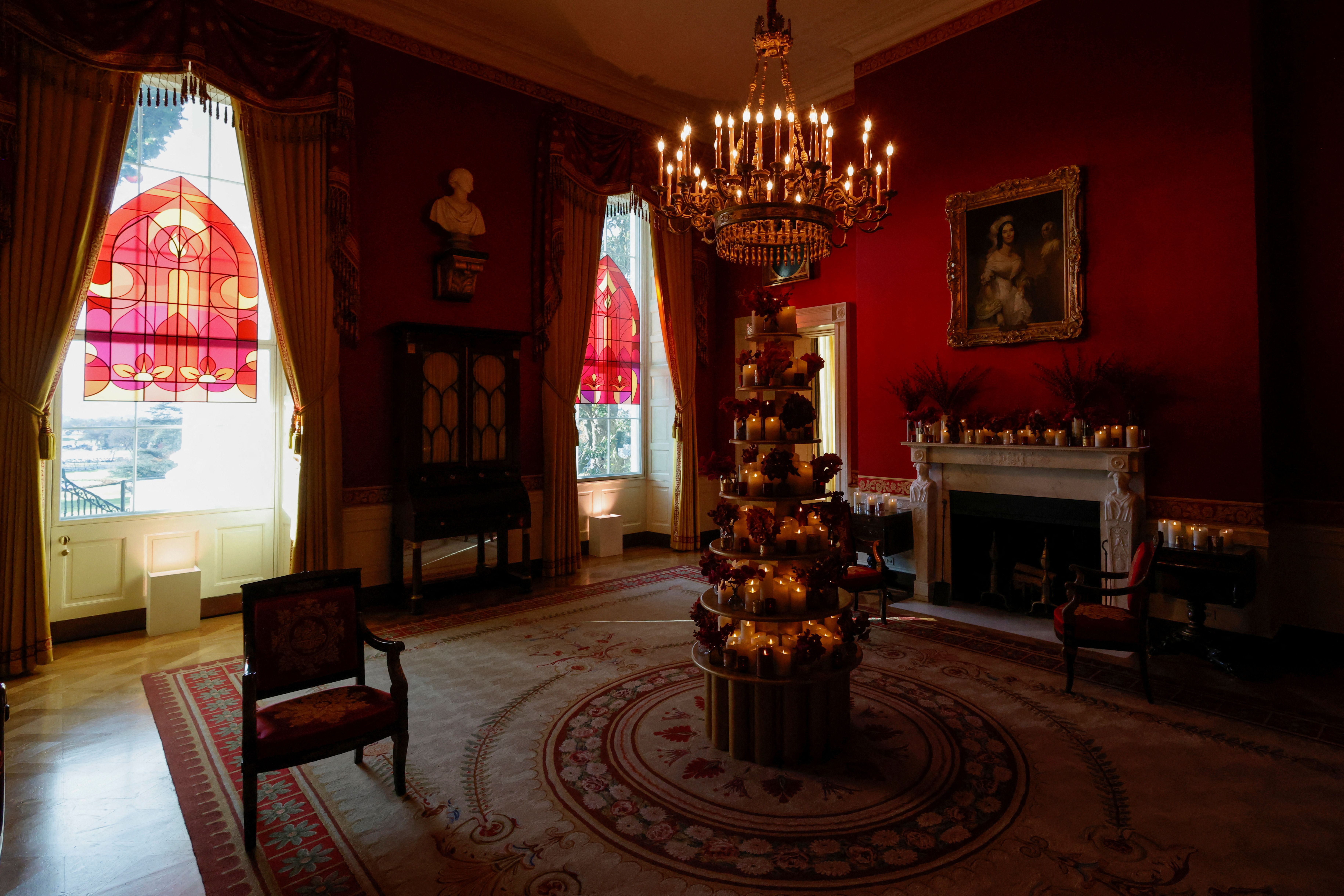 The Red Room features a tower of candles and flowers, as well as stained glass windows, while Christmas decorations on the theme of “We the People” are revealed. (REUTERS/Jonathan Ernst/) 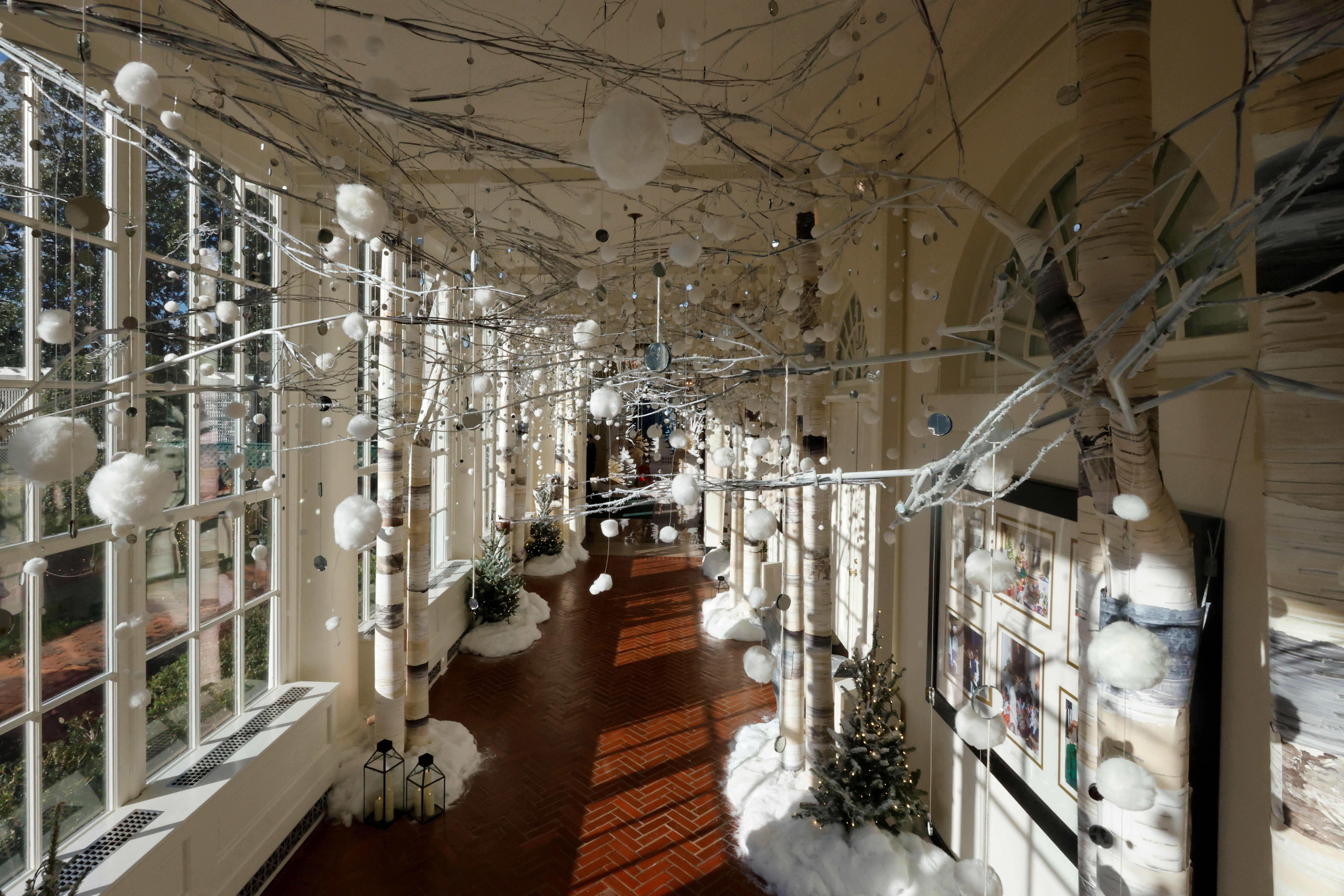 Trees meant to portray a first snowfall in the woods line the eastern colonnade as “We the People”-themed Christmas decorations are unveiled. (JONATHAN ERNST/) 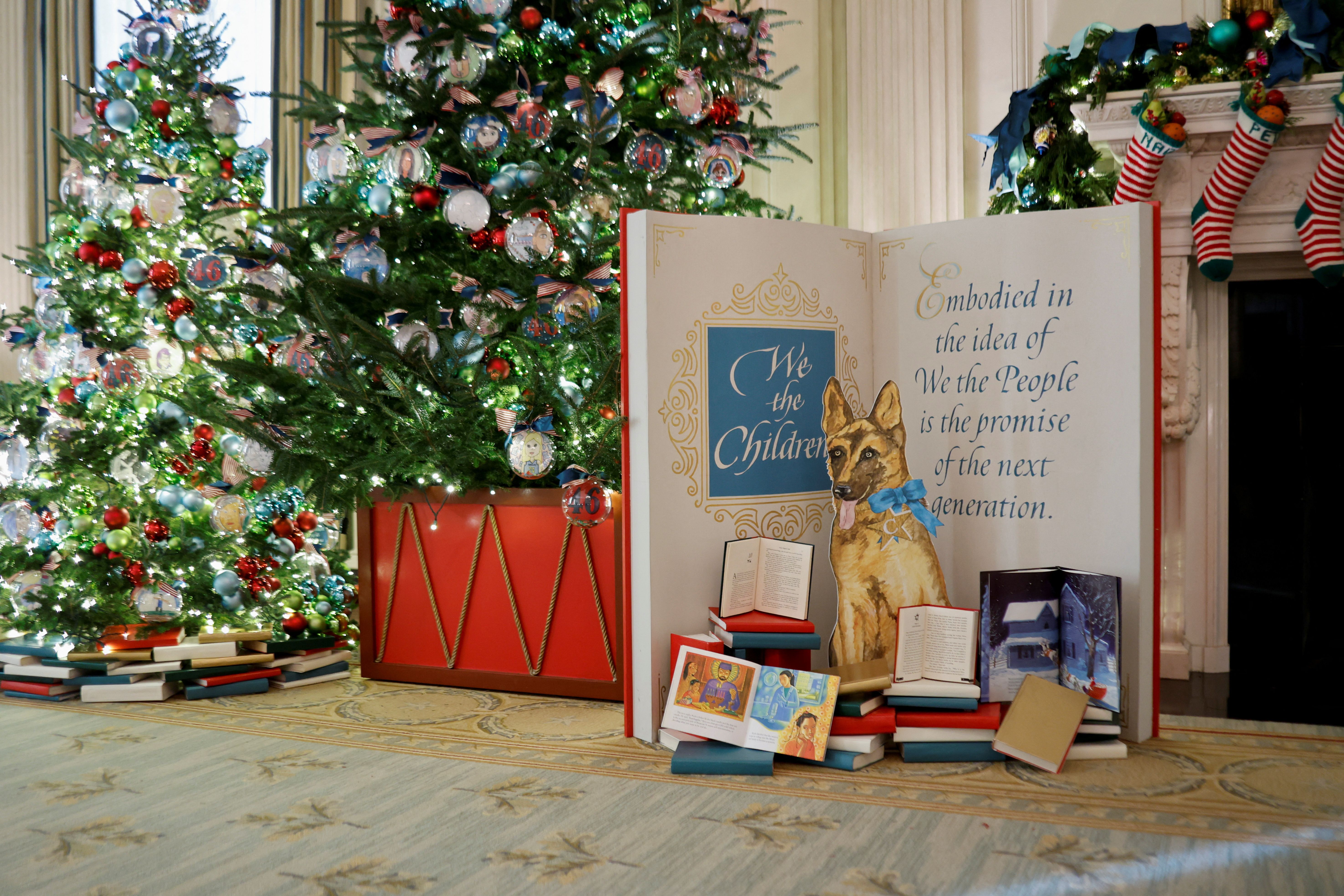 Christmas decorations depicting US President Joe Biden’s dog Commander are seen during a press tour ahead of Christmas receptions for President Biden and First Lady Jill Biden, at the White House in Washington. (JONATHAN ERNST/)

Share
Facebook
Twitter
Pinterest
WhatsApp
Previous article
Young man invaded the field with an LGBTI flag, in addition to messages about Ukraine and Iranian women
Next article
Bruno Fernandes, the star of the controversial greeting to Cristiano who now hugs him in Qatar 2022

The research company Yoartificial intelligence (AI) Open AI He has launched ChatGPT Plus, the paid...

Last Wednesday, David Beckham gave an entertaining interview to the sports medium ESPN. In it, the owner of...

Rosalía and her representative break their employment relationship after 6 years

rosalia and her representative, Rebeca León, broke their employment relationship amicably, after 6 years of working together, Billboard magazine...

Ancient Egypt never ceases to fascinate. A team of international researchers from the Louis Maximilian University of Munich...

Hong Kong is back on the world scene, its leader said Thursday that he launched a campaign entitled...

The European Union is ready to take a tougher...
World