Russia has raised its tone and expressed its fury once more, but this time against the Pope Francisco. The controversy broke out after the pontiff blamed the chechens and other ethnic minorities most of the atrocities committed in the war in Ukraine. “Generally the cruelest are perhaps the peoples who are from Russia, but are not from the Russian tradition, like the Chechens, the Buryats, etc.”, said the highest authority of the Catholic Church in an interview published on Monday the 28th in “América”, an American Jesuit outlet.

LOOK: The cheap little precision bomb the US wants to send to Ukraine instead of missiles

The Kremlin’s response was swift. According to the Russian state agency RIA Novosti, Moscow’s ambassador to the Vatican filed an official complaint after the statements, while Russian Foreign Ministry spokeswoman Maria Zakharova said the pope’s words go “beyond Russophobia ” and described them as “perversion”.

After several setbacks on the battlefield, Russia announced in September the recruitment of hundreds of thousands of men for the Army. Various civil and human rights organizations have accused Moscow of disproportionately resorting to ethnic minorities from Siberia and the Caucasus, such as the Chechens, who die in greater numbers than Russian soldiers in the war.

In turn, these minorities have been assigned a violent role in some Ukrainian towns, although Russian troops have generally been accused of war crimes, regardless of their ethnicity.

Regarding the Pope’s words, it is not clear what he meant by the “Russian tradition”, but it could be an allusion to the Russian Orthodox roots of 68% of the population. The Chechens are predominantly Muslim and the Buryats Buddhist. The Associated Press news agency also notes that Francis has avoided directly condemning Moscow for fear of antagonizing the Russian Orthodox Church.

In any case, the controversy has once again focused attention on the Chechens and their role in the conflict.

A town that suffered two wars

Chechnya is a territory of only one million inhabitants in the North Caucasus that is part of the Russian Federation and whose majority of the population is Muslim.

Almost 30 years ago, this territory dared to declare its independence from Moscow when the Soviet Union was disintegrating, but suffered badly for its defiance. The Russian Army twice invaded Grozny, the capital of Chechnya, razing the city and crushing its people into submission each time.

The newspaper “The New York Times” affirms that it was within the framework of that conflict that Vladimir Putin first developed his strategy to reaffirm Russian dominance by imposing his control on peripheral regions of the former Russian empire.

“Their methods are brute force and terror: bombing and besieging cities, deliberately targeting civilians, and kidnapping and imprisoning local leaders and journalists to replace them with loyal collaborators. The tactics are taken directly from Joseph Stalin’s manual, as written by former Secretary of State Madeleine Albright shortly before she died.”, says the medium.

But the decisive blow against Chechnya, the paper says, was using Russia-loyal Chechens to assert control. He recalls that six years into the war, Putin persuaded Chechnya’s chief mufti to betray the rebel cause. It was then that the mufti’s son, Ramzan Kadyrov, became the main “Putin’s henchman and has provided Chechen fighters to support Russian forces in the wars in Syria and now Ukraine”.

The Chechen leader Ramzan Kadyrovclose ally of the Russian president Vladimir Putinhas acquired more prominence since the advance of the war in Ukraine. And not for the best reasons. 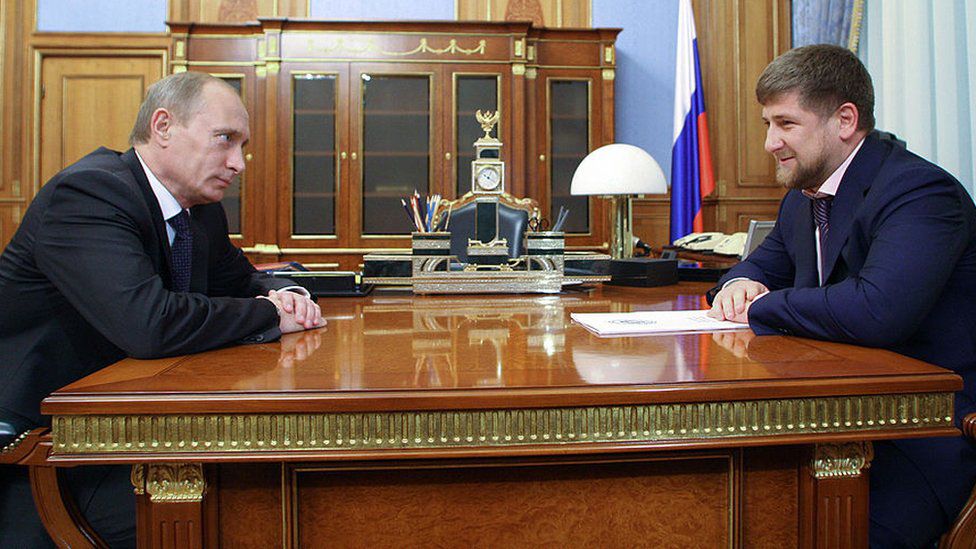 Putin appointed Kadyrov as president of the troubled Caucasian republic of Chechnya and he has suppressed all attempts at secession.

“The New York Times” calls Kadyrov “a ruthless leader who exercises near-total control in Chechnya.” Indeed, his excesses and acts of brutality by him have become part of a series of internal difficulties facing Putin.

In exchange for providing strong electoral support for Putin and stamping out separatist sentiment and political dissent in his region, Kadyrov has been given the ability to rule Chechnya as he sees fit. The unpunished persecutions of those who disagree with him are daily bread.

The BBC recalls that Kadyrov’s critics link him to several murder cases, something he denies. Even before being president, the Chechen leader had a powerful militia known as the “Kadyrovtsy”, made up of thousands of paramilitaries whose mission was to eliminate rebel forces in the region.

“Human rights organizations have accused this militia of being behind many of the murders, kidnappings and atrocious crimes committed in that Caucasus republic, something that Kadyrov denies, although he has admitted that there are certain “rogue elements” among the militiamen.”, says the medium.

“The New York Times” adds that Kadyrov’s allies are believed to be responsible for the murders of his critics in Russia and Western Europe.

Netflix has launched the new function 'Mystery Box' globally, with which it will offer a space “safe and...

In the march against the pension reform in Paris: “We won’t get anything without tightening”

Ahead of the procession, Korin closely watches the leaders of the eight confederations gathered under the banner before the...