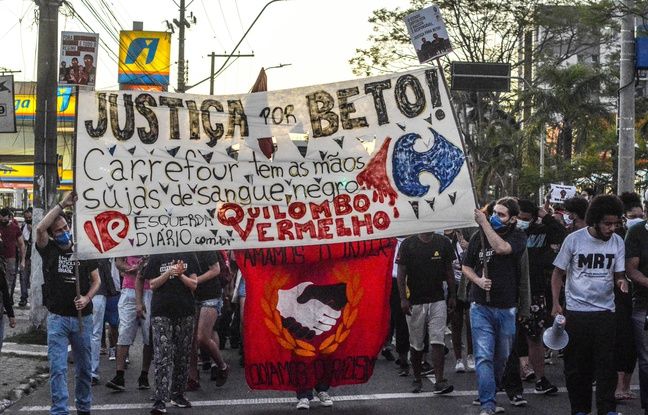 The investigation is moving forward in Brazil into the death of a black man, beaten up on November 19 by two white guards from a Carrefour store. Brazilian police on Tuesday arrested a supermarket official in Porto Alegre as an alleged “co-perpetrator” in the murder, which sparked a stir in the country. The two guards were for their part imprisoned.

Present at the scene of the murder

“She had authority over the two supervisors. Because of her position, the law considers her as a co-perpetrator of the murder. His pre-trial detention has been requested, ”a police investigator, Vanessa Pitrez, quoted by the UOL news portal said at a press conference. According to a shocking video released by the media, the supervisor appeared alongside the two supervisors when they attacked Joao Batista Rodrigues Freitas in the Carrefour parking lot, where he was beaten to death.

The woman, who had been seen filming the scene, allegedly lied to investigators during her first interrogation, claiming not to have heard the victim call for help and claiming that one of the guards was a police client of the supermarket, to hide the fact that he was employed by Carrefour. “Help me,” the victim can be heard saying in the video, as the supervisor stands a few steps away. “It hurts, I’m going to die,” said the 40-year-old man, who died the day before Black Consciousness Day, celebrated across much of Brazil.

The official, according to excerpts from her testimony broadcast on the Globo channel, said she had repeatedly asked the guards to release the man. However, in some excerpts from the video, he is heard warning that he must calm down if he wants to be released or tell him that he will not be released until the police arrive.

This homicide provoked anti-racist demonstrations in several cities in Brazil. On Monday, a march in Porto Alegre degenerated into clashes between a group of protesters and the police, outside a branch of the French supermarket chain Carrefour. After seeing its shares fall on the Sao Paulo Stock Exchange on Monday, Carrefour announced the creation of a fund of 25 million reals (about 4 million euros) to promote actions against racism in Brazil.