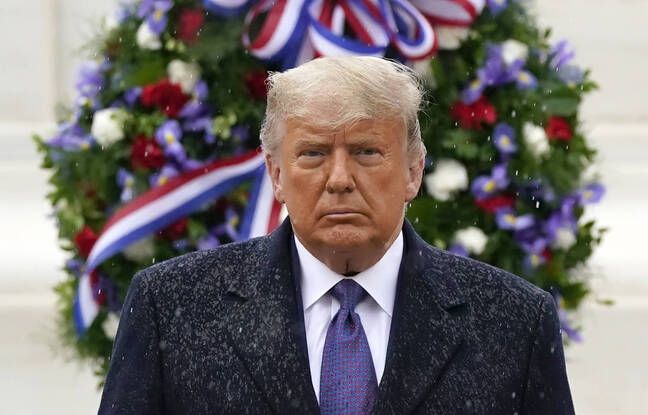 One more step towards acknowledging his defeat. For the first time, Donald Trump announced on Thursday that he would leave the White House if Joe Biden’s victory in the November 3 presidential election was confirmed.

Is he ready to formally admit defeat if the college of grand voters confirms Democrat Joe Biden will be the next US president? “It will be something very difficult to accept, because we know that there has been massive fraud,” he replied, questioned by journalists during a trip.

“I think a lot will happen by January 20”

Will he then leave the White House on January 20, the day of the swearing-in of the next President of the United States? “Of course I will. And you know it, ”he replied half-heartedly. These words, in the mouth of Donald Trump, are important, because his refusal to admit the victory of his opponent is unique in the history of the country. Even if the handover between him and Joe Biden at the beginning of next year was no longer in doubt.

The College of Grand Electors will meet on December 14 to officially designate the winner of the election. It should be a formality. “I think that a lot of things will happen by January 20,” also insisted on advancing the outgoing president. So far, all legal remedies brought by the outgoing president have failed. And the key states of this election, one after the other, certify the results.

The transition between the two teams has started

Donald Trump again affirmed Thursday that the electoral infrastructure of the United States was that of “a third world country”. But he has offered no evidence or concrete evidence to support his accusations of cheating on Democrats. He also announced that he would travel to Georgia on December 5, where the election of two senators in January will determine the majority in the upper chamber.

Joe Biden, former vice-president of Barack Obama, won 306 voters against 232 for Donald Trump. He built his victory by tearing up several old Democratic strongholds conquered in 2016 by Donald Trump, such as Pennsylvania, Michigan and Wisconsin. Already last Monday, Donald Trump was forced to give the green light to the launch of the transition process between his administration and that of the president-elect. Joe Biden now has access to files, funding and receives briefings from US intelligence services.

The Democrat also has access to information regarding the Covid-19 pandemic and the progress of the various vaccine projects. The much-criticized management of the health crisis in the last months of a tumultuous presidency played a key role in Donald Trump’s electoral defeat. The pandemic has claimed more than 260,000 lives in the United States, the heaviest toll in the world. Without delay, Joe Biden, 78, also began to prepare for his arrival at the White House, by announcing the first appointments of his future government.

Several personalities who served under Barack Obama will be part of it, such as Antony Blinken, future head of diplomacy. Former Secretary of State John Kerry, 76, will also return to Washington as the president’s special climate envoy, a sign of the importance Joe Biden attaches to this issue. The president-elect is due to announce next week who will be part of his economic team. Janet Yellen, the former chairman of the Federal Reserve, the US central bank, is expected to be appointed Secretary of the Treasury.