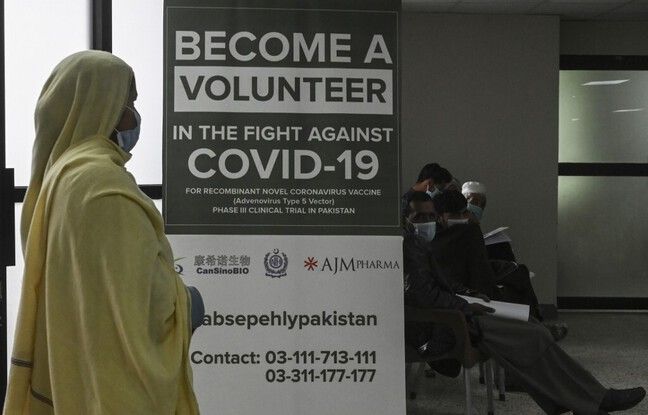 A Chinese vaccine against Covid-19, pending approval, has been administered to thousands of Pakistani volunteers, an official source announced on Wednesday.

Developed by the Chinese laboratory CanSinoBio and the Chinese Institute of Biotechnology in Beijing, the vaccine has been injected into nearly 7,000 people out of the 10,000 expected participants, according to officials in charge of the vaccination campaign.

The first results expected “in the next two or three months”

“I volunteered for a noble cause that will help humanity,” said a volunteer at Shifa Hospital in Islamabad, where vaccinated people receive $ 50 (€ 42) for their sentence. “Others should volunteer and participate in this noble cause that will save lives,” he added. Ejaz Ahmad Khan, the researcher in charge of overseeing the trials in Pakistan, said the first results on the efficacy of the vaccine were expected “in the next two or three months”.

The search for a vaccine accelerated this month, with four manufacturers announcing that their vaccine was effective: the US-German alliance Pfizer / BioNTech, US laboratory Moderna, UK AstraZeneca / University of Oxford alliance and the Russians from the Gamaleïa State Institute.

A second wave “more deadly” than the first

The latest official figures show more than 382,000 people infected with the new coronavirus for more than 7,800 deaths in Pakistan. Although many experts estimate that they are actually much higher due to the number of tests being limited, these statistics remain rather low for a country of almost 220 million inhabitants.

But Pakistani health officials have warned this week of a second wave that is likely to be “more deadly” than the first, and called on the population to respect social distancing rules better.

Doctors said hospitals across the country were nearing saturation and some were even starting to turn away patients. The Chinese vaccine tested in Pakistan is also in the third phase of clinical trials, the last, on humans, before possible approval, in China, Russia, Chile, Argentina and Saudi Arabia.