Testing drugs before the party: a campaign protects consumers in Colombia

Night falls on Bogota and the young people, some dressed in black and with metallic makeup, file forward under a tent of music and lights. Before joining the party, they give their cocaine, ecstasy or acids a quick test to rule out dangerous adulterations.

A group of volunteers is in charge of the testing, thanks to an official authorization that allows them to analyze the substances that consumers carry in the minimum doses authorized by law.

SIGHT: Colombia will request a vaccination card with a complete schedule to enter the country

“Today I came to test an LSD acid substance to (…) know what is entering our body and be able to enjoy it responsibly”Brian Ramírez, a 24-year-old university student who attends the service for the first time, tells AFP.

“Give it head”Is an initiative that began in 2014 and its image is a colored brain split in two. The name comes from the informal expression “to give in to the head” (to take drugs) and aims to promote responsible consumption.

The country that produces and exports the most cocaine in the world decriminalized the carrying and consumption of the minimum dose in the 1990s. Before, if someone was caught with small amounts of drugs, they could go to prison and receive forced addiction treatment.

A woman holds a bag containing ecstasy (MDMA) during a techno music party on the outskirts of Bogotá, on November 19, 2021. (JUAN PABLO PINO / AFP).

The conservative government of President Iván Duque wanted to attack the increase in micro-trafficking by restoring powers to the police to confiscate the minimum dose. But the justice upheld the right of consumers.

“We have regulated the way of consuming drugs from below, from a logic of pleasure, not from crime or persecution”, says sociologist Julián Quintero, founder of the initiative.

In 2013, 3.5% of Colombians claimed to have taken illegal substances at some point in their life. For 2019, the figure jumped to 9.7%, according to the National Administrative Department of Statistics (DANE). There are no recent studies on consumption.

Although reports of police abuse abound, the initiative gained space at parties, concerts and festivals, whose organizers finance the tests. The program also has a headquarters in Bogotá where each test costs almost four dollars and receives resources from an NGO that does consultancies on the subject.

It currently performs up to 250 tests a month in Bogotá and other cities, according to those responsible. 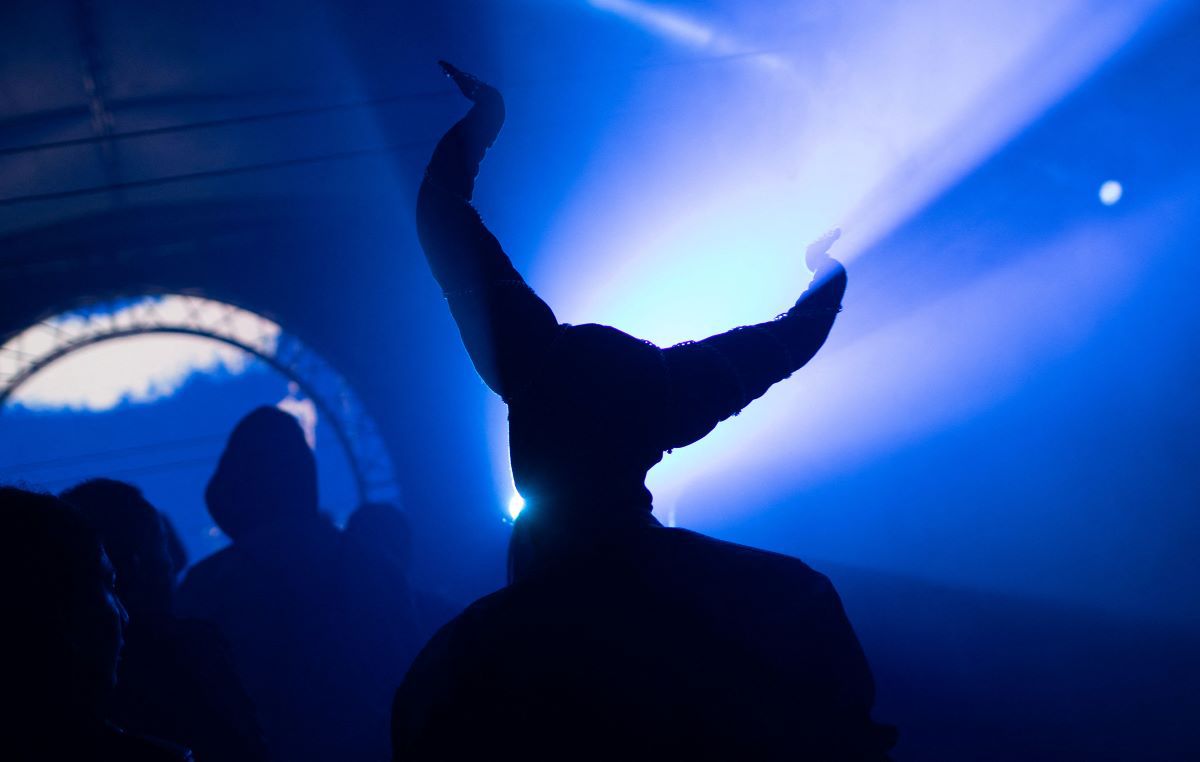 At the party, a fuchsia and green flag on a black background warns of the presence of the “Échele Cabeza” volunteers, some of them self-confessed consumers.

They file ecstasy pills or cut papers with acid and then dip the samples in reagent liquids that turn dark purple when detecting MDMA (an amphetamine that is the active ingredient in ecstasy) or lysergic acid diethylamide, a popular and illegal hallucinogen known as LSD.

They also analyze cocaine, to which they add reagents and centrifuge to determine its purity.

Faced with a positive result, they advise the consumer on the recommended dose and possible side effects. A negative one, on the other hand, alerts about a possible adulteration and then the advice is unanimous: “Dump that drug.”

“I have always felt curious to test and say: ‘really what I am consuming is something that is legitimate,'” says Ramírez, who claims to have had episodes of “mania” for adulterated ecstasy pills.

Today you know that the paper you bought on the black market contains LSD. “It is up to you to make the decision whether or not to consume that,” he adds. 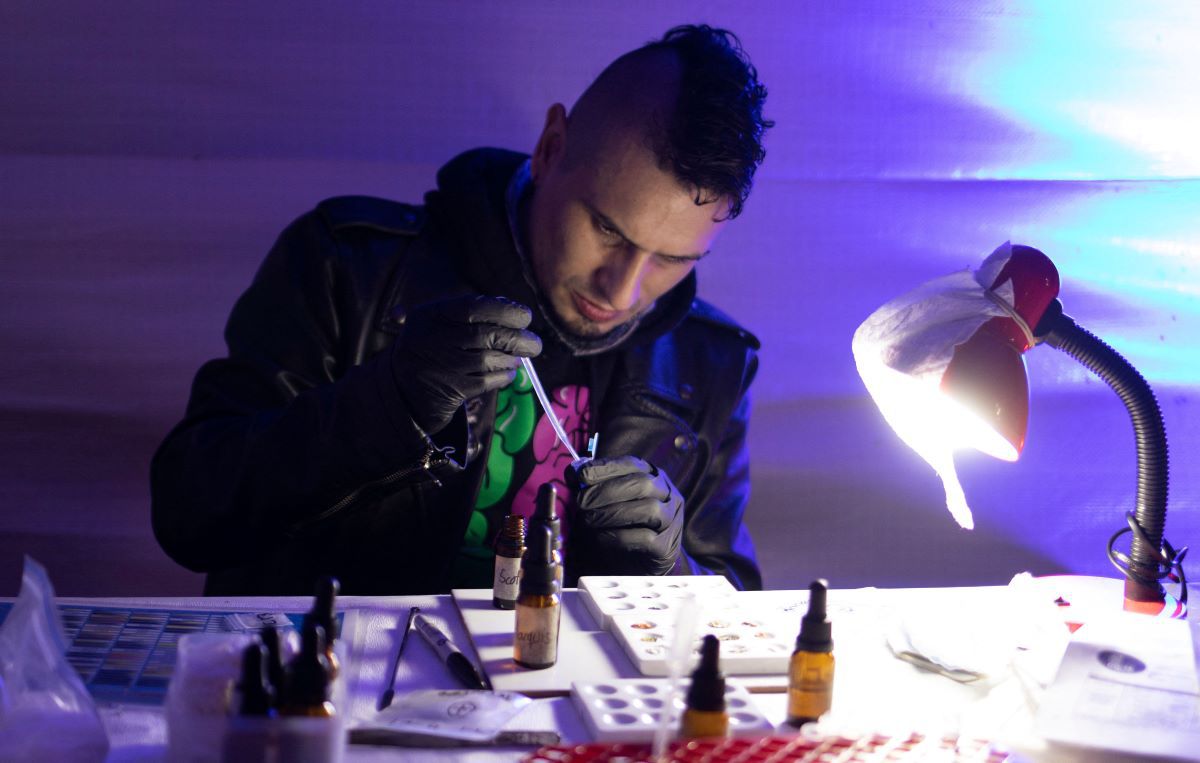 David Moreno, from the NGO Echele Cabeza, examines a cocaine sample during a techno music party on the outskirts of Bogotá, on November 19, 2021. (JUAN PABLO PINO / AFP).

Despite the persecution, Colombia produces cocaine and marijuana in industrial quantities for export.

While marijuana and cocaine remain the most popular, synthetics such as ecstasy are on the rise, mostly imported from Europe. In Bogotá, seizures of this component went from 519 pills in 2015 to 54,431 in 2019, according to the Ministry of Justice.

“Colorimetric tests have a great bias: one substance can be overshadowed by the other,” warns Diana Pava, toxicologist at the Research Group on Psychoactive Substances at the National University of Colombia.

Black market drugs also “may have other chemicals such as drugs, cleaning and hygiene products or even pesticides (…) that this test is not detecting.”

“We have to make more robust methodologies,” explains the toxicologist. “People always think: if I get tachycardia, if I get a heart attack, if I get a brain injury, but what about my mental health? You have to pay close attention to that ”, he warns.

Sometimes testing finds that pills marketed as ecstasy or so-called MDMA crystals actually contain other stimulants that can be fatal.

Mateo Pineda, a 28-year-old psychologist, relates that when he used adulterated substances he felt lost, without “knowing who” he was. The young man brought to the service a sample of supposed MDMA that kept him awake for 72 hours.

“They confirmed our suspicions: it was methamphetamine, it was not MDMA.”

Share
Facebook
Twitter
Pinterest
WhatsApp
Previous article
After “The Batman”, Colin Farrell will take over the role of the Penguin in a spinoff series
Next article
Chris Noth takes sides between Sarah Jessica Parker and Kim Cattrall … Machine Gun Kelly and Pete Davidson pose in underwear …

The president of Mexico, Andres Manuel Lopez Obrador (AMLO)began the march of the Angel of Independence to the Zócalo...

Goal by Lapadula in Cagliari: Gianluca did not miss a penalty and made it 2-2 against Frosinone | VIDEO

Gianluca Lapadula's goalscoring records have grown as the season progressed and this Sunday he once again displayed his efficiency....

Daddy Yankee joins Myke Towers for the launch of “Ulala”

‘Let’s not get excited’: Moroccans, having started well at this World Cup, remain focused

Young Moroccans didn't know what it means to win their country in the final stage of the World Cup....

The highest authorities of Venezuela commemorated this Sunday the 30th anniversary of the coup attempt on November 27, 1992,...

Luis Enrique receives the hug of the world. He is not only the coach of one of the...

The highest authorities of Venezuela commemorated this Sunday the...
World

The Pope Francisco today summoned the authorities of...
World

Spain: Thousands of Vox supporters in the streets to protest against the Sánchez government

Thousands of supporters of the far-right party vox ...

Goal by Lapadula in Cagliari: Gianluca did not miss a penalty and made it 2-2 against Frosinone | VIDEO

Daddy Yankee joins Myke Towers for the launch of “Ulala”