“Don’t close your eyes!”: The moving testimonies of the tragedy of the truck with migrants in southern Mexico

“Do not sleep! Don’t close your eyes! ”, A migrant pleads with his injured companion. Minutes earlier, the truck they were traveling in, crowded and fearful, overturned on a highway in southern Mexico with a balance of 55 dead and dozens of injured.

SIGHT: Tragedy in Mexico: 55 migrants die in the accident of the trailer in which they were traveling overcrowded | PHOTOS

That scene is the first thing Sabina López saw and heard, one of many residents of El Refugio -a popular neighborhood near the highway- who ran after hearing the roar of the trailer that smuggled a hundred illegal immigrants, mostly Central Americans.

LOOK: Tragedy in Mexico: “It is very painful,” AMLO laments a trailer accident with migrants in Chiapas

“Remember what you promised your mom! Hold”, Sabina recalls that the man implored his badly injured friend.

The scene the woman found was bleak: dozens screaming in pain, many trapped in the smashed box of the vehicle, others unconscious and some unharmed but hugging, terrified and incredulous.

“It was horrible to hear the wailing. I just thought of helping ”, Lopez, 18, told AFP.

Shortly after, the Prosecutor’s Office confirmed the magnitude of the horror: 55 of them died in the collision and as many were injured.

That report did not specify the nationality of the victims, but regional authorities said that the majority are Guatemalans.

Workers remove the container from the trailer of a truck that crashed with migrants on board during a traffic accident in Tuxtla Gutiérrez, Chiapas state. (GABRIELA COUTINO / AFP).

Dead scattered on the highway

The loud sound of the crash alerted that something serious had happened and once on the road the suspicion was confirmed.

López explains that the trailer crashed into the wall of a pedestrian bridge and tipped over with such violence that the box broke in half and the roof came off.

“The Migration officers arrived and told us to help collect the backpacks because identification documents come there. So we put them aside, we piled them up and they took them away ”, reports.

They themselves assumed the role of rescuers. They lowered the migrants from the box as best they could. The deceased were deposited in a row on the asphalt and then covered with white sheets.

“There were a lot of people lying around, some were already dead. We helped the paramedics in what we could with other boys to help those who still had vital signs ”, narrates Isaías Díaz, who arrived 15 minutes after the accident.

Other residents of El Refugio claim that the driver and another person who was with him were bloodied, but they fled, almost dragging their feet. 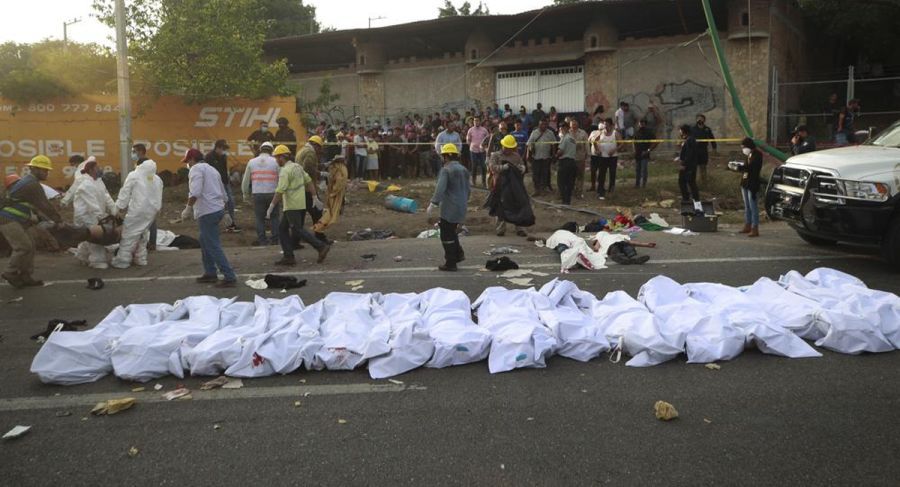 Several bodies in bags remain on the side of a highway after an accident in Tuxtla Gutiérrez, in the state of Chiapas, Mexico. (Photo: AP)

The transfer of migrants in trucks is one of the most common methods with which human traffickers intern them in Mexican territory, with the aim of reaching the northern border of the country and trying to cross into the United States.

Some, desperate, called the emergency services. Others were dedicated to the inevitable: beginning to accommodate the dead.

Minutes later, a first police patrol appeared, whose agents limited themselves to telling them that they would make calls for the help of the ambulances to arrive “as soon as possible”.

Neighbors indicated that a municipal police checkpoint is located a few kilometers from the scene of the tragedy, so they are surprised that the trailer was moving at high speed.

“It was terrible, really … The crying, the pain, the despair. There is a very ugly atmosphere ”, Diaz adds.

In addition to helping them, some neighbors consoled the survivors, offering them water or their cell phones so that they could communicate with their families, AFP testified.

Share
Facebook
Twitter
Pinterest
WhatsApp
Previous article
No, the AP-HP does not conduct an illegal clinical trial on the third dose of the vaccine
Next article
German Parliament Approves Mandatory Coronavirus Vaccination For Healthcare Workers