“I preferred to lose my job rather than get vaccinated”

Danielle Thornton was in line outside the school waiting for her children when she learned she would be faced with a life-altering decision: whether to get the vaccine. covid-19 or lose his job of nearly nine years at Citigroup.

She and her husband watched for months as bosses around U.S implemented vaccine mandates, knowing that his family could face this moment. Then the news reached him via email on his phone.

LOOK: “The only way out is the airport”: the exodus of young professionals leaving Argentina

“We had a lot of conversations about it,” dice. “But in the end we decided that our freedom was more important than a payroll”.

Danielle is one of thousands of people across the US who have chosen to lose their jobs rather than receive flu shots. covid.

They represent a small minority. Many of the employers who have introduced such rules – about a third of the nation’s largest companies and 15% of small businesses – say the vast majority of their employees have complied.

At Citi, a company that allows medical and religious exceptions, more than 99% of employees have met the requirements that apply to the bank’s more than 65,000 workforce in the US.

Experts say that vaccines are safe and that they are the best way to prevent serious infection. But the mandates — seen as a key factor in prompting the 25% of Americans who have not yet been vaccinated to get inoculated — face stiff resistance around the country, where people see them as an affront to beloved national ideals. as the personal freedom and privacy.

This month, the US Supreme Court rejected an order by the president Joe Biden that would have required Americans in workplaces with at least 100 people to get vaccinated or wear masks and take weekly exams, all paid for.

Judges on the country’s top court have called the regulation a “significant invasion” into the lives of millions of workers, and have ruled out the possibility of implementing national rules like those planned by countries like Germany.

Although US courts have been more open to allowing states and businesses to introduce requirements of their own, popular opposition remains high.

Opposition to vaccination mandates, overwhelmingly in Republican states, has grown across the country. (REUTERS).

About 55% of workers support the implementation of vaccination mandates by employers, but more than a third still reject them, a December Gallup poll suggests.

In the end, the city, which has since expanded the rule to private employers, furloughed 9,000 workers when the mandate took effect, while several hospitals in the state also lost employees.

“I don’t think it’s up to the government to dictate things that are between a human being and their creator,” says Donna Schmidt, who lives on Long Island and worked as a neonatal nurse for 30 years before quitting because of vaccine requirements.

The 52-year-old says she loved her job, but rejects the vaccine for religious reasons and personal preference. He is now reinventing himself as an activist, organizing the group New Yorkers Against Medical Mandates. 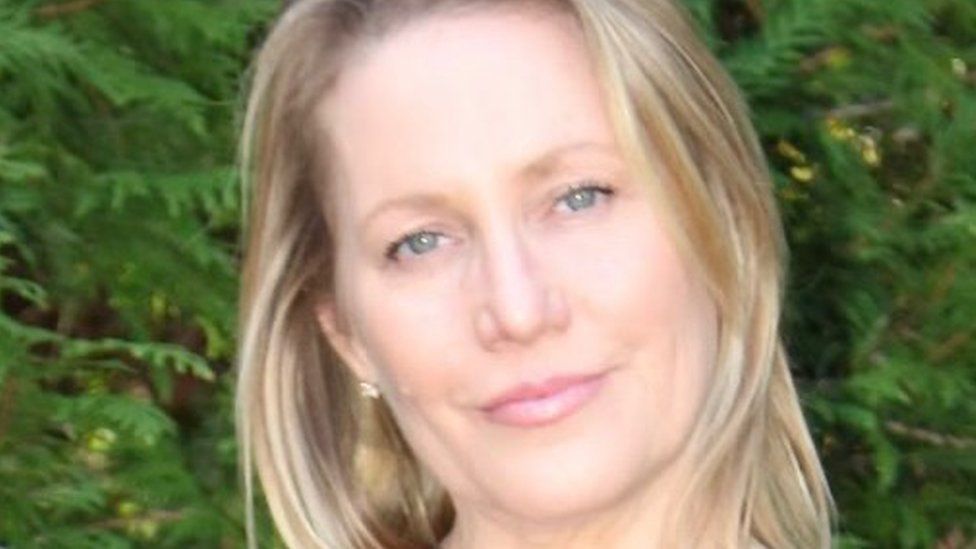 Former nurse Donna Schmidt says she has had no second thoughts about leaving her job.

“We don’t think twice. What has happened here is a duel,” he says. “I really care about my patients, so to be banned by a government entity that says ‘you don’t belong here anymore,’ it’s hard.”

Danielle, who worked remotely for Citigroup from Missouri as an operational risk manager, says she is not a politician or “someone who is against vaccines.”

But the 33-year-old mother of four has refused to get a vaccine that she says “doesn’t seem to be stopping this virus.”

His last day was January 14. He says he’s lucky to be in a financial position that allows him to quit his job with no plans, for now, of getting another one.

He didn’t bother to seek a medical or religious exception.

“I should have the right to choose,” he says. “But of course, there are a lot of emotions … it’s a big change for our family.”

Companies with vaccine mandates say those measures succeeded in convincing much of their workforce to get vaccinated.

At Tyson Foods, some 60,000 people – or more than 40% of its US workforce – signed up for the vaccine after the company instituted the requirement in August, calling it the “most effective thing we can do to protect our team members.

At United Airlines, Chief Executive Officer Scott Kirby said his company’s policy reduced the number of employees in the hospital, noting that, before the mandate, at least one employee died a week on average.

“While I know many people still reject our policy, United is showing that the vaccine is the right thing to do because it saves lives,” he said in a memo to employees. 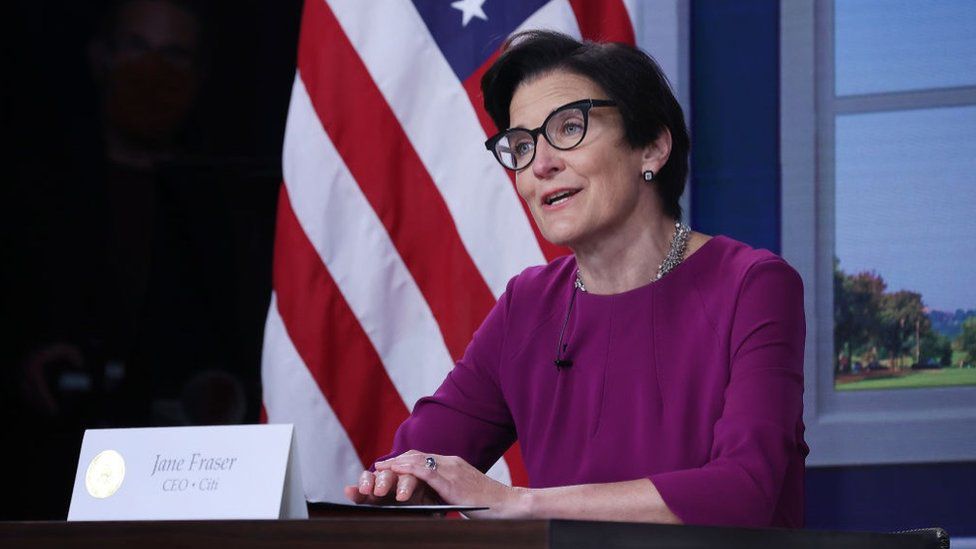 In addition to the health benefits, the companies have compelling financial and operational reasons for insisting. Health costs, often partially covered by employers, are higher for those who are not vaccinated, and they are more likely to miss work due to illness.

So far, however, most of the people affected by the mandates work in Democratic offices or states; groups most likely to have previously received the vaccine. Gallup estimates that only 5% of unvaccinated Americans face mandates of employers.

About 63% of Americans are “fully vaccinated”, compared to 84% in the UK (aged 12+) who have received two doses of the vaccine.

“A vaccination mandate would have the greatest impact on the lowest-paid workers and the least educated workers, but it would also create the most friction because the largest group of people would need to be vaccinated,” says Jeff Levin-Scherz, health lead for the population of WTW, the insurance and risk consulting company that surveyed employers about vaccinations.

Even before the Supreme Court decision, the number of Americans required to be vaccinated by their employers stood at at least a third, Gallup found in December.

Companies, including the coffee chain Starbucks, have backed out of their plans. Businesses are concerned about compliance costs and staffing shortages in a historically hot job market, says Emily Dickens, head of government affairs for the Society for Human Resource Management, which found that 75% of their respondents would not require weekly vaccinations or tests without a government mandate. 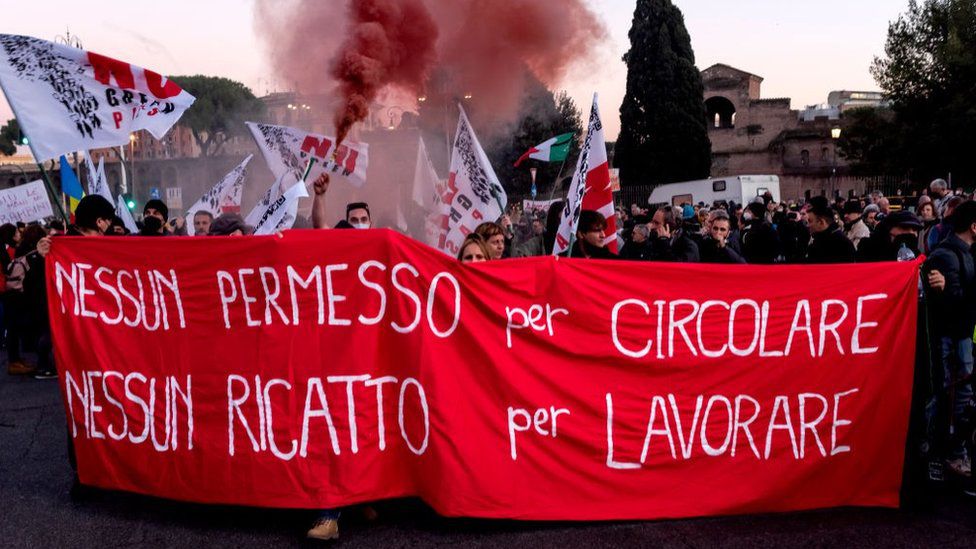 Vaccination mandates have fueled protests around the world, including in Italy. (GETTY IMAGES).

“It’s about access to talent in the workplace and the workplace culture,” he says. “Depending on the industry, telling people they have to be vaccinated may not work.”

But as long as covid continues to resist control measures, Dr. Levin Scherz warns that the pandemic could force the hands of companies.

“Employer vaccination mandates do work to achieve near-universal vaccination rates,” he says. “Now that we have a variant, omicron, that is so contagious, it is what we need if we want to stop contagion in the population.”