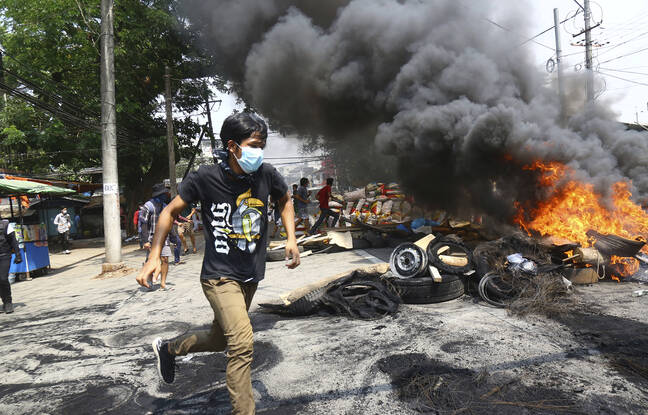 Protesters took to the streets this Sunday in Burma the day after the bloodiest day of repression since the February 1 coup, with at least 107 dead including seven children, violence strongly condemned by the international community. Activists for the restoration of democracy called for new demonstrations on Saturday, the day when the army organizes a gigantic parade every year in front of the head of the army, now head of the junta, General Min Aung Hlaing.

On Saturday evening, Min Aung Hlaing and his wife entertained dignitaries, including Russian Deputy Defense Minister Alexander Fomine, at a sumptuous alfresco dinner in Naypyidaw. The official mirror newspaper reported that a concert was given as well as a drone show featuring Min Aung Hlaing saluting.

The United Nations estimated Saturday’s death toll at 107 people – including seven children – but expects that toll to rise further. Local media report 114 dead. “The shameful, cowardly and brutal actions of the army and the police – which were filmed shooting protesters as they fled and which did not even spare young children – must be immediately stopped” , said two senior UN officials, Michelle Bachelet and Alice Wairimu Nderitu, in a joint statement.

The death toll since the February 1 coup has risen to at least 423, according to AAPP, a local NGO that records the death toll since the coup. This Sunday, the Burmese once again took to the streets of Yangon and other cities to demand a return to democracy, and numerous funerals were due to be held across the country, which is recovering from its bloodiest day since. the putsch.

The world is alerting

The heads of the defense forces of 12 countries, including the United States, Great Britain, Japan and Germany, condemned on the night of Saturday to Sunday the use of force by the Burmese army against “unarmed” civilians. “A professional army follows international standards of conduct and has a responsibility to protect the people it serves, not to harm them,” they say in a rare joint statement.

US Secretary of State Antony Blinken said he was “horrified” by the “terror” of the Burmese military. His British counterpart Dominic Raab considered that the junta had crossed a “new level” in the repression. The US embassy in Yangon asked its citizens to limit their movements on Sunday, calling on them to be “careful” if they had to travel. The American Cultural Center in Yangon was the target of gunfire on Saturday. The military used live ammunition in more than 40 townships in nine regions, including Yangon, the country’s largest city, according to the AAPP.

“Junta forces fired automatic weapons on residential areas, killing many civilians, including six children between the ages of ten and sixteen,” the NGO said. “The fact that the illegitimate military regime targets children is a serious act of inhumanity.”

Meanwhile, an armed rebel group from the Karen ethnic minority, the Karen National Union, claimed to have been bombarded by junta hunters in the east on Saturday, hours after the rebel group seized a military base.

This is the first air attack in this state in 20 years. The target, the Fifth Brigade of the National Karen Union (KNU), is one of the largest armed groups in the country and claims to represent the Karen people. New airstrikes on Sunday pushed 2,000 people from two villages in Karen state to cross the Thai border for safety, according to Hsa Moo.

From growing up in Breña to going on tour with Harry Styles: the Peruvian sound engineer who works with the star

Christian lived since he was little in the district of Breña, Lima. During the 1990s, he became deeply...

After France, Brazil became the second team to reach the round of 16 after two games. Having beaten...

A total of 12,526 web pages offering counterfeit products and pirated content have been removed from the internet during...

Microsoft and its idea to include Game Pass on PlayStation sounds “particularly hollow”, says Sony

PlayStation has ensured that Microsoft does not allow the multi-game subscription service of sonyPlayStation Plus, is available...

Casemiro, the king of the Champions League who also shines in Qatar 2022

casemiro He is a midfielder who performs beyond his responsibilities. The midfielder marks, removes, distributes and also scores....

He murdered a couple, bit his husband’s face because he believed he was “half dog, half man” and will not go to prison

a young man of Florida 25-year-old accused of...
World

WikiLeaks: Five newspapers call for an end to persecution of Julian Assange

'Publishing is not a crime': five media outlets (The...

From growing up in Breña to going on tour with Harry Styles: the Peruvian sound engineer who works with the star