How the Nador tragedy occurred, the deadliest attempt to cross into Spain from Morocco that causes international commotion

It is one of the bloodiest episodes in the history of the only land border between Africa and the European Union.

Since last Friday, June 24, the death of at least 23 people has been confirmed after 2,000 migrants of sub-Saharan origin tried to cross the Melilla fence, the fortified line that divides Spain and Morocco.

LOOK: The country that went from prosecuting drugs with the death penalty to being perhaps the most liberal in the world when it comes to marijuana

Various humanitarian organizations allege that the real death toll could be higher and demand an immediate investigation to clarify the causes of the event.

Spain blames what happened to the mafias that are dedicated to human trafficking and its Prime Minister, Pedro Sanchezdescribed the massive arrival of migrants as a “violent assault” against the “territorial integrity” of the country.

Morocco, for its part, was preparing since Monday to bury the deceased. An action also criticized by several organizations for considering it hasty, without carrying out due process.

Attempts to reach European territory through Ceuta and Melilla, two Spanish enclaves on the North African coast, are not uncommon.

But the latter has been the deadliest to date, and images released showing migrants piled up, some bleeding and lying motionless on the ground, have sparked international outrage.

How did the migrants die?

Residents of the area told the Spanish news agency EFE that the migrants arrived early Friday morning at the area of ​​the fence through the Moroccan town of nadora few kilometers from Melilla.

Many were armed with sticks, knives, stones and tools to cut through border bars, according to witnesses.

“It was the most violent attempt to cross into Melilla that I have ever seen,” Rachid Nejjarim, a waiter at a cafe near the fortified fence, told AFP.

“I saw migrants armed with sticks and iron bars…I was afraid of being attacked,” Nejjarim added.

It is estimated that around 2,000 migrants intended to cross into Spain.

Among them, 500 managed to get close to the fence to try to enter. It was there, trapped in one of the corridors of the border crossing, where the avalanche occurred that was fatal, according to the version of the Moroccan authorities, who put the total number of deaths at 23.

According to these official reports, many of the victims fell from the top of the border fence and others were crushed in a moment of stampede.

But testimonies of witnesses and images released by the survivors allege that there were attacks by Moroccan agents on the migrants, who tried to stop them with batons, tear gas and rubber bullets.

“The Moroccan police beat us, killed our friends and I don’t understand why,” Amir, a young man from Sudan who reached Melilla, told the eldiario.es news site.

“The Moroccans beat me a lot. The repression was very strong. It has never been like this,” said Karin, another man from Sudan.

The organization Caminando Fronteras defends, for its part, that there at least 37 deceased And that number could continue to rise. There are dozens of people injured.

Now the Spanish authorities process the 133 migrants who did manage to cross the border.

Several migrants go to the Temporary Stay Center for Immigrants in Melilla after having managed to cross the fence. (GETTY IMAGES).

The Moroccan Association for Human Rights (AMHD), in the province of Nador, described as “inhumane” the way in which the detention of migrants took place.

And Moussa Faki Mahamat, president of the African Union Commissionexpressed his “shock and concern at the violent and degrading treatment of African migrants.

Shortly after the incident, AMHD posted a video on social media showing dozens of migrants stacked together on the ground near the border.

Some of the bodies lay one on top of the other and the marks of blood and pieces of clothing could be seen all around. Many of the migrants appear injured and many others show no signs of movement.

Other images released by the organization show Moroccan agents beating some of the migrants who offer no resistance.

Accounts of police brutality, a lack of sufficient detail on how it got to that point and what is seen as a rush by Morocco to start burying bodies has led more than 50 human rights organizations to call for the immediate opening of a police investigation. .

On Sunday, AMHD warned that the Moroccan authorities “intend to quickly hide the disaster we have experienced” and lamented that there is “no autopsy investigation of the bodies of the deceased.” 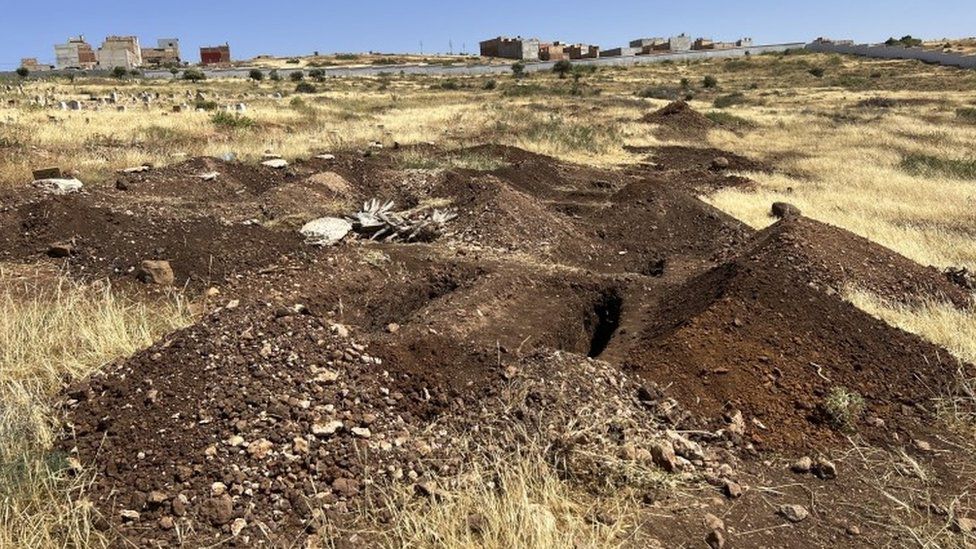 Who is held responsible?

Settle responsibilities is being one of the main points of contention several days after the tragedy.

Pedro Sánchez, president of the Spanish government, pointed out the mafias that are dedicated to human trafficking on the other side of the border as responsible.

“We regret the loss of human lives, in this case of desperate people who were looking for a better life and who are victims and instruments of mafias and criminals who organize violent actions against our border,” Sánchez said in an interview with the national media outlet La Vanguardia.

Organizations such as Caminando Fronteras, however, think that the origin lies in the “failure of migration policies security-based”.

Specifically, they attribute what happened to “campaigns of arrests, raids on camps and forced displacement against migrant communities in Nador and its region.” 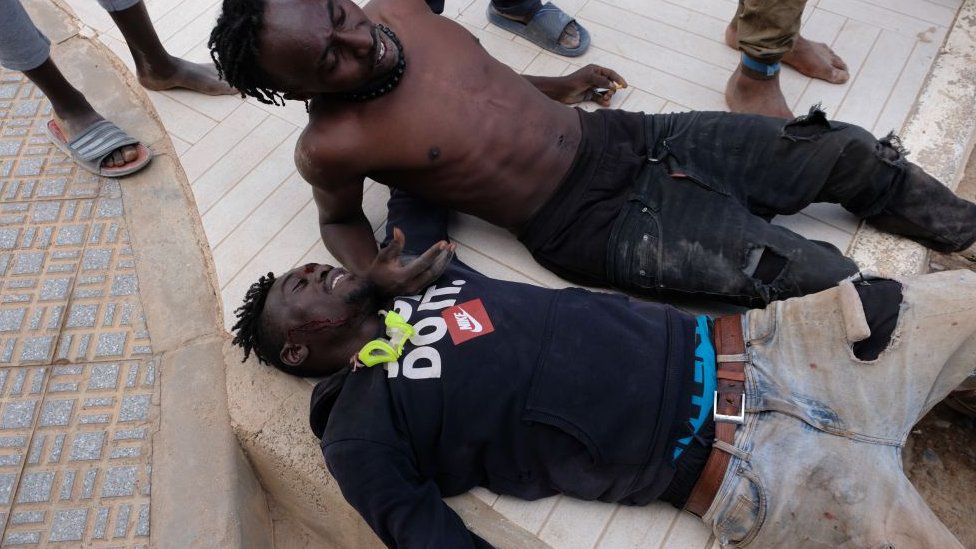 In several photos released, blood can be seen on the body of the migrants. (GETTY IMAGES).

“The resumption of cooperation on security in the field of migration between Morocco and Spain in March 2022 has had as a direct consequence the multiplication of coordinated actions between both countries,” said Caminando Fronteras in a statement.

Along the same lines, Said Tbal, Migration coordinator at the Moroccan Association for Human Rights, told the EFE Agency that although the mafias “are always there”, he believes that this latest action arose spontaneously after the latest police raids. .

On Sunday and Monday, hundreds of people protested in several Spanish cities demanding responses from the governments of Spain and Morocco in the face of what many of the outraged consider a “massacre.”

In recent years, both Ceuta and Melilla have become the target of thousands of migrantsmany of whom are fleeing armed conflict or persecution for which they could obtain refugee status.

Melilla, with 85,000 inhabitants, is surrounded by the most fortified border in the European Union. A fence 12 km long and 6 meters high separates Morocco from Spain and represents the last obstacle for those who intend to reach Europe.

Those who try to cross the border illegally do so by jumping the fence, hiding in vehicles or by sea in a boat, but not all of them succeed. 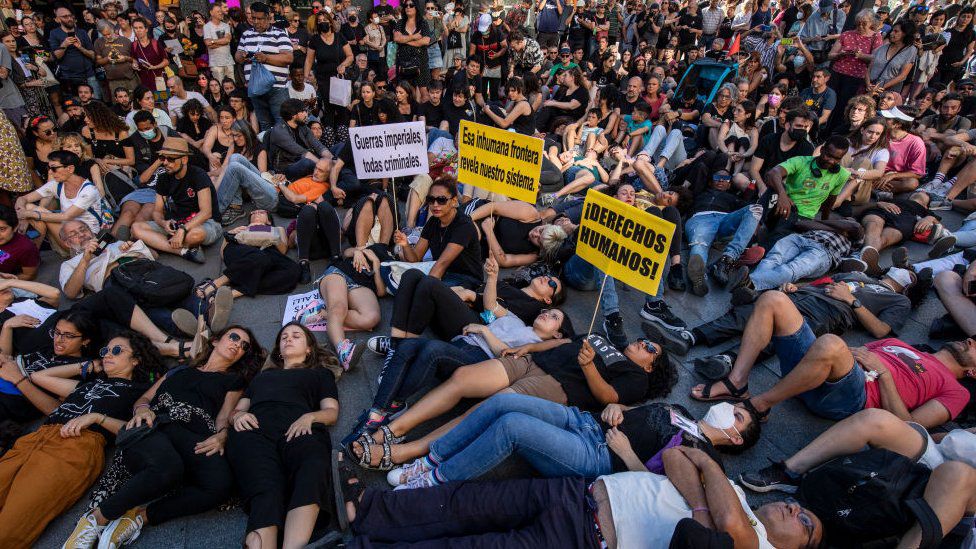 During protests in Spain this weekend, dozens of people lay on the ground imitating images of migrants stacked on the Melilla fence that have been broadcast since Friday. (GETTY IMAGES).

Migrants trying to jump risk cuts and injuries from falls as Moroccan and Spanish security forces patrol to thwart their attempts, many of which end in tragedies like the one last Friday.

The one in Nador is the first massive border crossing attempt since Spain and Morocco renewed their diplomatic relations last March after a year of hostilities.

Both countries had experienced months of tension after Spain welcomed Brahim Gali, leader of the Polisario Front, in 2021 to treat him for coronavirus. The Polisario Front and Morocco have been at odds for decades for defending different alternatives to the conflict in Western Sahara.

In an incident that Spain considered to be retaliation by Morocco, 8,000 migrants managed to cross the border of Ceuta in the spring of 2021.

Both countries shelved the months of tension last March, when Spain abandoned decades of neutrality with respect to Western Sahara and gave its approval to the Moroccan autonomy plan for this territory.

In their renewed relationship, both countries resumed their joint collaboration on border security, but incidents like the one on Friday, the worst tragedy on the borders of Ceuta and Melilla, fuel the debate on whether the efforts are being sufficient.

The most recent comparable incident occurred in 2014, when 15 immigrants drowned while trying to swim across the border fence into Ceuta. Ultimately, a judicial investigation was shelved into Spanish civil guards who had reportedly fired rubber bullets and tear gas.

The research company Yoartificial intelligence (AI) Open AI He has launched ChatGPT Plus, the paid...

Last Wednesday, David Beckham gave an entertaining interview to the sports medium ESPN. In it, the owner of...

Rosalía and her representative break their employment relationship after 6 years

rosalia and her representative, Rebeca León, broke their employment relationship amicably, after 6 years of working together, Billboard magazine...

Ancient Egypt never ceases to fascinate. A team of international researchers from the Louis Maximilian University of Munich...

The European Union is ready to take a tougher...
World