The hurricane julia It has left at least 28 dead in Central America: 14 of them in Guatemala, four in Honduras, nine in El Salvador, and thousands of victims. In the Guatemalan town of Panzós Alta Verapaz, in the north-central part of the country, five people died when they were buried by a landslide after a hillside detachment on their houses, and in the department of Huehuetenango nine people died, including a soldier who died crossing a river during rescue efforts.

Up to now, Julia’s passage through Guatemala It has left 167,000 homes with power problems and a damaged hydroelectric plant, President Alejandro Giammattei told reporters, adding that Mexico has offered to supply power to some areas.

The Guatemalan government is preparing to declare a state of calamity throughout the territory, with which it is allowed to limit constitutional guarantees such as locomotion and establish sanitary cordons, as well as centralize aid.

- Advertisement -
A man walks among fallen trees after the passage of Hurricane Julia in the city of Bluefields, on the Caribbean coast of Nicaragua. (OSWALDO RIVAS / AFP).

The government possibly using civil and military personnel to support the victims and firefighters and the Red Cross are in the affected areas supporting the evacuation of hundreds of people. The Ministry of Education canceled classes and deported flights from the United States and Mexico to the Central American country were suspended until Wednesday. 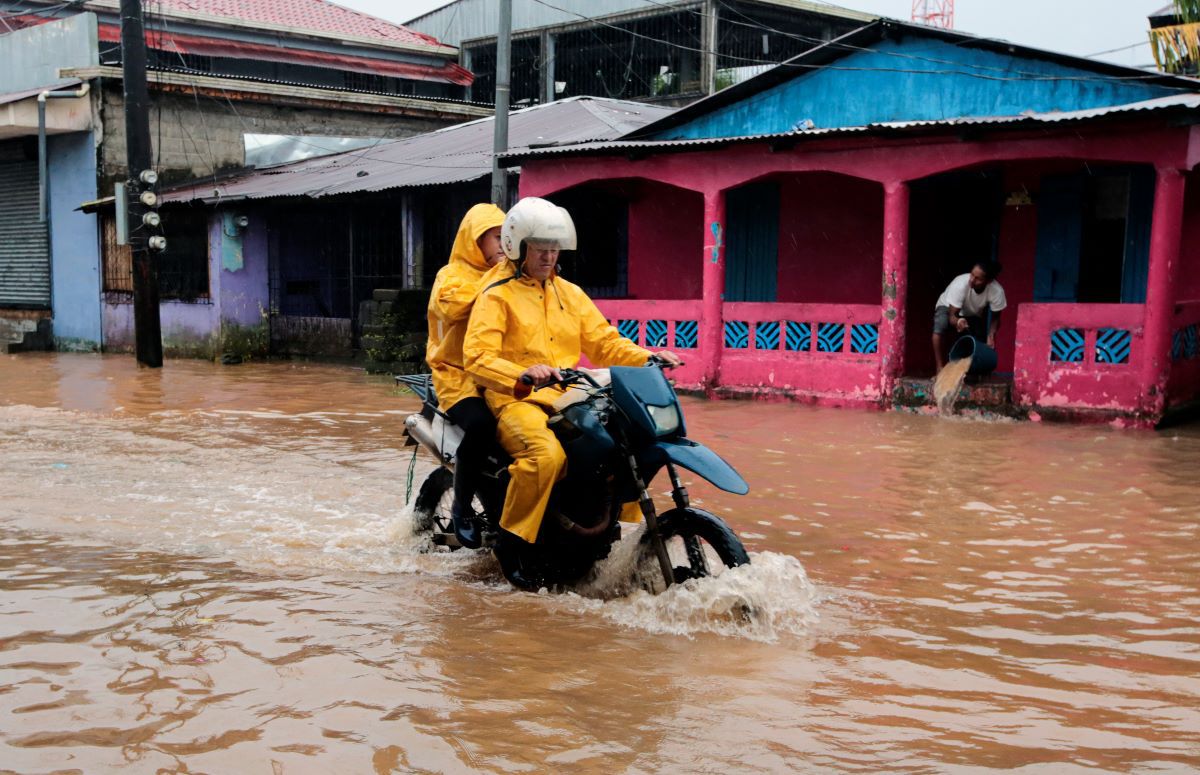 Residents ride motorcycles on a flooded street in the aftermath of Hurricane Julia in the city of Bluefields, on Nicaragua’s Caribbean coast. (OSWALDO RIVAS / AFP).

According to official data Julia, which has already been downgraded to a remnant, will cross the entire country towards southern Mexico.

In The Savior It made landfall on Sunday with heavy downpours and sustained winds of 70 kilometers per hour that caused rivers to overflow, trees to fall on highways and the streets of flooded cities to be abandoned. 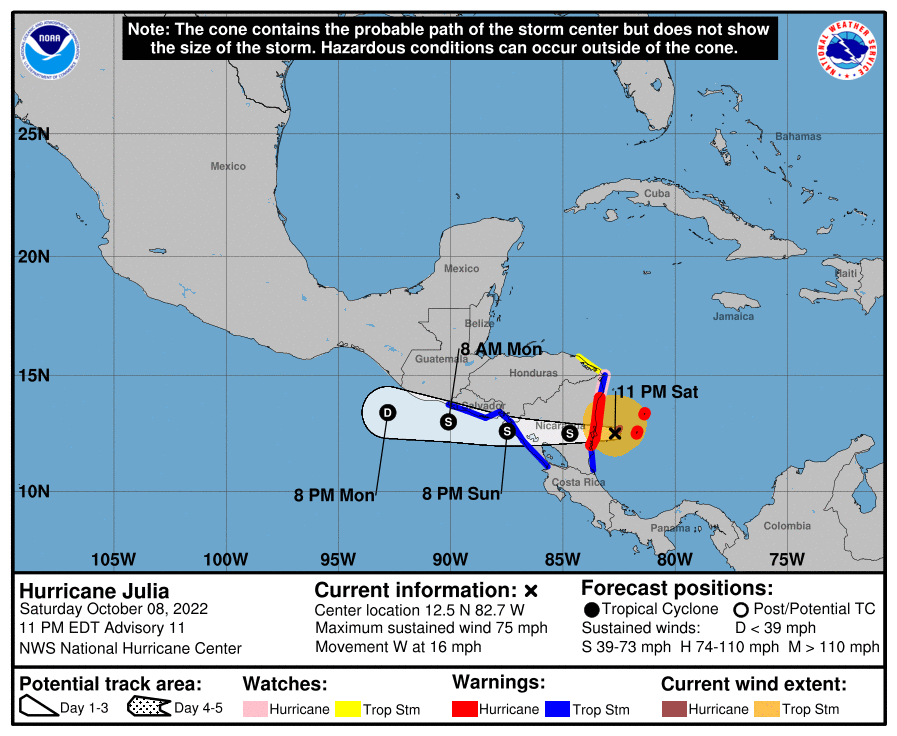 The path of Hurricane Julia.

At least five soldiers died buried when the wall of a house collapsed where they sheltered from the rain in the Municipality of Comasagua, where for a week more than 2,000 policemen and some 500 policemen have participated in a security fence to persecute gang members in the area. Another soldier was injured.

The authorities also located a dead motorcyclist who was dragged by a torrent in the municipality of AmeliaDepartment of Sonsonate. Next to the man was the motorcycle on which he was traveling.

In the Salvadoran municipality of Guatajiaguain the east of the country, two people died after the collapse of a wall that destroyed their home, granted by the National Civil Police.

Meanwhile, in a rural area of ​​the municipality of Calucowestern department of Sonsonate, a 72-year-old man died when a tree fell on his home, the director of Civil Protection, Luis Amaya, informed at a press conference. Two other people were injured in the same incident. 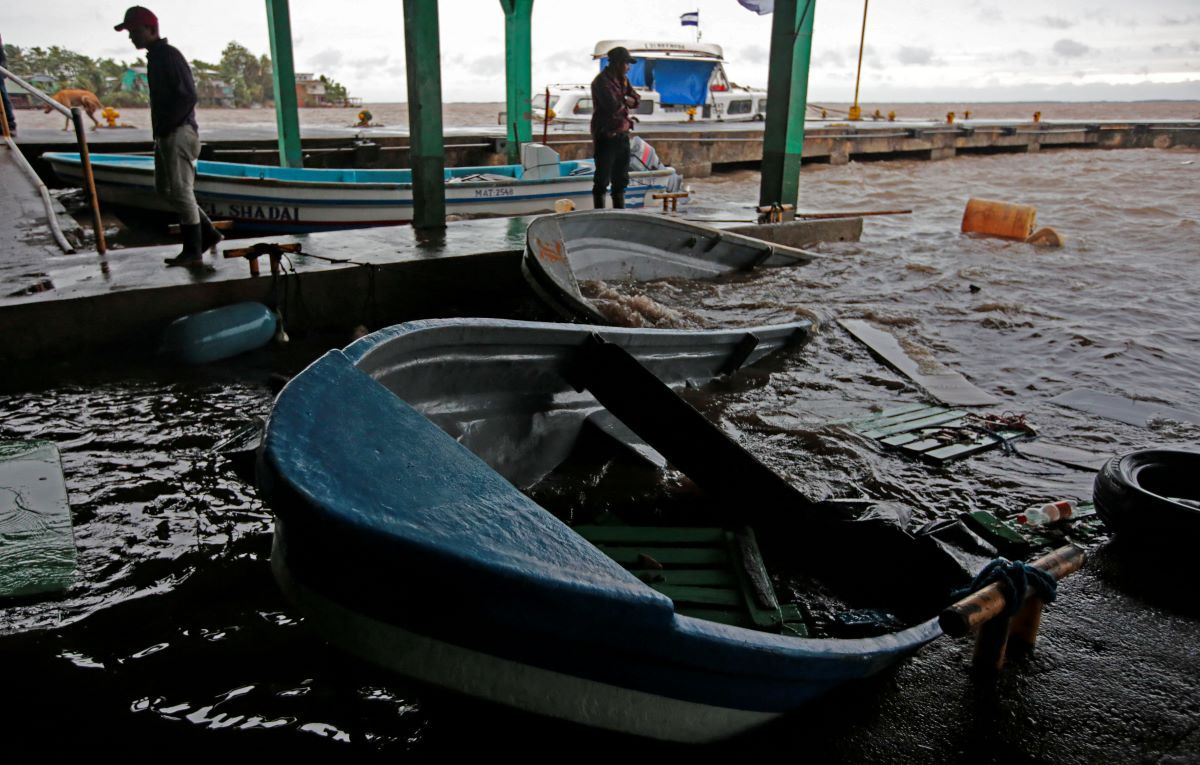 Heavy rainfall caused the overflow of the Rio Grandeone of the largest in the country, and the flooding of several houses in the Carrillo and Brisas del Río neighborhoods in the city of San Miguel, 135 kilometers from the capital, but no victims were reported because local authorities alerted them to the risk and most left the area.

The water that covered the area reached up to two meters high and the rescuers had to use small boats to evacuate some people who were left behind, and ropes to prevent the current from dragging them.

The director of shelters in El Salvador, Josué Garcia, said that 25 of the 80 shelters that have been prepared have been activated and that around 1,000 people are already receiving care in these facilities.

The salvadoran government deployed thousands of soldiers to support evacuation efforts both in the eastern part of the country and in communities in the capital. 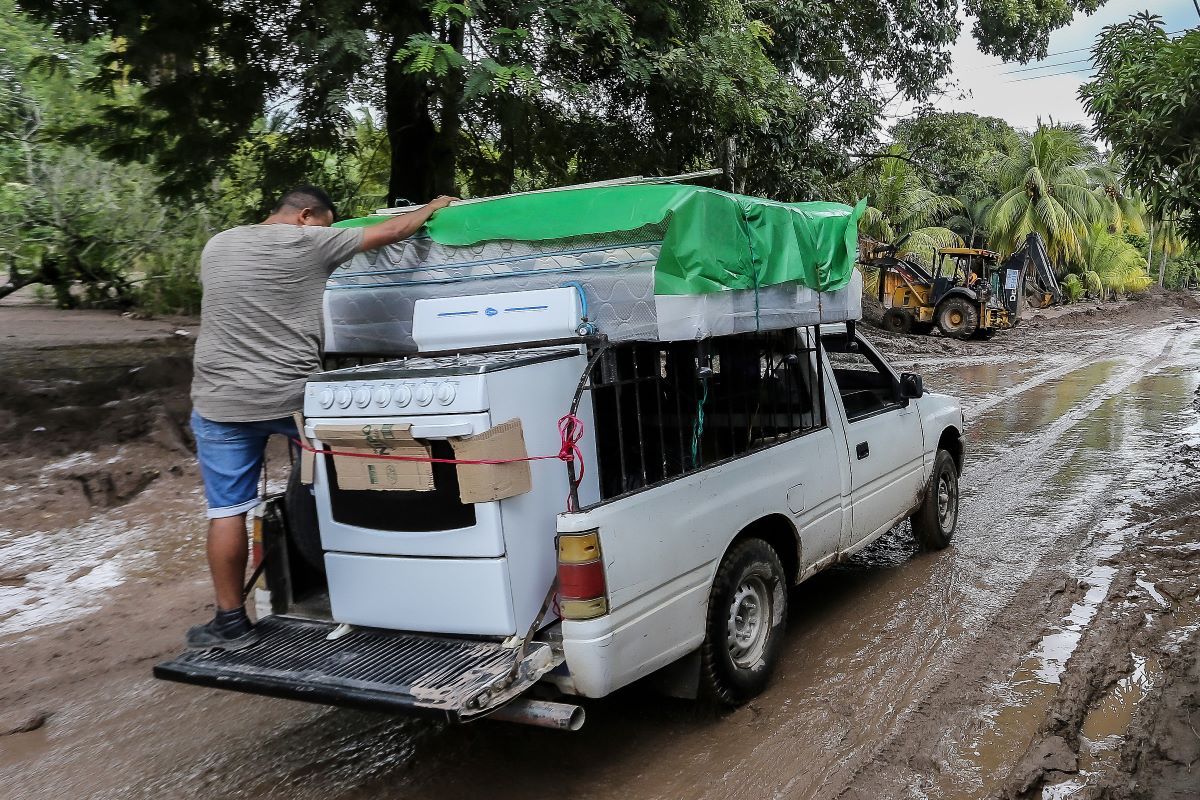 The Salvadoran Congress decreed a national state of emergency for 15 days on Saturday night and empowered Civil Protection to carry out mandatory evacuations of populations at risk.

The international Airport of the capital restricted some operations, but on Monday morning commercial flights will be active. Likewise, the Ministry of Education will include extending the suspension of classes until Tuesday.

In Hondurasfirefighters confirmed the rescue in the northern municipality of Choloma of the body of a 22-year-old woman who died on Saturday when she was swept away by the current of a river that swelled due to heavy rains. Likewise, the municipal authorities confirmed to AP the death of three people, a couple and a 4-year-old girl, when a canoe capsized in the northern municipality of Brus Laguna.

The Minister Director of Honduran Social Investment Fund, Octavio Pineda Paredes, told local media that at least 193 municipalities and 973 highway sections were affected, and that the western, southern and department of The Paradise They remain on high alert. 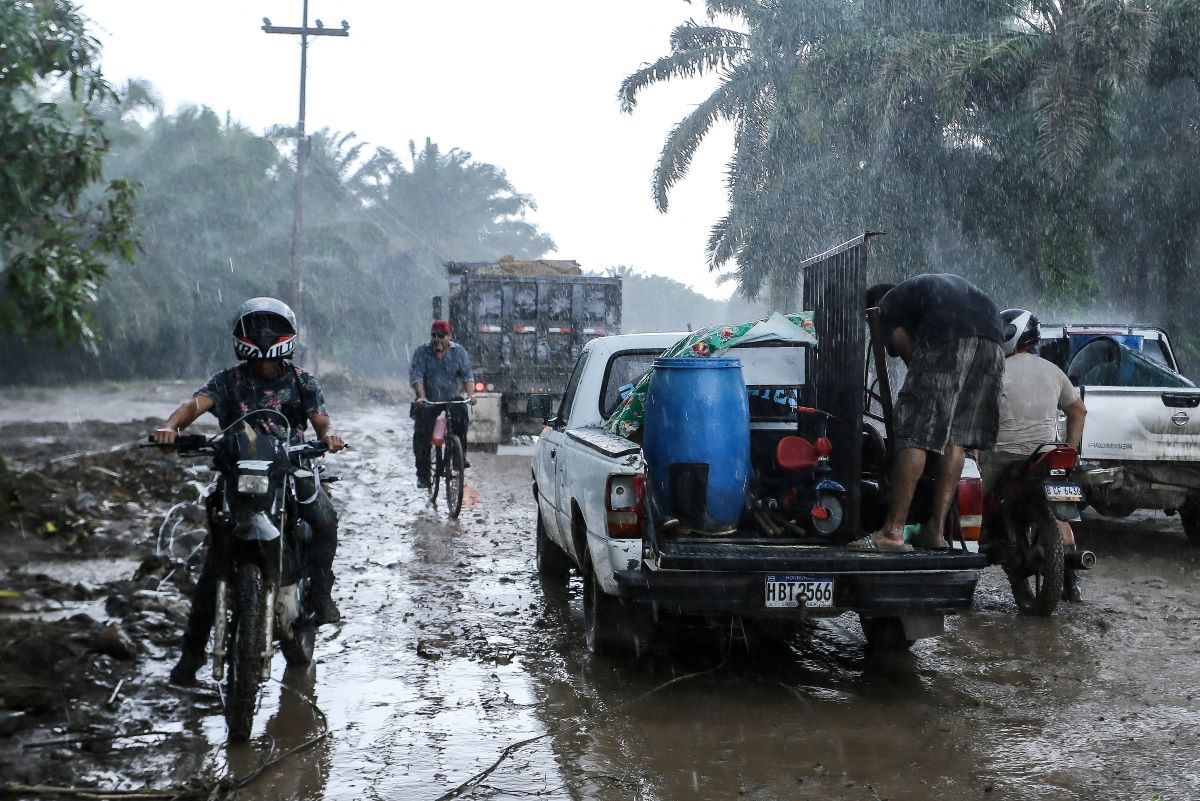 In Nicaragua Monday dawned clear and sunny in most of the affected regions, although it continued to rain in the departments of León and Chinandega, the last areas hit by Julia when leaving the national territory.

The mayor of the northern department of JinotegaLeónidas Centeno, reported that a 24-year-old man died on Sunday in the community of Las Latas when he fell on top of a tree.

The government maintains the state of red alert and for this Monday it will probably suspend classes in all public and private schools, colleges and universities. He also asked the population to take precautions due to the floods caused by the rain and the overflow of at least 78 rivers in different areas of the country.

The authorities have not offered a balance on the damage that occurred in the Caribbean town of Pearl Lagoonwhere the hurricane hit with all its force early Sunday morning and was left without power and completely cut off. 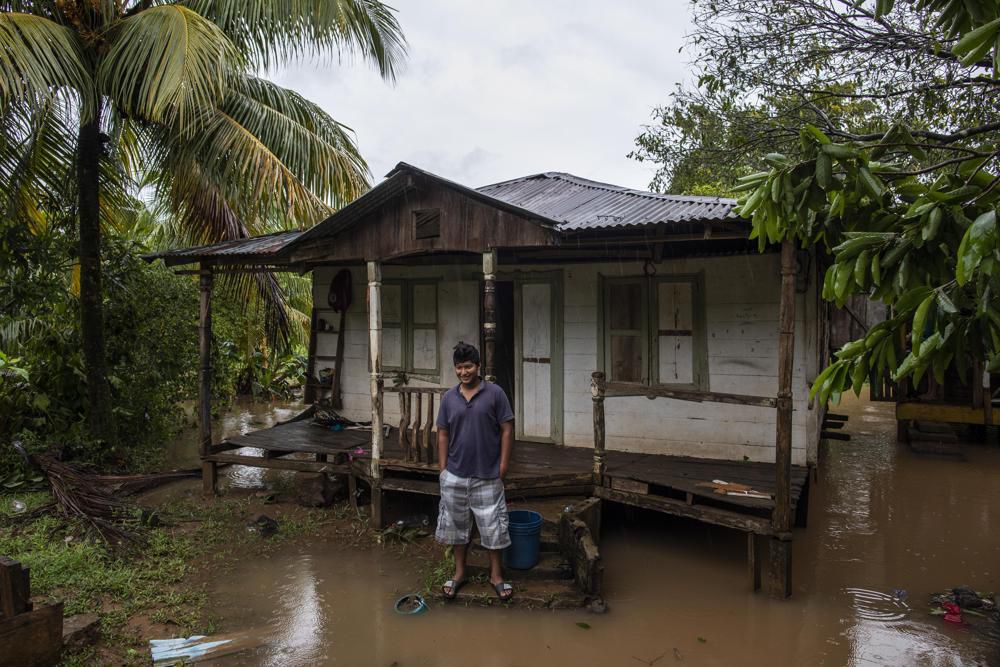 A man stands outside his home amid flooding after Hurricane Julia hit the area in Bluefields, Nicaragua, Sunday, Oct. 9, 2022. (AP Photo/Inti Ocon)

In the Caribbean town of bluefields many people woke up repairing the roofs of their homes and clearing streets covered with logs and garbage. Residents said that the city was left without power because several trees fell on the power lines and the service has not been restored so far.

During a visit to La Guajira to assess the damage, the Colombian president, Gustavo Petroexpressed concern about the breakdown of land communication, and possibly a short-term plan for the military to build bridges or alternative emergency routes.

In La Guajira close to 5,000 people were affected by the floods and a public calamity was declared in the department.

I, Ronald Payne, am a journalist and author who dedicated his life to telling the stories that need to be said. I have over 7 years of experience as a reporter and editor, covering everything from politics to business to crime.

Share
Facebook
Twitter
Pinterest
WhatsApp
Previous article
Hyperloop: this is the project that will make you travel at 1,000 km/h inside capsules
Next article
“Mr. Harrigan’s Phone”: to see or not to see the movie that leads the Netflix ranking? | REVIEW

Emile Smith Rowe will miss tonight's FA Cup fourth round match against Manchester City due to a minor training...

The argument of Ukraine to ask for war tanks is clear.He insists that they can make a difference, helping...

It didn't take long for Francis Ngannou to accept the January 22 invitation from Tyson Fury at the SecondsOut...

Decathlon, BlaBlaCar, Carrefour… which employers are considered the most committed to CSR?

As reported by Les Echos Start this Friday, January 27, French companies Decathlon, BlaBlaCar and Carrefour are the most...

The suspect in the attack on two churches in Algeciras (south), which left a sacristan dead and a priest...

John Poulos, deported by Panama, arrived in the country...
World

Selling a gun to children in the US: ‘Absolutely disgusting’, US senators condemn

US Democratic senators on Thursday strongly denounced the business...