the history of Qatar in terms of human rights has provoked protests against the celebration of the World Cup in that country since it was designated as the venue for 2022 12 years ago.

Criticism not only targeted the emirate’s position on the rights of the LGBT population (homosexuality is a crime there) and women, but also the working conditions of the foreigners who built the stadiumswhich Amnesty International considered inhumane and analogous to slavery.

The attitude of FIFA (International Federation of Associated Football), organizer of the championship, towards the absolutist monarchy that governs Qatar has also generated numerous protests.

Soccer’s supreme body usually imposes a series of rules on hosts that often conflict with their local laws.

In Qatar, however, FIFA accepted without hindrance the ban on selling alcoholic beverages in the stadiums announced by the monarchy two days before the start of the tournament, and banned the players from any type of demonstration during the matches.

This Wednesday, the German soccer players covered their mouths during the official photo of the team’s first match in protest of the sanction.

Many members of the team wanted to wear the rainbow “One Love” bracelet in support of the LGBT cause, but FIFA banned its use.

“FIFA doesn’t care about human rights; not important to business“, says soccer historian Flávio de Campos, professor of History at the University of Sao Paulo (USP) and coordinator of Ludens, an interdisciplinary center for research on this sport.

The organization, he believes, “is very pragmatic when it comes to carrying out activities and events, leaving these issues aside.”

Campos not only alludes to the World Cup in Qatar, but also to the fact that, since the first championships, FIFA has not had any problems in associate with authoritarian governments that violate human rights.

We review the history of the football entity with some of these regimes.

In 1978 Argentina was governed by a brutal military dictatorship who had come to power two years earlier through a coup.

FIFA decided to hold the World Cup in the country anyway.

“A World Cup was played while large-scale torture was practiced in Argentina,” says Flávio de Campos.

“There is no limit to what a government can do as long as money is generated, as long as the economic gear is powered.”

The political climate in the country was quite convulsive, with frequent protests from the mothers of the Plaza de Mayo, who were looking for their disappeared children.

The organization of the tournament was marked by various problems and controversies: many stadiums were not ready until the last minute and the newly planted grass fell off during the matches.

The government was also accused of favoring the Argentine national team, since, among other things, all the hosts’ matches were played in Buenos Aires while their opponents had to travel across the country.

Although the election of Argentina had taken place years before, due to the crimes of the dictatorship, the then president of FIFA, João Havelange, was pressured to move the tournament venue to EuropeSomething that did not happen.

Such an operation would not have been impossible, explains Campos, as was later demonstrated, in 1986, when Colombia resigned from hosting the World Cup and it was held in Mexico.

The 1978 championship celebration did not go without protest.

There was a strong campaign to promote a boycott of the World Cup, explains Mateus Gamba Torres, a history professor at the University of Brasilia.

“There were many international protests. Some players joined the boycott and did not go. And others who did attend participated in the demonstrations in the Plaza de Mayo,” recalls Torres.

“The Dutch team, which reached the final, announced that if they won they would not receive the cup from Videla,” explains the historian, referring to the dictator who ruled Argentina at the time.

Finally the local team won the championship and the autocrat handed over the cup. 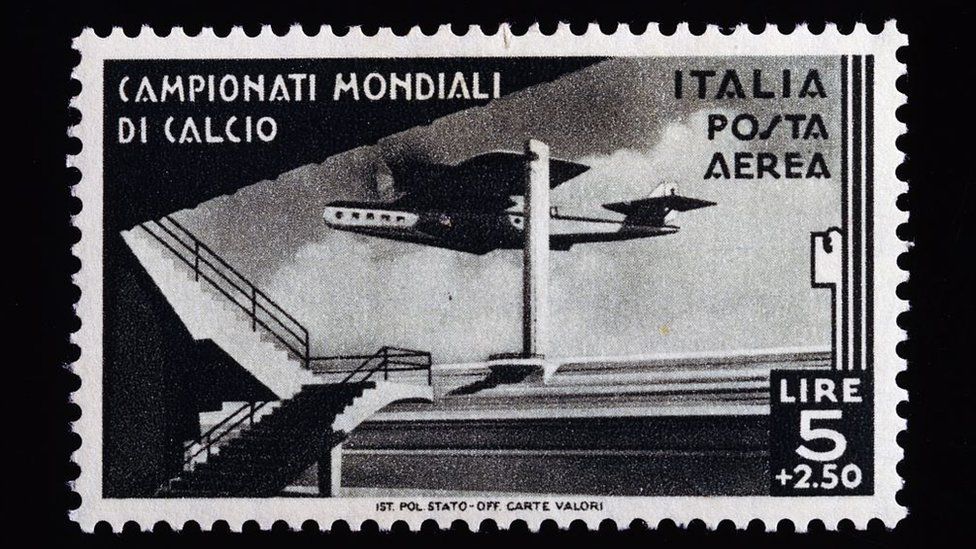 Postage stamp of the 1934 World Cup, in Italy ruled by Mussolini

The second FIFA World Cup, in 1934, was held in the Italy ruled by the fascist dictator Benito Mussolini.

Mussolini was so intent on hosting his country that he appointed a general, Giorgio Vaccaro, as president of the Italian Football Federation to negotiate with FIFA.

Vaccaro promised a large investment in the event (3.5 million lire) and in 1932 Italy defeated Sweden in the competition to host the Cup.

Campos also cites Vladimir Putin as the representative of an authoritarian government with which FIFA decided to partner to organize the World Cup, in this case Russia 2018.

Although Russia is a democracy on paper and elections are still held, “it can be considered an authoritarian government because of the myriad mechanisms of perpetuation of power created by Vladimir Putin, who has led the country (as president or prime minister) for 22 years,” says the expert.

Even in 2018, long before the international reprisals for the invasion of Ukraine, Putin’s Russia was already facing criticism for the persecution of political opponents, control of the press, the hostile environment towards the LGBT community and the use of surveillance mechanisms. and control of information, as well as accusations of interference in the US elections.

Campos also cites Vladimir Putin as the representative of an authoritarian government with which FIFA decided to partner to organize the World Cup, in this case Russia 2018.

Although Russia is a democracy on paper and elections are still held, “it can be considered an authoritarian government because of the myriad mechanisms of perpetuation of power created by Vladimir Putin, who has led the country (as president or prime minister) for 22 years,” says the expert.

Even in 2018, long before the international reprisals for the invasion of Ukraine, Putin’s Russia was already facing criticism for the persecution of political opponents, control of the press, the hostile environment towards the LGBT community and the use of surveillance mechanisms. and control of information, as well as accusations of interference in the US elections.

The celebration of World Cups in countries with autocratic governments demonstrates that the lack of democracy is not only not considered a problem, but that, according to historians, even can be seen as a positive aspect by FIFA.

FIFA itself has already admitted that it considers “too much democracy” as a “difficulty”.

“I’m going to say something that’s crazy, but less democracy is sometimes better for the organization of a World Cup,” Valcke declared at an event.

“When you have a strong head of state who can make decisions, like maybe Putin could do in 2018… it’s easier for us, the organizers,” he said.

The leader alluded to the difficulties in organizing the event in Brazil, which had protests against the Cup and a strike by workers in the construction of stadiums before the 2014 World Cup.

In Brazil “there are various people, various movements and various interests, and it is quite difficult to organize a World Cup under these conditions,” he claimed. 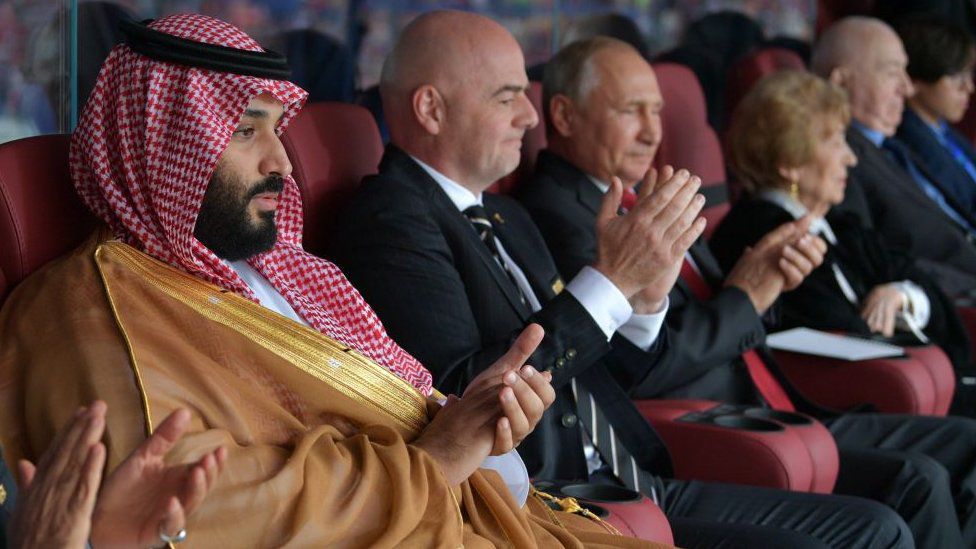 The BBC asked FIFA for comment on Valcke’s speech and criticism of his relationship with authoritarian governments, but received no response.

However, on several occasions the current FIFA president, Gianni Infantino, has responded to criticism of the entity’s position and also of the way Qatar treats migrant workers, LGBT people and women.

Infantino, who is Italian and Swiss, assured in a speech in Doha on November 19, the eve of the start of the World Cup, that you know what it is to be discriminated against because “he was bullied at school for being redheaded and having freckles.”

“Today I feel Qatari, I feel Arab. Today I feel African. I feel gay, I feel disabled. I feel like a migrant worker,” he proclaimed.

Infantino also affirmed on another occasion that organizing the World Cup in Qatar is something positive because “there have been many advances” in terms of human rights in the country thanks to the attention that the event has attracted.

Campos believes that there is an economic reason for FIFA to choose countries with authoritarian governments.

These tend to invest large sums of moneywhile in democratic countries there is usually more transparency and scrutiny about the use of public money for the event.

“Authoritarian governments spend much more money, with no one to supervise them. Just look at how much Qatar invested in 2022 (US$ 220,000 million, the most expensive World Cup in history). And in 1978 Argentina invested much more than the countries that organized the event 4 and 8 years later”, explains Mateus Gamba Torres, from the University of Brasilia (UNB).

“In an authoritarian country, everything is censored, no data is disclosed. The workers do not even consider going on strike and, if there is one, it is harshly repressed,” Torres explains.

At the same time, he points out, authoritarian regimes also pose certain risks from a business point of view.

“What a dictatorship lacks is stability and compliance with contracts,” he says. “Take for example the beer ban that Qatar announced two days before the World Cup started. This must not have gone down well with the sponsors.”

“They can say in their speeches that the human rights situation improved thanks to the World Cup, but it is hypocritical, because at no time did FIFA demand it,” says Flávio Campos.

“And by deciding to hold the event there, they legitimize the government.”

He fbi He has not found new classified documents in the search he carried out this Wednesday in a...

Can you make a movie with a smartphone? This Wednesday, February 1, the new edition of the Galaxy...

Since the interest of the real Madrid for hiring kylian mbappevarious media outlets and journalists released various versions, some...

He fbi He has not found new classified documents...
World

Ukraine: large-scale anti-corruption operation before the summit with Europe