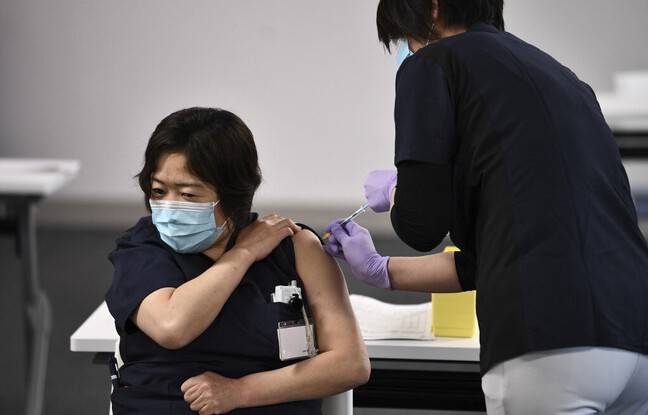 Five months before the scheduled opening of the Tokyo Olympics, postponed last year, Japan began on Wednesday the first stage of its vaccination campaign against the coronavirus, aimed first at protecting 40,000 employees of its medical sector.

The first injections of the Pfizer / BioNTech vaccine, the first to be authorized in Japan last Sunday, took place Wednesday morning at a hospital in the capital.

The director of the establishment, Kazuhiro Araki, was the first to be vaccinated, under the watch of the cameras. “The vaccine plays an important role against the coronavirus. So I thought that as a manager I had to set an example, ”Kazuhiro Araki told the press. Japan immediately plans to vaccinate on a voluntary basis 40,000 front-line health professionals in the daily fight against the coronavirus. According to local media, half of them will be asked to report any side effects or reactions to the vaccine, given as two injections three weeks apart.

The government then hopes to vaccinate all of the country’s health service personnel, or 3.7 million people, by March. Vaccination for people 65 and over should start in April at best. The government has not yet detailed the timetable for the rest of the country’s population, which numbers 126 million. “I would like many people to get vaccinated once we have an accurate understanding of the benefits and risks,” Taro Kono, the Japanese minister responsible for overseeing the national rollout of the vaccination, said on Tuesday.

The Olympics do not play on the vaccination schedule

The regulatory process for vaccine authorization in Japan has lagged behind Europe and the United States as the country requires prior additional clinical studies to be conducted on its soil. However, last year the archipelago already ordered enough vaccines from Pfizer / BioNTech, AstraZeneca and Moderna to eventually cover its entire population.

Closed to almost all foreign visitors since spring 2020, Japan has been relatively less affected by the pandemic than other regions of the world, having recorded on its territory 418,000 cases of contamination for some 7,000 deaths in the past year. If the prospect of the Tokyo Olympics, which are to be held from July 23 to August 8, shines more spotlight on the management of the health crisis in Japan, Taro Kono said Tuesday “not to take into consideration” the event for the vaccination schedule in the country.

While the eyes of the world are on Ukraine and Russia, there has been an unresolved conflict in...

This text contains slight spoilers for the movie.In the chaotic and eccentric we find beauty. That's how it...

“Don’t start…” On social media, Eduardo Camavinga responded with humor to a user who saw that he had already...

Do you like interrailing? These European countries are giving away free train tickets this summer

Summer seems far away, but it will be over before we know it. Perhaps you are planning exciting excursions and...

Emile Smith Rowe will miss tonight's FA Cup fourth round match against Manchester City due to a minor training...

While the eyes of the world are on Ukraine...
World

British tanks are expected to arrive in Ukraine by...