“It’s still under construction, during the day it’s like hell. It’s the desert, it’s too hot.”

Surprisingly, as Shogo Nakashima makes this scathing review of the place that is his home for the next two weeks, he has a smile on his face. One that says “I laugh so as not to cry”.

Look: The fans to whom Qatar offers free travel and accommodation for not criticizing the World Cup: “They are fraudulent fans”

“I can’t change where I stay right now, so I have to accept it and wait for the Japan game,” he says.

“I’ll only be here to sleep. I’ll go out and explore the city, I don’t want to stay here“.

The 31-year-old Japanese was one of the first people to arrive at the Qetaifan Island Fan Villagethe fan village just north of Doha, where construction work was still going on in some areas a few hours after the venue opened.

The entrance to the fan village on the island of Qetaifan. (BBC SPORT)

But long before most of the guests arrived on the site, there were signs that things might not be as expected.

On the long winding road to the camp there are audible and visual signs of heavy machinery. Construction cranes soar into the sky and workers are busy with jobs ranging from laying pavers to wiring lights.

And as you drive up to the reception area, the perimeter fence doesn’t exactly convey the vibe. from “premium fan camp” it says on the official page site reservations.

There are 1,800 tents, each with the capacity to house two people.

Pedro and Fatima live in Spain but are here to cheer on Mexico. They got married in April and this trip is part of their honeymoon.

“It costs around US$200 per night. To be honest, It was not what I expected. When you see the photos and read the description – and it’s a FIFA World Cup – you expect a bit of quality,” Pedro said. This is what a tent looks like inside. (BBC SPORT)

“It’s like being in a greenhouse“, he added, “so we couldn’t sleep past 9 am, even though we were exhausted from the flight.”

The tents, made of thick plastic, each contain two single beds and a nightstand with a lamp. On the floor, a thin layer of carpet is lumpy in places as it rests on sand and gravel. A single electric fan completes the layout of the room.

“no organization at all, nobody knows anything,” Fatima told BBC Sport. “Businesses are closed, there is no drinking water. This is definitely not what we paid for.”

far from a hotel

As we walk, everyone we talk to has similar thoughts. 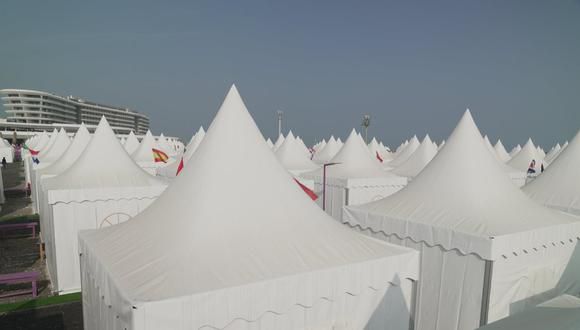 For some, the reality of the situation calls for more drastic action. Djamal, who flew in from Paris, paid about $3,000 for a three-week stay at the Fan Village, but after less than 24 hours on site he is packing his bags and heads for the exit.

“For me it’s not a good experience. There’s no shower gel, no toothbrush, no toothpaste,” he says. Djamal shared with us his booking confirmation sheet, and the fact that He thought he was going to a hotel.

One positive, albeit small, thing is that the staff here are enthusiastic, helpful and always smiling. Even if they sometimes give conflicting information, such as where and when you can buy water on site, and that you need a wristband to buy it.

A short walk from the fan village is Qetaifan Beach Fest, the fan park at the beach club. It has a large screen on which matches are projected and alcohol is sold there. 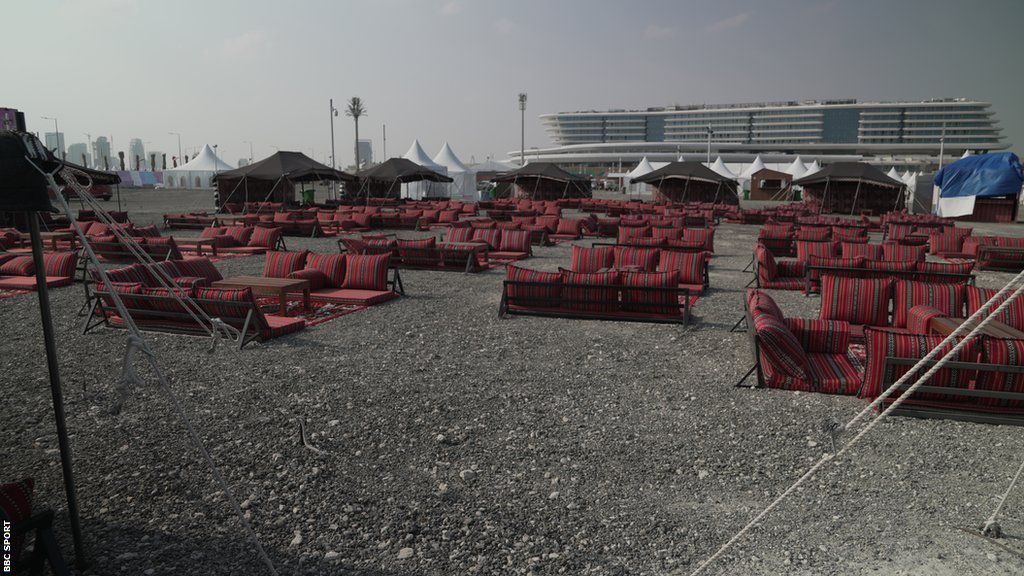 The beach club fan park is a short walk from the villa. (BBC SPORT)

The beach club was also showing signs of not being completely finished on time. Mounds of construction material were scattered around the site, and there was a constant whine of moving vehicles and the clang of structures being erected.

Since Qatar spent US$220 billion in the World Cup It cannot be questioned that his plans are not ambitious, although it is questionable how they have been carried out.

The country was awarded the biggest competition in soccer in 2010, so this last-minute rush to get ready doesn’t bode well for fans who traveled from the other side of the world and spent thousands of dollars to be here.

Share
Facebook
Twitter
Pinterest
WhatsApp
Previous article
A woman is shot to death in a restaurant in the middle of the Day against Gender Violence
Next article
Hirving Lozano sees “a great opportunity” in the duel between Mexico vs. Argentina for the Qatar 2022 World Cup

In this very dark period, Milan, having suffered a major defeat in the last three games, hail the return...