Ukraine: at least 15 dead in Kherson and 6 million homes without electricity due to Russian bombing

Russian airstrikes killed at least 15 people on Friday and forced the evacuation of hospitals in the Ukrainian city of Khersonin an offensive that in recent days left many large cities in the country without electricity, water and heating.

According to the Ukrainian president, Volodymyr Zelenskyas of Friday night there were still “more than six million” homes without electricity, despite efforts to reconnect to the grid at a time when temperatures touch zero degrees Celsius.

YOU MAY BE INTERESTED | The brutality of Russian torture in occupied Ukraine: beatings, electric shocks and staged murders

National power company Ukrenergo said late Friday that its technicians were working tirelessly to restore power, despite the grid facing a 30% deficit.

He announced that the coverage will increase over the weekend thanks to the incorporation of more nuclear energy.

The bombardments on Friday continued to crush Kherson (south), the first major city to fall into Russian hands after the invasion on February 24, but recaptured by the Ukrainians on November 11, in the last major setback of the Russian president’s offensive, Vladimir Putin.

Ukrainian soldiers walk past a destroyed building of the Kherson International Airport in the village of Chornobaivka, on the outskirts of Kherson, on November 20, 2022, amid the Russian invasion of Ukraine. (Photo by BULENT KILIC / AFP) (BULENT KILIC /)

“Today 15 inhabitants of the city of Kherson died and 35 were injured, including a child, due to the shelling of the enemy”, said Galyna Lugovaa local military administration official, on social media.

The “constants” Russian attacks also forced the evacuation of hospitals in the city, he added.

Another bombardment had already caused 11 deaths and almost 50 injuries on Thursday night in this town.

MORE INFORMATION | Ukraine announces the discovery of “torture chambers” in Kherson: there were bullets, a bat and an electrocution device

More than 6 million homes without electricity

“Tonight, there are blackouts in most regions [de Ucrania] and in kyiv”, the capital, indicated the president in his daily report on social networks.

Zelensky denounced the strategy of destroying infrastructure at a time when temperatures drop due to the arrival of winter as a “crime against humanity” and his Western allies defined it as “war crimes.”

“We have to endure this winter, a winter that the whole world will remember,” Zelensky said.

Russia assures that it only targets military infrastructures and accuses the Ukrainian anti-aircraft defense of the blackouts. 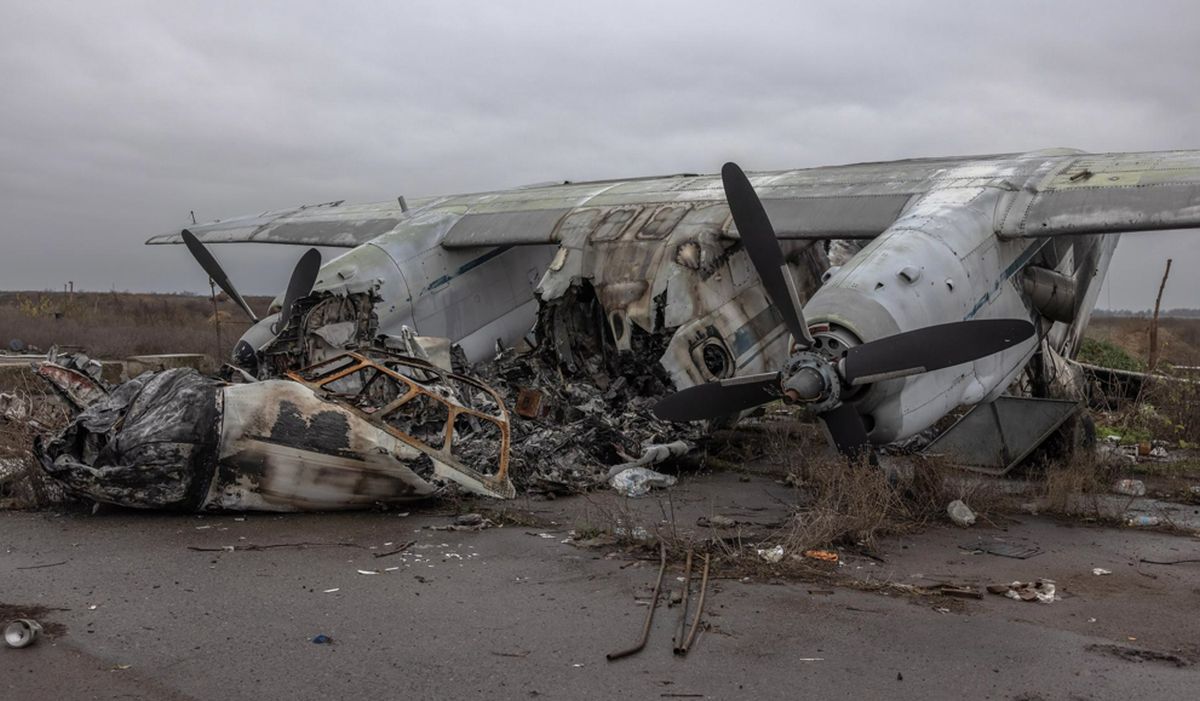 A destroyed Antonov An-24 transport plane at the international airport, after Russian troops withdrew from Kherson, in the village of Chornobaivka, on the outskirts of Kherson, in southern Ukraine, on November 24, 2022 ( Photo: EFE/EPA/ROMAN PILIPEY)

“This is our life”

After the shelling on Wednesday, Ukrainian engineers continue to repair the damage.

“A third of kyiv homes already have heating”, indicated the mayor of the capital, Vitali Klitschko. Meanwhile, “Half of the users are still without electricity”, added.

Albina Bilogub, a neighbor who was left without gas or heating, explained that her children were sleeping together in the same room to stay warm.

“This is our life. A sweater, another sweater and another one. This is how we live now.” counted.

The president of the board of directors of the national electricity operator, Ukrenergo, Volodimir Kudrisky, He considered that the Ukrainian energy system had “passed the most difficult moment” after the attack.

Electricity was partially restored and “the energy system is reconnected” to that of the European Union, he reported.

In neighborhoods of the capital, the mobile phone network was still not working well.

Western powers provided Ukraine with air defense systems, but these may prove insufficient.

The British Foreign Secretary, James Cleverley, announced further aid during a visit to kyiv on Friday. She also offered support to “survivors of sexual violence perpetrated by the Russian army.”

France and Germany “will support Ukraine” until the conflict is over, the French Prime Minister said for her part, Elisabeth Terminalafter meeting in Berlin with the head of the German government, Olaf Schölz.

So far there are no signs that the conflict could end anytime soon.

Putin proclaimed on Friday that Russia will “achieve its goals” in Ukraine and denounced “enemies of the information area” who seek to “depreciate, discredit” the Russian military operation.

The president made these statements when meeting for the first time with a group of mothers of Russian soldiers killed in Ukraine, to whom he told them that he shared their “pain.”

Share
Facebook
Twitter
Pinterest
WhatsApp
Previous article
What does Mexico need to qualify for the round of 16 in Qatar 2022?
Next article
Xi Jinping conveys to Kim Jong-un his desire to strengthen bilateral ties between China and North Korea