in a corner of Qatarthat small peninsula attached to Saudi Arabia, there is a place often described as a “natural treasure” whose name is not only charming, but also has an exciting history: the Purple Island.

Today it is highly prized for remaining green all year in a country that registers less than 71mm of annual rainfall.

LOOK: The fans to whom Qatar offers free travel and accommodation for not criticizing the World Cup: “They are fraudulent fans”

It is completely surrounded by mangroves, and is home to a wide variety of birds, including flamingos, and marine animals, as well as small beaches and natural salt ponds.

But it’s also home to some fascinating ruins, as well as the remains of some molluscs that gave it its name around 2000 BC and were the origin of a fascinating industry.

They were small sea snails with which one of the oldest, most expensive, prestigious and most vivid color dyes was produced.

In fact, the Purple Island, to date, is the oldest known site of production of that magnificent color.

Is he royal or imperial purplewhich is known as Tyrian purplea Phoenician city -today Lebanese- that became the center of the dye industry.

The purple-dyed cloth of Tire made the Phoenicians famous; some historians claim that the name Phoenicia means “land of purple.”

They exported it to their colonies, particularly Carthage, from where its popularity spread and it was adopted by the Romans as a symbol of authority and imperial status.

That purple, however, was a paradox, a contradiction made color.

Associated with royalty, exuberance, and the elevation of intellectual and spiritual ideals, for many millennia it was distilled from a gland found just behind the rectum of spiny sea snails.

Not only was its provenance not the noblest, but it was notoriously smelly: though it symbolized a higher order, it reeked of a lower filth.

Tens of thousands of dissected hypobranchial glands were needed, torn from the calcified coils of cañadilla sea snails (Bolinus brandaris) crushed and rotten that were left to cook in the sun to color a small sample of cloth.

The process, moreover, was laborious and took at least two weeks to complete, as detailed by the Roman author Pliny the Elder in his “Natural History.”

The fibers, long after being dyed, they held back the stench from the excretions of marine invertebrates. 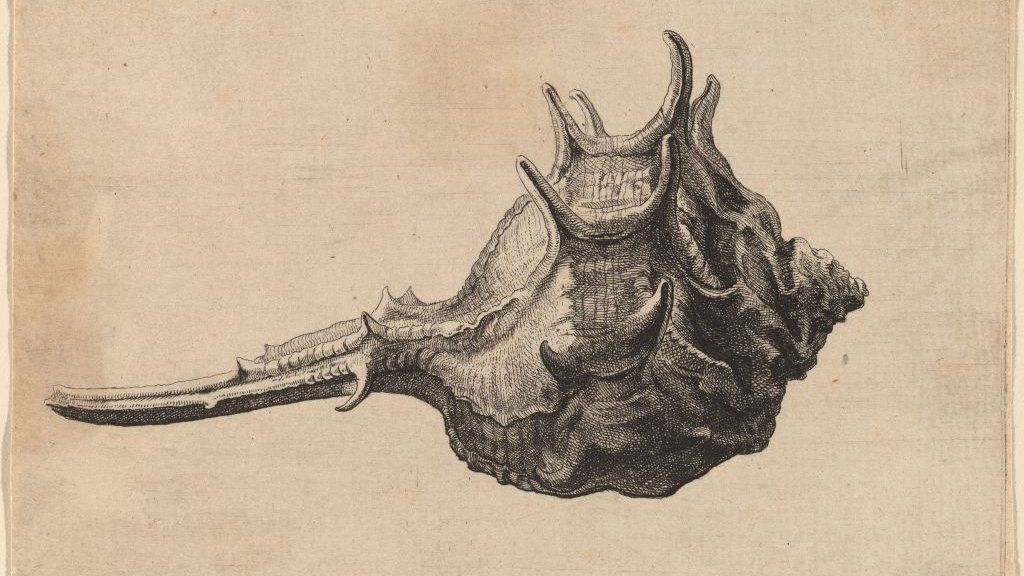 But unlike other textile colors whose brilliance quickly faded, Tyrian purple intensified weathered and worn, a miraculous quality that meant an exorbitant price.

A price edict from AD 301 in the reign of the Roman Emperor Diocletian says that a pound of purple dye cost 150,000 denarii or about three pounds of gold (that would be about $85,000 based on today’s gold prices!)

The demigod and the nymph

Such a precious color must have had a legend in keeping with the lineage of those who could afford to wear it.

And the second-century Greek grammarian Julius Pollux gave it to him.

In his “Onomastic” he recounted that one day the demigod Heracles (the Roman god Hercules) he was walking along the seashore with a beautiful nymph he was courting when his dog began to gnaw on a rotten snail.

When the nymph saw the purple-stained muzzle of the hound, she asked the great hero to I will give you a garment of that beautiful color. 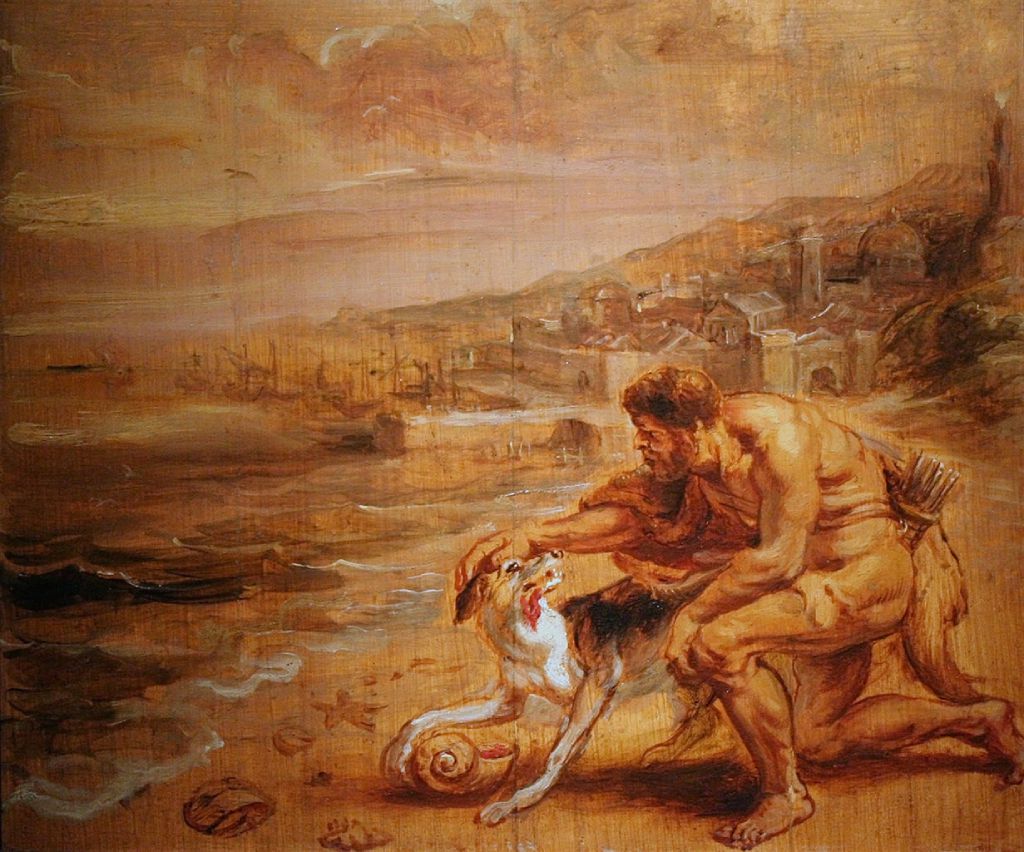 "The discovery of purple by Hercules’s dog"by the Flemish artist Peter Paul Rubens, circa 1636.

By the time Pollux penned that legend, purple had been a symbol of majesty and enduring power in ancient Greece for centuries, though this was not always the case.

In the 5th century BC, the Greeks considered expensive clothing to be barbaric and not in keeping with their identity.

Furthermore, the color was associated with the Persian monarchs who wore it and who had become symbol of tyranny and decadence after the Greco-Persian Wars (492-449 BC).

But the phobia of purple was overcome and, in the middle of the following century, its popularity began to increase, which led to an expansion in the number of production sites in the Mediterranean.

Over time, the right to wear purple began to be strictly controlled by legislation. The higher the social and political rank, the more blankets of that color the dignitaries could wrap themselves with.

Cleopatra loved it, and when Julius Caesar traveled to Egypt to visit her court, he was so fascinated by the shades of purple he saw that he returned home wearing a purple toga and decreed that only he could wear that color. 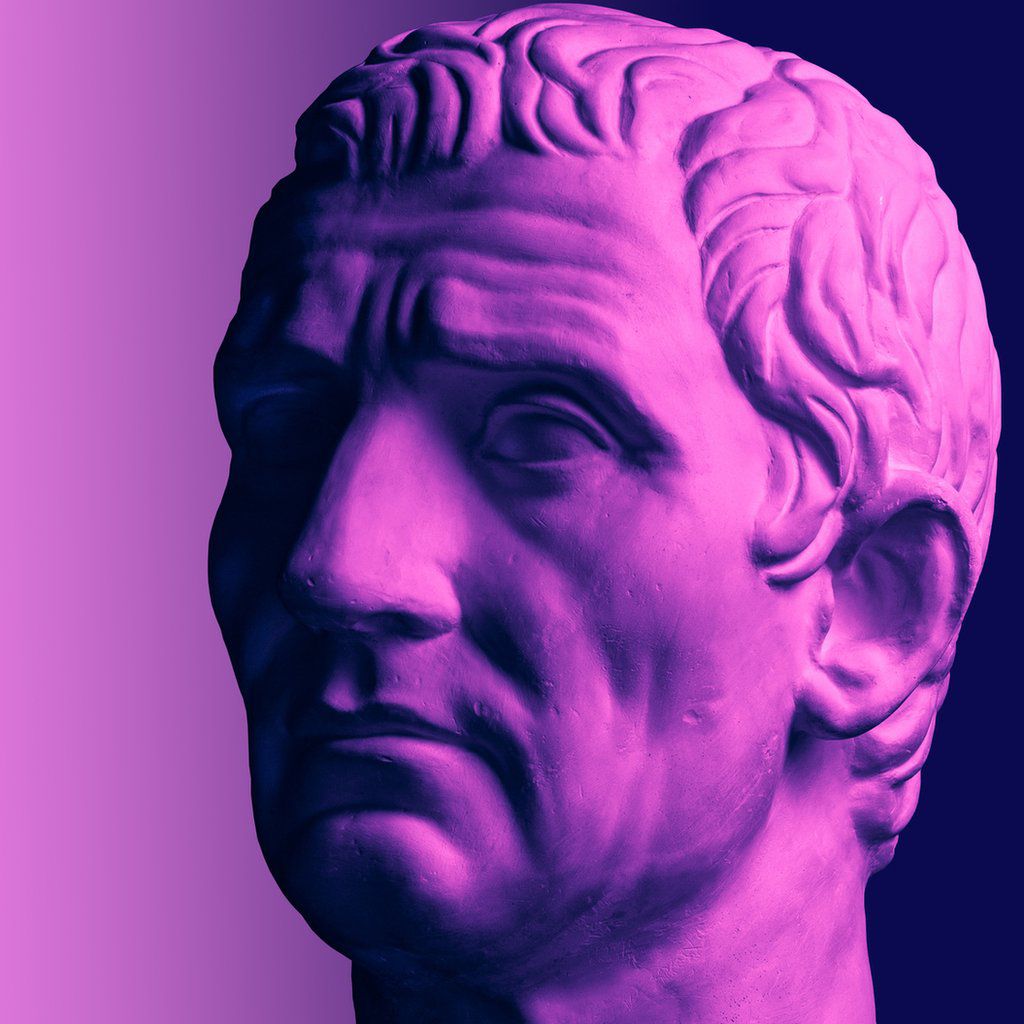 A few years after he was assassinated, Pliny the Elder wrote about purple.

“It is by this color that the fasces and the segures of Rome make their way in the crowd; it is this that affirms the majesty of childhood; this is what distinguishes the senator from the man of equestrian rank; by persons attired in this color prayers are directed to appease the gods; it enhances any garment, and in the triumphal garment it is seen mixed with gold”.

But you had to use it carefully.

King Ptolemy of Mauretania’s decision to wear purple on a visit to Emperor Caligula it cost him his lifeaccording to the Roman historian Suetonius.

When, in AD 40, he entered the amphitheater during a gladiator show dressed in a fine cloak of that color that attracted everyone’s admiration, Caligula interpreted the gesture as an act of imperial aggression and had his guest killed.

That the color purple caused bloodshed is reminiscent of a curious fact: the more it resembled the deep red hue of congealed blood, the more precious it was, supposedly having divine connotations.

And it turns out that the famous purple of Tire was not an exact color. 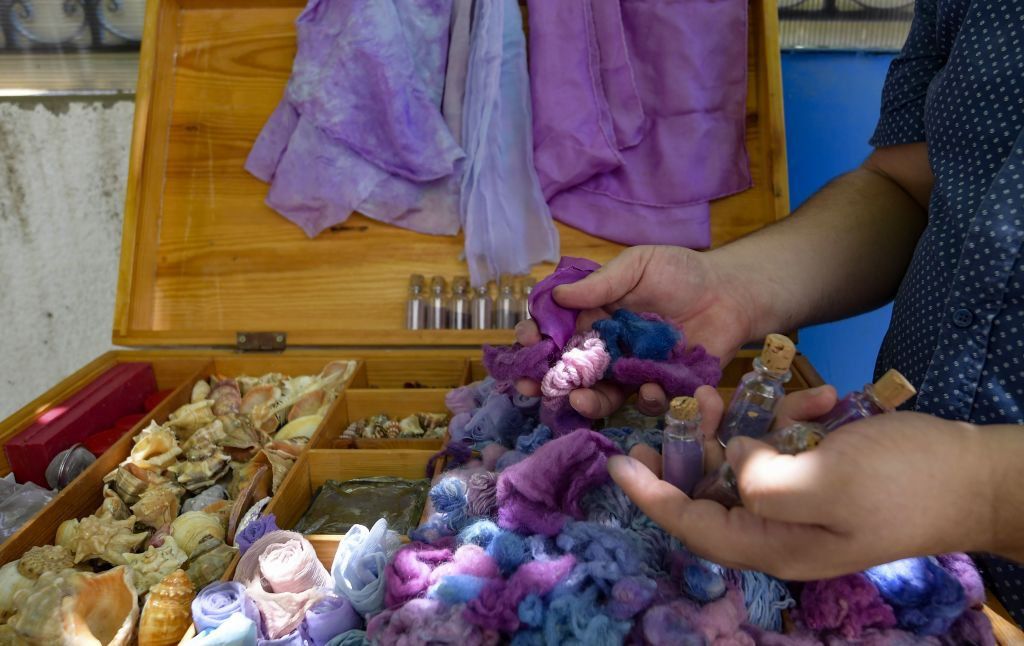 Threads and fabrics dyed in the purple color extracted from snails by the Tunisian artisan Mohamed Ghassen Nouira, who in 2020 set out to revive the trade. (GETTY IMAGES).

It varied significantly depending on where the snails came from, the mordant used, and even what time of day it dried.

As the Roman Vitruvius details in his work “De architecture”, when speaking of color “which among all is the most appreciated, excellent and charming”, in the regions closest to the north “it is black“, to the west, “gunmetal blue“, while “in the quinoctial regions, east and west it is colored purple. But in the southern regions it has a character red“, for being “closer to the Sun”.

In short, it was usually any shade between pale mauve and purplish black. But whatever its hue, its importance in the ancient world was such that it appears not only in Homer’s Odyssey and Iliad, but even in the Bible. According to the Gospel of Mark, for example, Christ’s torturers tormented him in purple robes, to mock his status as ‘King of the Jews’.

Given their value, dry cleaners were a good source of income for rulers, either to collect taxes or to seize them. 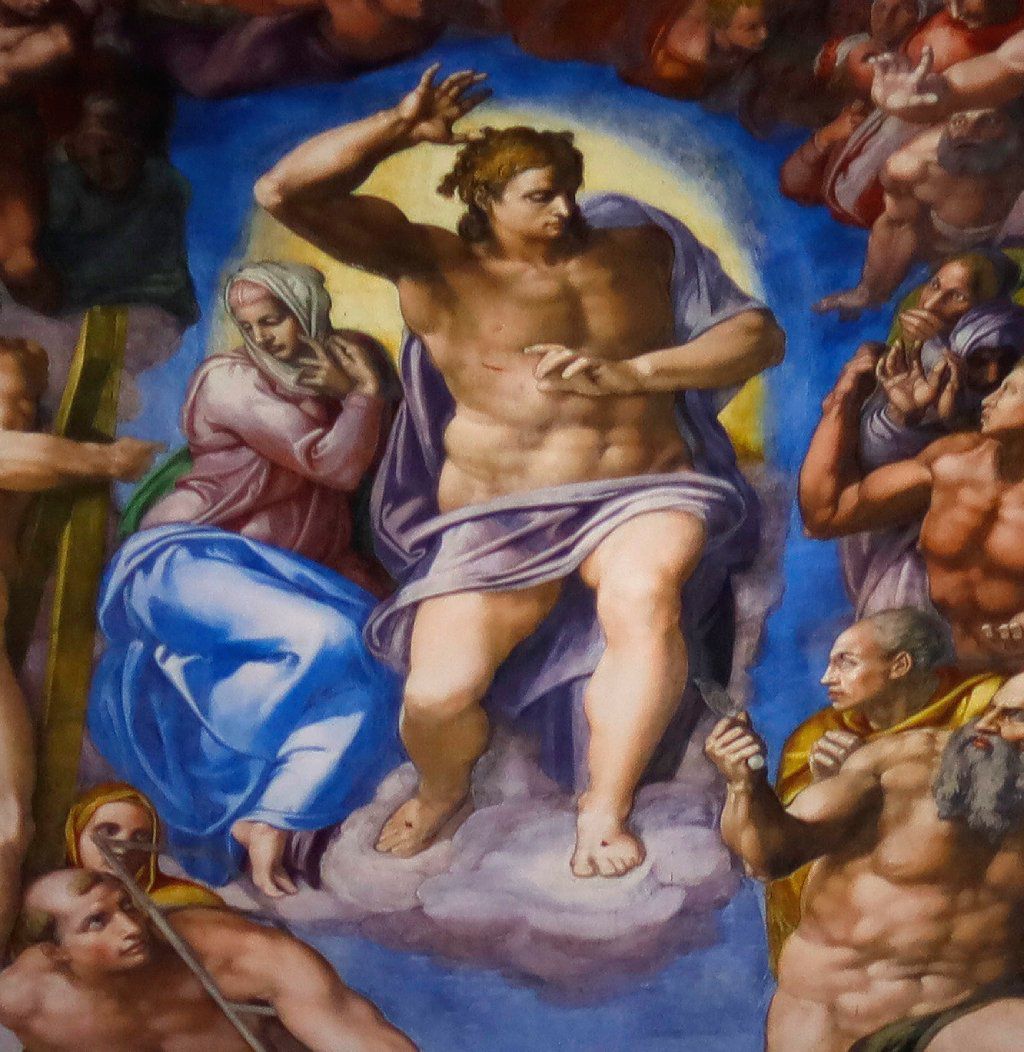 Tire purple in the Last Judgment in the Sistine Chapel of the Vatican (Created by Michelangelo between 1526 and 1541). / GETTY IMAGES.

When the Roman Empire began to decline and the legendary city of Tire was taken over by the Arabs, the imperial dry cleaners moved to Constantinople.

Upon conversion to Christianity, purple was used to denote high priestly rank until, in 1453, Sultan Mehmet II conquered the city.

Deprived of purple and its income, Pope Paul II decreed in 1464 that the dye be replaced by the also expensive crimson which was produced with the kermes insect and an alum mordant, whose mines in Italy were controlled by him.

The exact knowledge of the elaboration of the purple of Tire was lost, to the fortune of the snails that were on the verge of extinction.

However, it had already taken deep roots and continued to be the color of royalty, and the one with which the great masters exquisitely dyed the garments of human or divine beings in their works.

In 1856, an 18-year-old British aspiring chemist, British William Henry Perkin, accidentally discovered, while trying to find a cure for malaria, an artificial residue that could rival the brilliance of Tyrian purple.

It was the first synthetic dye in history: Perkin’s aniline purple, malvein, mauve, violet or purple.

Again, purple became the most prized color, but this time not so much for its monetary value, but because triggered a revolution.

Not only was it the beginning of the entire modern chemical industry, but it made a rainbow of color available to everyone for the first time.

If you’re curious about that story, we tell you here.

He Pope Francisco condemned on Wednesday in kinshasa "cruel...
World

France: bill seeks to speed up the expulsions of the undocumented

He french government adopted this Wednesday a bill which...