The landslide on the island Italian of Ischia (south) left at least seven dead, five missing and hundreds displaced, while revealing the need for a plan that limits geological risks and prevents construction in threatened places, as in this case, due to the climate crisis.

The emergency teams have recovered today from the mud the bodies of six people, among them that of three children, one of only 23 days, while on Saturday the first victim was found, a 31-year-old woman who lived in the place.

Look: Italy: Two sentenced for the death of an enslaved immigrant laborer

The search for five missing persons continues relentlessly with all the means at their disposal, with sniffer dogs, by air and even digging with their hands, although the desire for some “miracle” evaporates as the hours go by.

The tragedy occurred in the early hours of Saturday, when a waterspout (130 millimeters in six hours) fell on this volcanic vacation island facing the Gulf of Naples, causing a landslide and rocks that hit the municipality of Casamicciola, in its north face.

A day later, some 230 residents are still displaced and another twenty are waiting to be rescued in their homes without water or electricity.

A damaged car lies in the rubble after a landslide on the Italian holiday island of Ischia, Italy. (REUTERS/Guglielmo Mangiapane/)

AN URGENT PLAN FOR A THREATENED COUNTRY

It is not the first time that the island has suffered such a blow: a landslide in Casmicciola caused one death in 2009 and an earthquake in 2017 caused the death of two people.

But, in turn, this latest landslide has meant a new and sad episode in the long series of natural disasters that have shaken Italy in 2022, such as the collapse of the Marmolada alpine glacier in July or the Marche flood in September.

Italy is a country threatened by its very geography: it has highly seismic areas, as well as the most active volcano in Europe, Etna, and numerous towns and cities dot its orography, at the foot of some Alps that see their glaciers collapse due to the increase in temperatures or along the Apennines.

A recent report from the Union of Mountainous Municipalities (UNCEM) warns that there are 2,902 localities subject to high or medium-high seismic activity, 36.3% of the total, while high risk affects 707 towns and cities ( 8.8%).

Regarding the hydrogeological threat, 63.9% of its municipalities have at least part of their territory in a mountainous area that could cause landslides, while the risk in the Apennines affects 99.2% of its towns. 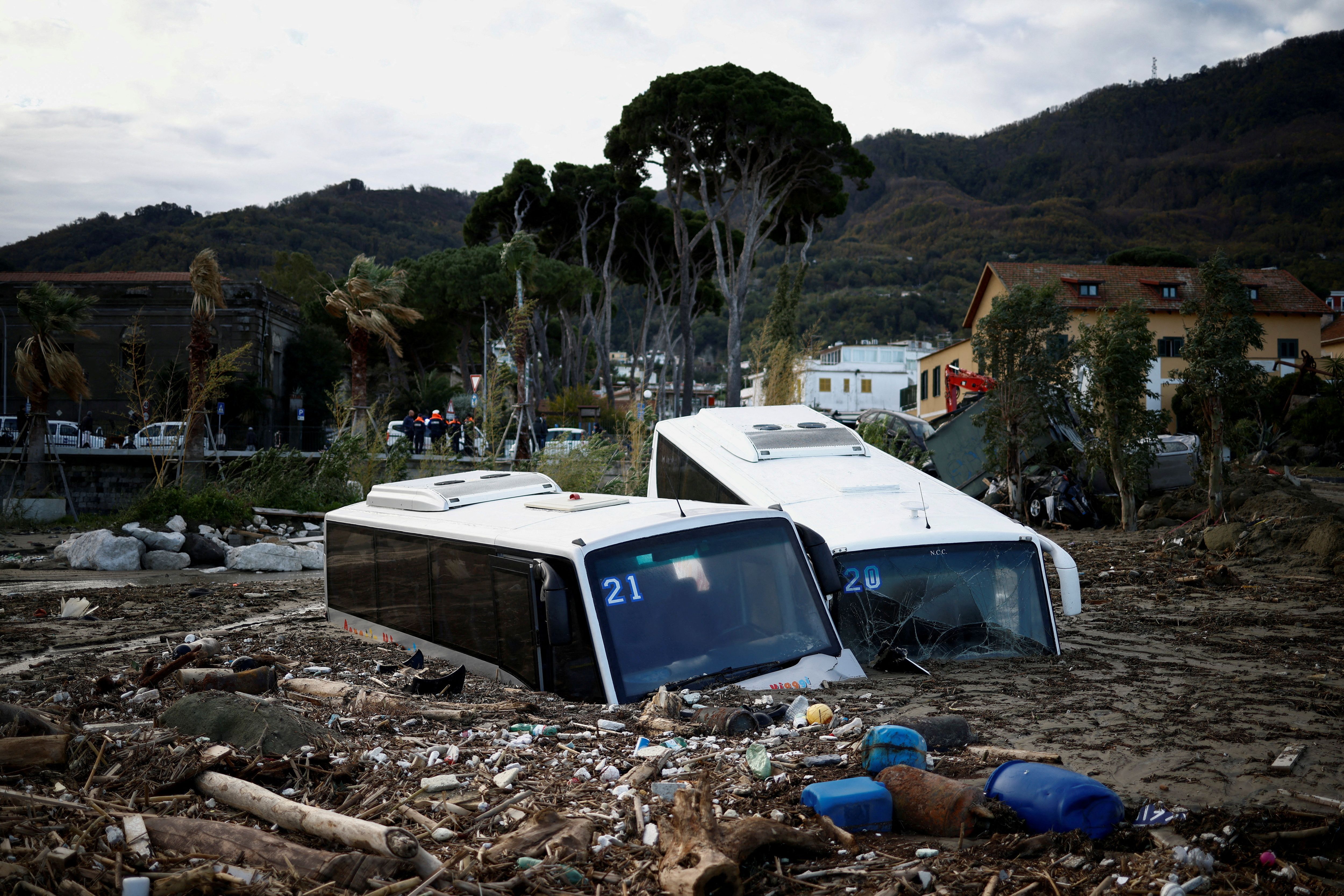 Damaged buses lie among the rubble after a landslide on the Italian holiday island of Ischia, Italy. (REUTERS/Guglielmo Mangiapane /)

The Government of Giorgia Meloni declared a state of emergency on the island and announced aid for two million euros but left another important commitment in writing: to approve the “National Plan for Adaptation to Climate Change” in the remainder of the year.

This is a document that precisely establishes the most dangerous areas in Italy from this point of view, but it has not yet been approved, despite having been presented in 2018 as a key tool to prevent this type of tragedy.

“We will not be able to do prevention without foresight. Our territory suffers from a lack of planning and the reports are still in the drawers”, lamented the Minister of Civil Protection, Nello Musumeci.

WHAT WERE THESE HOUSES DOING THERE?

After the first day of stupor, in Italy the most repeated question is what those houses were doing on top of a volcanic island. In fact, Ischia, famous for its hot springs, is another example of the more than frequent irregular or “abusive” urbanization in the country.

Currently, a third of its 60,000 residents have requested amnesty for their houses built where they should not, thanks to three cancellations, the last in 2018 provided by the Government of Giuseppe Conte, according to the Legambente association. 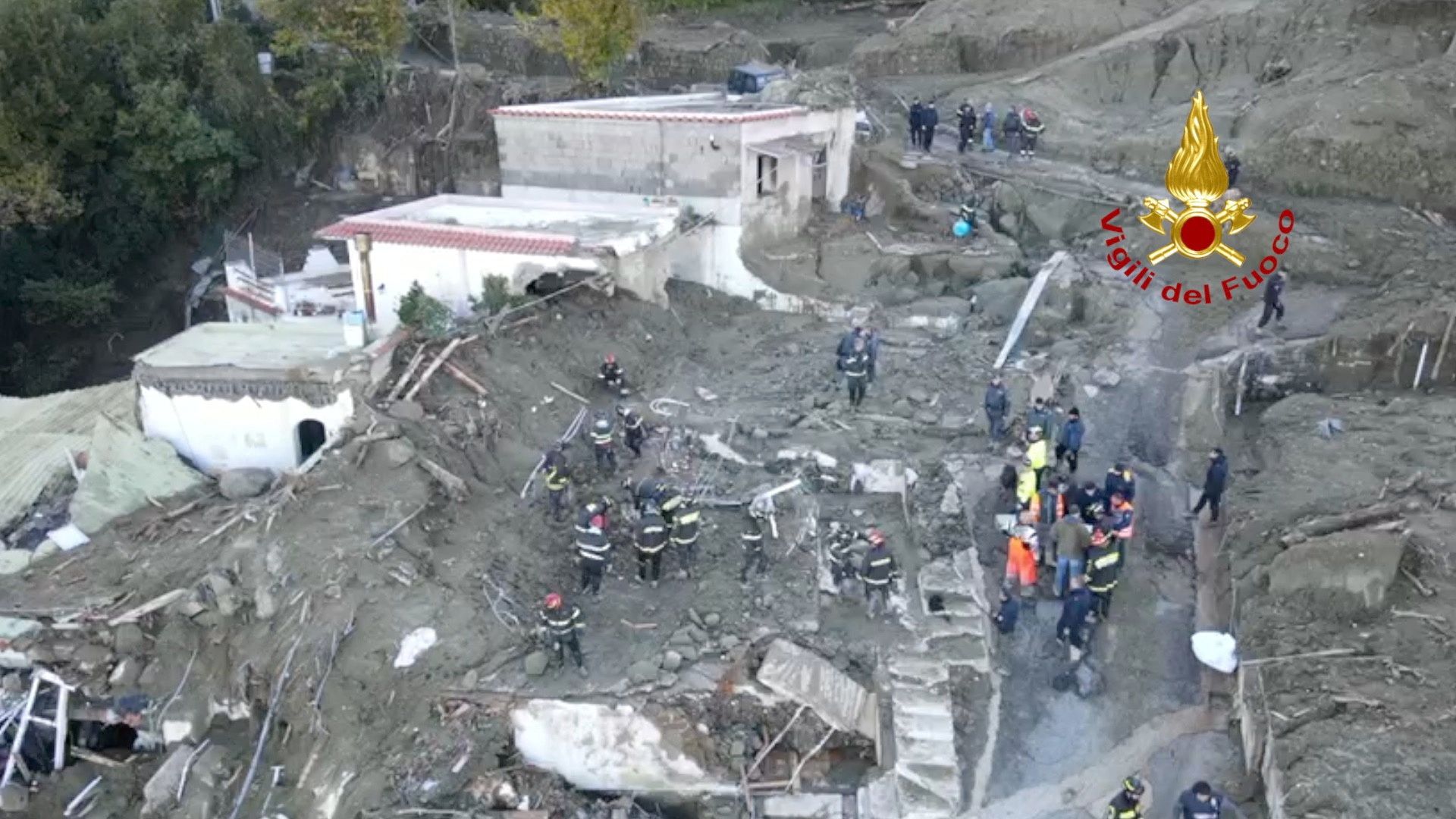 An aerial view shows rescuers searching for missing people after a landslide on the Italian island of Ischia, Italy. (Vigili del Fuoco/Handout via REUTERS /)

The leader of the 5 Star Movement, who at that time was governing with the League of Matteo Salvini, current vice president, immediately defended himself by pointing out that his provision “was not a cancellation but a simplification” of these procedures.

The director of the Institute for Hydrogeological Protection Research, Tommaso Moramarco, denounced on public television that, beyond the severity of the flood, many of the destroyed houses were in the natural path of the avalanche.

While the president of the Campania region -to which the island belongs-, Vincenzo De Luca, was clear in warning that “people must understand that in some areas you cannot live.”

“Constructions in fragile areas from the hydrogeological point of view have to be demolished,” he said. 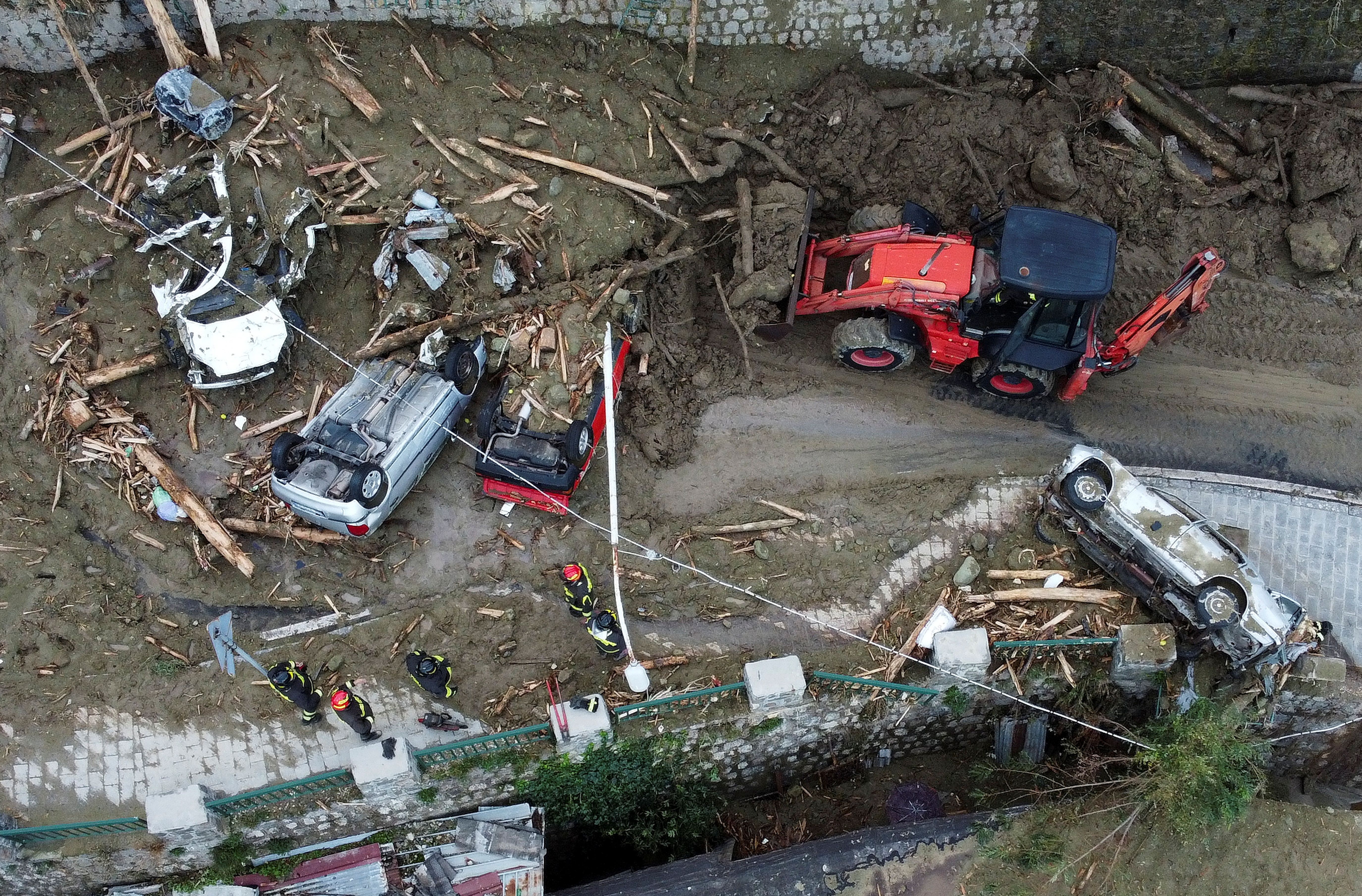 Rescuers work at the scene of a landslide on the Italian holiday island of Ischia, Italy. (REUTERS/Ciro DeLuca/)

Hong Kong is back on the world scene,...