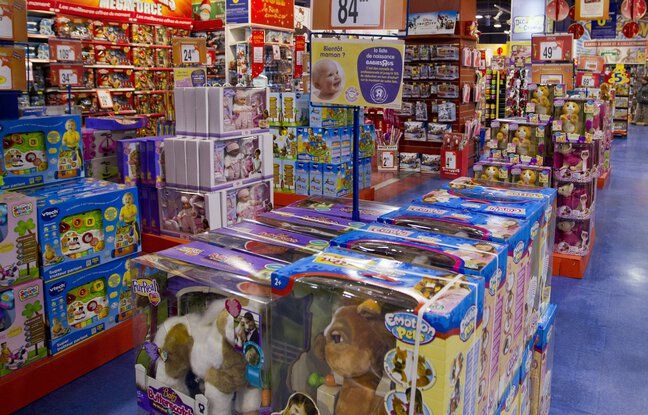 There has been a lot of talk about the closure of bookstores facing large brands and surfaces, which remained open during the new confinement. But we should not forget the toy dealers: the federation of toy dealers announced on Friday the filing of a summary before the Council of State against the sale of toys in hypermarkets, which can – unlike them – remain open during confinement.

The reconfinement decree published on Thursday “generated a distortion of competition by providing for the closure of stores specializing in the sale of games and toys, while at the same time letting hypermarkets sell equivalent products in their shelves”, accuses the Federation of Shops specializing in Toys and Children’s Products (FCJPE) in a press release, confirming information from TF1. The FCJPE has decided to file a summary before the Council of State for “manifest violation of the principle of equal competition”.

Toy stores are not on the list of so-called “essential” businesses authorized by the government to remain open during lockdown. However, they can make deliveries or offer to pick up orders at the store door (“click and collect”).

This decree will have “disastrous consequences for companies specializing in toys, which achieve more than half of their sales over the last three months of the year and represent 20,000 direct or indirect jobs in France”, the FCJPE warns.

The booksellers, who also had to close shop, had also protested against the opening of the books and culture departments of supermarkets and specialized. The Minister of the Economy and the Minister of Culture refused to open bookstores but announced on Friday that supermarkets should close their cultural shelves, “for the sake of fairness”.

Asked Friday evening about this appeal, Bruno Le Maire insisted on the possibility for these businesses to offer order withdrawals and deliveries. “In March, it was not possible because you were not allowed to go out for this reason. With the new certificate, this is now possible. I invite all French people to show patriotic behavior and to promote local commerce, ”said the Minister of the Economy.

The FCJPE is co-chaired by Philippe Gueydon, manager of King Jouet, and Romain Mulliez, manager of the PicWicToys brand, who succeeded Toys’R Us in France.

Champions League: Sadio Mane will not appear in the first match against PSG

Senegalese striker Sadio Mane, who suffered a right fibula injury on November 8, will not recover enough to play...

A burger and drink menu? Nothing original, but it's something that could soon be on our plates in...