Walmart shooting: Man who killed 6 people was manager at supermarket

A supermarket manager Walmart shot dead six people in a local in USA packed with shoppers for Thanksgiving, and then committed suicide, authorities said Wednesday, in the second mass shooting in the country in four days.

Four other people remained hospitalized in unknown condition after the shooting that occurred Tuesday night in the city of Chesapeakein the state of Virginia (east), Police Chief Mark Solesky said.

LOOK: “My boss opened the door and started shooting”: the author of the shooting at Walmart in Virginia was a supermarket employee

At a press conference, Solesky said it was believed that the gunman had died of a “self-inflicted gunshot wound” and that the reason for the attack was not yet known.

City authorities identified the attacker as André Bing31 years old and resident of Chesapeakeand they said that he was armed with a pistol and several magazines.

Police work at the scene of a mass shooting at the Walmart Supercenter in Chesapeake, Virginia, United States, November 23, 2022. (EFE/EPA/SHAWN THEW). (SHAWN THEW/)

Walmartthe largest retailer of USA, confirmed that Bing was a night shift manager, employed by the company since 2010.

briana tyleran employee of Walmart who survived the attack described scenes of terror as the attacker entered a staff break room and opened fire.

“I wasn’t targeting anyone specifically,” Tyler told ABC. “He literally started shooting all over the break room and I saw multiple people fall to the floor.”

The employee said the gunman looked directly at her and fired, but missed by just inches. He didn’t say a word, he didn’t say anything at all. Tyler pointed out.

The massacre occurred two days before Thanksgiving.the quintessential American family party that takes place this Thursday, and after a weekend shooting at an LGBTQ club in Colorado that left five dead.

It was also the second mass shooting in the state of Virginia this month: Three University of Virginia students who were playing on their soccer team were killed on November 13 by a classmate.

President Joe Biden He condemned what happened and called for stricter gun control laws. “Due to yet another horrific and senseless act of violence, there will now be even more tables across the country with empty seats this Thanksgiving,” he said in a statement. 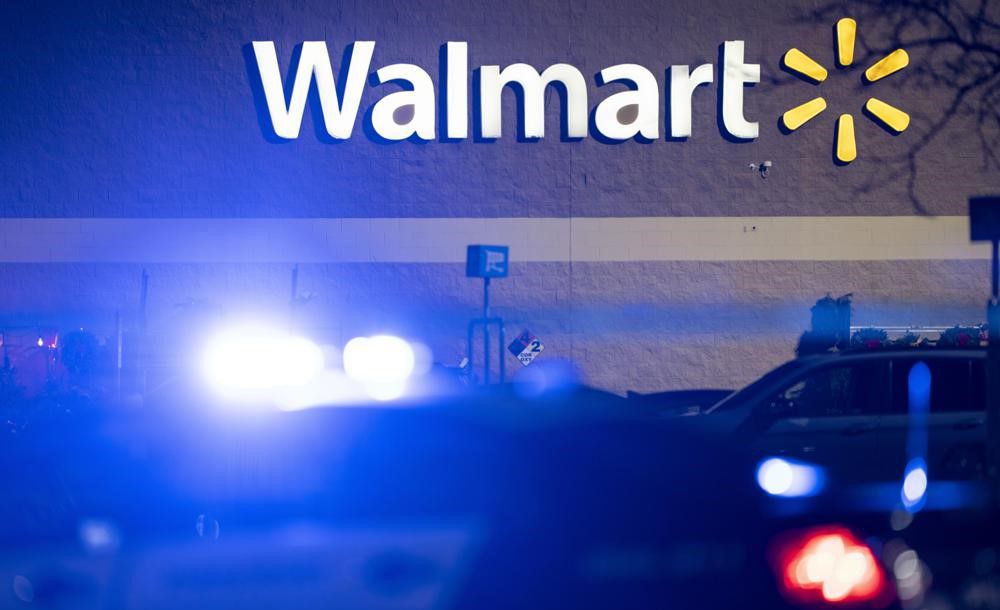 Police are at the scene of a mass shooting at a Walmart in Chesapeake, Virginia. (AP Photo/Alex Brandon)

On Tuesday, the first emergency calls were made shortly after 10:00 p.m. (0300 GMT Wednesday) while the store was still open. Chesapeake It is about 240 kilometers southeast of the US capital, Washington.

The shooter and two victims were found dead in the break room, while another body was found in front of the store. Three people later died at the hospital.

The youngest victim was 16 years old, according to the authorities.

Terri Brown, who was in Walmart but left just before the shooting, he said the store was packed with shoppers.

“It was extremely crowded”, Brown told 13NewsNow, a local ABC affiliate station. “All the checkouts were very busy (and) there were long lines at the self-service checkouts.”

In the store’s parking lot Wednesday, flowers and small white electric candles honoring the victims were placed below crime scene tape. White, blue and gold balloons tied to a tree moved in the wind. Shyleana Sausedo-Day, of Portsmouth, Va., places flowers near the scene of a mass shooting at a Walmart, Wednesday, Nov. 23, 2022. (AP Photo/Alex Brandon)

Susan Neal Matousek stopped by the memorial display to “give my condolences,” she told AFP.

“I couldn’t imagine losing someone right before Thanksgiving.” recounted this retired 57-year-old teacher.

Walmart said in a statement Wednesday that it was cooperating with the investigation.

Attacks with firearms in supermarkets in USA they have become increasingly common in recent years.

In May, a teenager killed 10 people, mostly black, at a grocery store in Buffalo, New York, in May. Last year, a shooting at a supermarket in Boulder, Colorado, also left 10 people dead. And in 2019, a young man killed 23 people and injured 26 others at a Walmart location in El Paso, Texas.

“It could have been me,” Edna Dunham, a Chesapeake resident, told CBS News.

Tyler, the Walmart employee, told ABC that the manager in question had a reputation for having a difficult character.

“There was always something going on with him” or “he had a problem with someone,” she said, but still noted: “I never would have thought I would do something like that.”

The Mexican President, Andres Manuel Lopez Obrador (AMLO)said this Friday that he was "willing" to go to Lima to...

Mateu Lahoz: Who is the referee who dared not charge Qatar a penalty in their World Cup?

Mateu Lahoz is once again the protagonist in the match between Qatar and Senegal on the second date of...

Gold prices were lower on Friday as the dollar regained some ground, but expectations of less aggressive interest rate...

La Garfield in Lima: her new album, the change of vocalist and her frustrated visit to the eventful Festival Perú Central and more

Erick Ramírez attends us by Zoom from Mexico, just a few minutes after his team debuted in the World...

The Kremlin does not want to repeat the mistakes of the wars in Chechnya, during which the authorities embarrassed...

In the midst of a complicated human situation, Kherson continues under Russian fire with multiple civilian casualties and...

The Kremlin does not want to repeat the mistakes...
World

In the midst of a complicated human situation, Kherson...
World

At least 44 people have been arrested during an...

Mateu Lahoz: Who is the referee who dared not charge Qatar a penalty in their World Cup?