“Women usually they don’t date men who are shorter than them. The hardest thing sometimes was to feel that he was not going to find a wife.

LOOK: What is known about Andre Bing, the manager at a US Walmart store who killed 6 people

The phrase is from Sam, a 30-year-old British man who is part of a trend of cosmetic surgeries for men in countries like the United States, the United Kingdom and even Spain: leg lengthening to increase height.

An invasive operation that involves break the femur to be able to gain a few centimeters.

Sam points out that thanks to an operation, he gained 8 centimeters in height and went from being 1.62 meters to 1.70 meters in a few months.

“I’ve always thought that being tall and being successful are related. That’s why I had to find my own solution,” he told BBC journalist Tom Brada.

This operation involves weeks of convalescence and a recovery process during which the patient cannot walk even for months.

But not only that, in some cases men pay close to US$70,000 to gain a few inches in height.

“It is a painful operation, which implies a long recovery process because a part of the bone is soft, so you must wait to walk until that bone can support the weight of the body again,” he told BBC Mundo. surgeon Kevin Debiparshad, who performs this operation.

Debiparshad has come to do up to 50 surgeries of this type per month at his Las Vegas practice, called the LimbplastX Institute, where he says he has noticed an increase in demand among male patients.

The operation consists of breaking the bone and separating it a little with the help of a bar. /GETTY IMAGES

“Increasingly, the taboo against men not having cosmetic surgery has been left behind. And in that sense, this operation has become one that they especially seek,” says Debiparshad.

But it has not always been so. For years, especially in oriental countries, the leg lengthening operation has been required to a greater extent by women.

For example, local and international media reports indicate that many women in chinato a greater extent than their male counterparts, have undergone a similar operation to achieve greater height.

However, in Western countries the figures indicate that it is an expanding phenomenon based on the demand of male patients.

The practice is surrounded by controversy.

Both the American Association of Plastic Surgeons and the American Academy of Orthopedists pointed out in documents sent to BBC Mundo that leg lengthening surgery is an orthopedic procedure for cosmetic purposes.

And the pioneer of this technique was precisely a Soviet orthopedic surgeon who pioneered rehabilitation treatments for soldiers who were maimed during World War II.

His name was Gavril Ilizarov, a respected doctor who during his time on the battlefield noticed, along with experiments he had done during his student years, that bones, especially the femur, tended to expand and “fill” the gap. that remained between two parts when a fracture had been suffered. 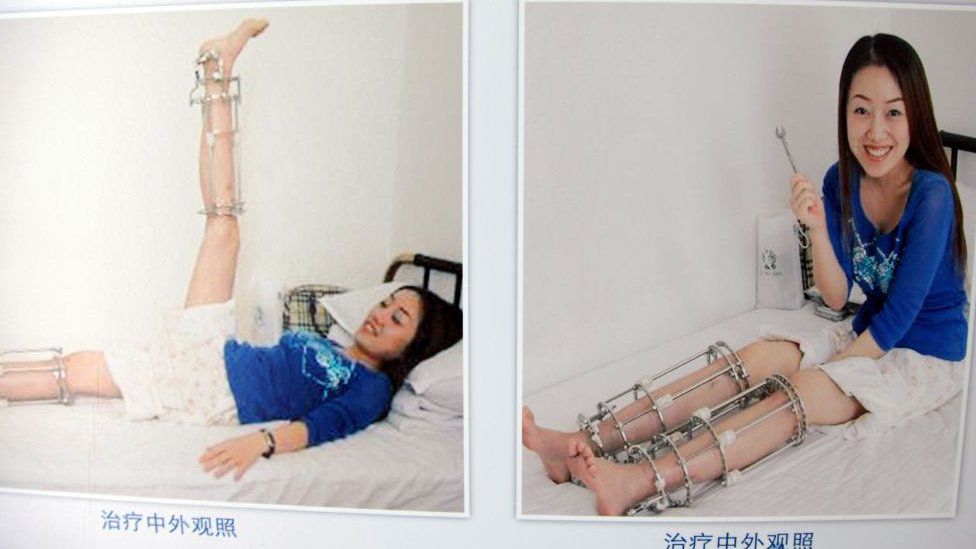 In China this operation has been very popular among women. /GETTY IMAGES

Then Ilizarov developed a technique that consisted of breaking the bone, but without compromising the part known as the periosteum (which is the external part of the bone), separating it a little and waiting for the bone itself to take care of occupying the space that was left in between. .

“This technique has evolved a lot, but really the initial idea is the same: what we do is that the bone itself fills that space and that is where the extra centimeters that the patient wants are gained,” explains Debiparshad.

As explained by several surgeons consulted to BBC Mundo, the standard treatment is as follows: first, a hole is drilled and made in the leg bones, which are then split in two.

After this, a metal rod is surgically placed into the bone. and is held in place by a series of screws.

The rod is then slowly lengthened by up to 1 millimeter each day, stretching until the patient reaches the desired height and their bones are left to heal again.

For both Sam and other patients, the procedure is not only painful, but the recovery time can be very long.

Sam notes that He did physiotherapy a couple of hours a day, three or four times a week, for a period of six months.

“It was a very humiliating experience. It’s a bit crazy…it’s like getting new legs and learning to walk again. It looks like cosmetic surgery, but I did it much more for my mental health,” she notes. 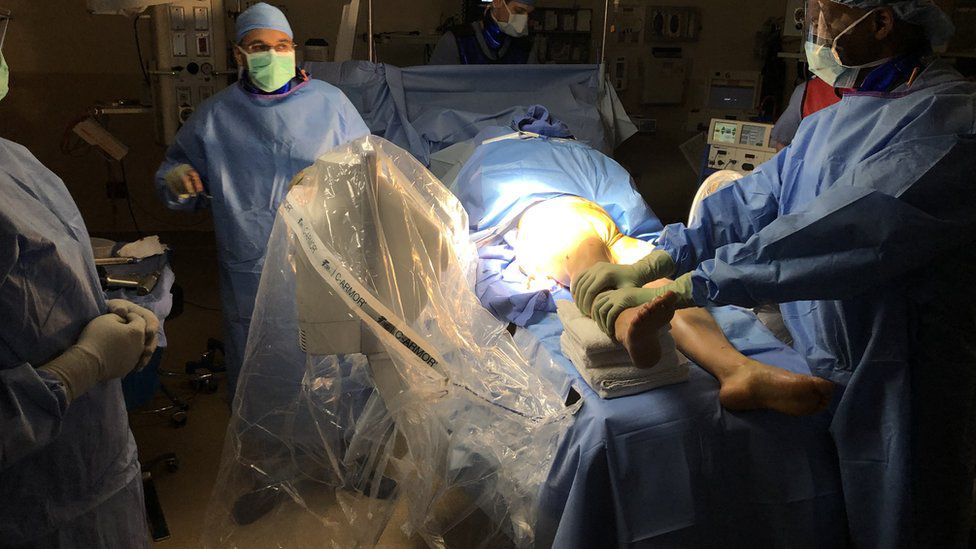 Leg lengthening is a complex operation that involves many months of recovery. / LIMBPLASTX INSTITUTE

This is one of the aspects that most attracts attention among the medical community when looking at this intervention: the risks involved in undergoing such an invasive procedure for cosmetic purposes.

Some specialists warn of potential complications, from nerve injuries and arterial embolisms up to the possibility that the bones will not fuse again.

“Techniques and technology have improved substantially over the past two decades, making it a safer procedure; however, in addition to growing more bone, more muscle, nerve, blood vessels, and skin must be grown, and the procedure remains extremely complex,” Hamish Simpson, an orthopedic surgeon, told the BBC.

But it is not only a physical matter: specialists warn of psychological risks that must be taken into account, such as that some of these patients may have body dysmorphia.

And that leads them, according to specialists, to prioritize the operation over physical and mental well-being. 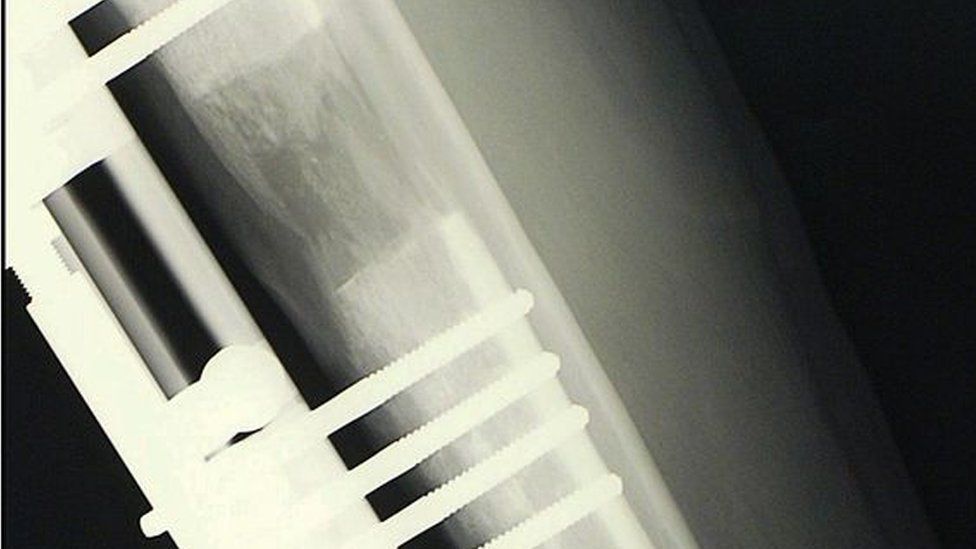 The bone, once separated, begins to fill in the space. /GETTY IMAGES

“When faced with the dilemma of choosing somewhere with surgical expertise in these types of operations or somewhere to do it cheaply, I don’t think people are necessarily aware of all the things that can and often do go wrong. “David Goodier, a British orthopedic surgeon, tells the BBC.

“And since these operations are often carried out outside the countrythose who end up attending to these failures are the local doctors, who have not performed the operation,” says Goodier.

Debiparshad agrees that it is not a simple intervention and that it has several aspects that make it risky.

“High-tech equipment is needed to reduce postoperative risks, but above all we are very clear with patients about the risks of the operation and that the recovery process is going to be very slow,” says the surgeon.

“In addition, we offer postoperative support to people who undergo this surgery to guarantee the success of the procedure,” he adds.

But what is undeniable is that the Leg lengthening is an operation that men are looking for more and more to gain a few centimeters.

In at least a dozen countries there are clinics where this type of procedure is performed and those consulted by BBC Mundo in the United States, Canada, Spain and the United Kingdom confirmed that there was an increase in men requesting to undergo it.

In fact, Debipashard was more precise and pointed out that consultations of this type they have doubled in the last three years. 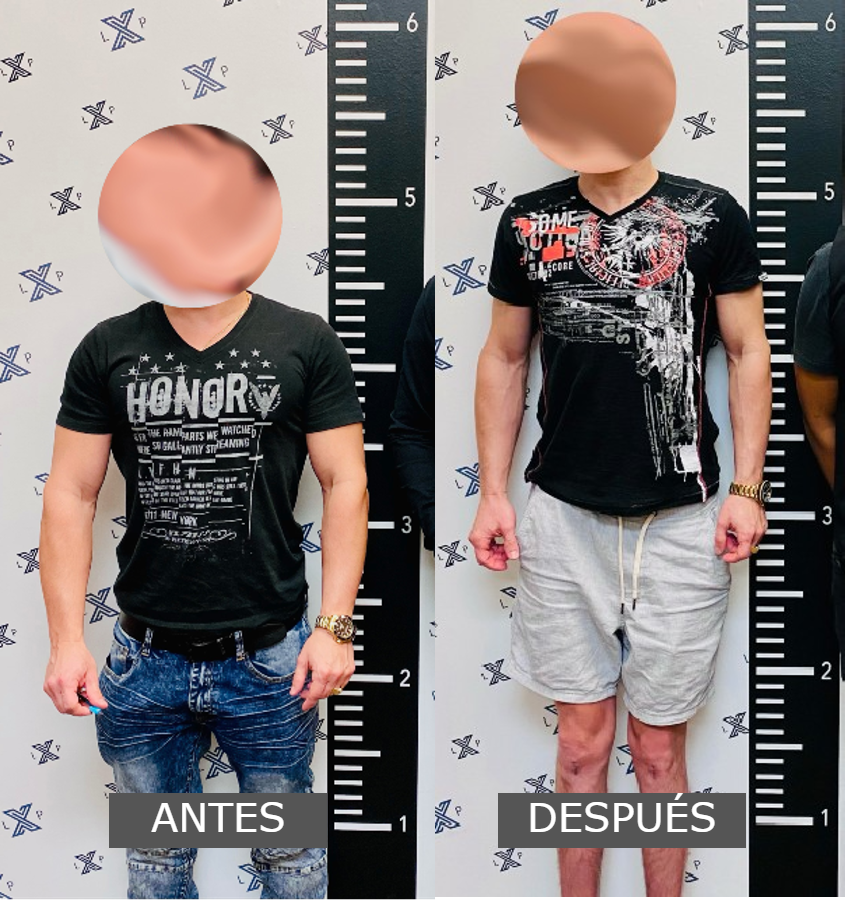 In operations you can earn up to eight centimeters. / LIMBPLASTX INSTITUTE

“What I hear from my male patients is that they have lost their fear of having surgery of this type and they think this can help them improve their self-confidence“, he notes.

Among the reasons that you have heard about the reasons that men seek to have the operation are personal matters to statistics such as that the average height of the 500 richest people on the planet (published by Forbes magazine) was 1.82 meters .

This trend coincides with the figure that the American Association of Plastic Surgeons gave to BBC Mundo in which it indicates that plastic surgeries in men have increased by 30% compared to the previous decade.

But all the specialists consulted for this note point to the same aspect: it is a complex, expensive, high-risk operation that has a long recovery process, which must be supervised by specialists.

Share
Facebook
Twitter
Pinterest
WhatsApp
Previous article
Google does not give up on video games: the company already presents a new ally, after the failure of Stadia
Next article
Low confirmed! Ecuador loses Jhegson Méndez for the match against Senegal | PHOTO