“It’s like resuscitating those who don’t know they’re dying”: the people who prevent overdose deaths in the US

The first time he overdosed he was 19 years old and surrounded by his family. Nobody knew what to do.

Look: What is the origin of the Thanksgiving celebration in the US (and why is it more important than Christmas)

“It is as if suddenly someone flipped the switch and you were left in the dark. Although I’m reflecting now, because at that time I didn’t realize anything,” recalls this native of Tennessee who lives in California today and just turned 30.

He was lucky: the emergency services arrived on time. The light came back on. He was still alive.

There was also a second occasion. She used fentanyl, another opioid with an analgesic and anesthetic effect, and heroin. This time he was saved by someone who knew how to immediately identify what was happening to him and had naloxonea medication that rapidly reverses opioid overdoses.

That, and the fact that several of his friends died, made him rethink everything.

Today he is a member of the battalion of volunteers spread throughout the United States who daily take to the streets to educate about opioids, to teach how to identify when someone is suffering an overdose and to distribute —and administer if necessary— the antidote among the population in risk.

More of 100,000 people die each year in the United States from overdoses, 80,000 of them from opioid useaccording to the most recent data from the National Center for Health Statistics (NCHS), a number that has increased by 850% in two decades.

Opioids are compounds that are often prescribed to treat pain. Though very addictiveare commonly used, and their use for non-therapeutic purposes is also widespread, due to the feeling of euphoria they cause.

As authorities debate and strategize to curb growing addiction, they are also embracing measures to—as they are called in medical jargon—”harm mitigation.” 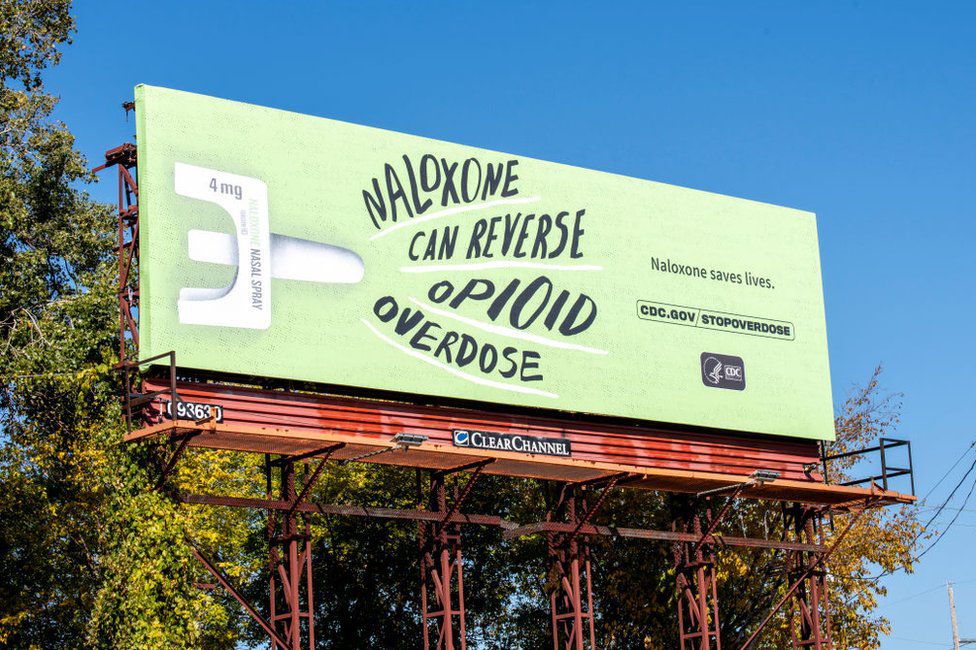 “A medicine with the power to save lives.” This is how the CDC defines naloxone. (GETTY IMAGES)

The latter are based on the distribution and administration of the aforementioned naloxone, a generic drug that the National Institute of Drug Abuse defines as a “opioid antagonist”. And it is that it blocks the chemicals of the family of these substances (heroin, oxycodone, morphine and fentanyl, among others) and prevents them from adhering to the receptors of the nervous system.

It is, therefore, an antidote that, if administered on time, completely reverses the effects of an opioid overdose, while “it has practically no effect” in people who have not taken these substances, the WHO stresses.

In most countries, its access is restricted to health professionals and its availability continues to be limited, although in some, such as Australia, Canada, Italy or the United Kingdom, it is available free of charge.

Also in the US, where you can buy in pharmacies, the injectable version for US$3 and the nose spraya two-dose kit marketed under the name Narcanfor $47.50.

The Centers for Disease Control and Prevention (CDC) describes it as “a drug with the power to save lives” that “can be used by anyone without medical training or authorization.”

Therefore, also is distributed free between law enforcement, first responders, community associations and organizations that work with homeless people and other populations at risk, through state programs. 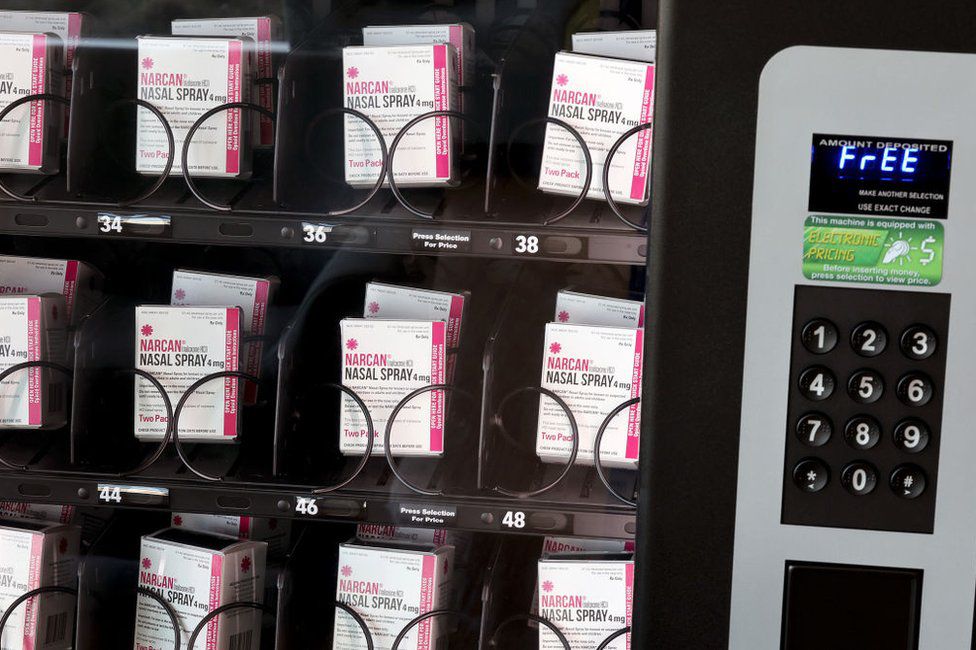 In Los Angeles County jails there are vending machines with free doses of Narcan. (GETTY IMAGES)

In California it is available in schools and will soon be available in public libraries. And there are vending machines with the drug in Los Angeles County jails for those who have already served their sentences.

It is that they are another of the risk groups: between January 2019 and June 2020 half of those who died after leaving prison died of opioid overdose, according to the state Department of Health Care Services.

By mid-October, the Naloxone Distribution Project run by the California Department of Health Care Services (DHCS) had already delivered 1.5 million units, with which authorities claim to have reversed over 100,000 overdoses. An initiative that has a budget of US$52 million, between state and federal funds.

“Insert it into your nose and press”

One of the organizations receiving naloxone for direct distribution is A New PATH (for Parents for Addiction Treatment and Healing).

And with them works Smiddy, who for his work is also known as narcan nate. 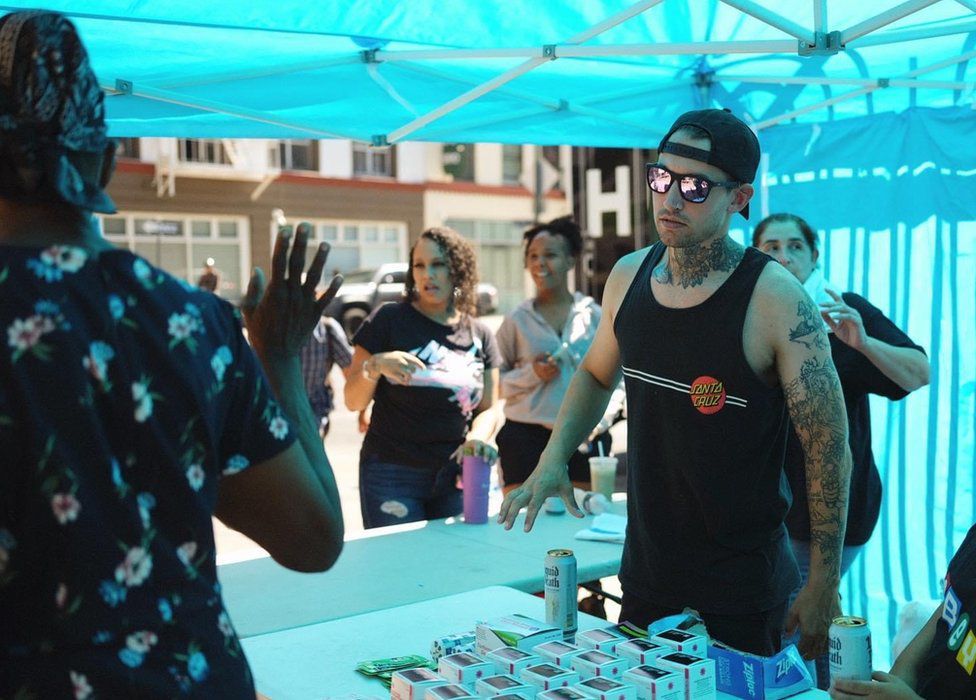 He goes out to do “field work” four or five days a week, often with Humanity Showers, an organization that provides showers for homeless people in the San Diego area. “Distribution two or three kits per personsometimes four,” he explains, lamenting that they often run out before they can restock.

But it is not limited to delivering the boxes.

First teach how to identify an overdose. They are symptoms that have not been erased from his memory since that time he witnessed the first one.

“His head was completely drooping. The guy wasn’t even nodding. He had gotten her skin was bluish, her pupils were contracted, very small, and it was difficult for her to breathe. It was sporadic breathing, she was choking. She had her death rattle,” she recalls.

They are, one by one, the signs of opioid poisoning, according to the CDC page. And the steps to follow for those who witness them are: Shaun Willis of the Brooklyn Community Recovery Center in New York shows how to use Narcan to reverse an overdose in a person who has used opioids.

“Put it up your nose and press”, Smiddy tells those he instructs on the use of the Narcan. “Repeat it after three minutes. By then you will have called 911. Use it until you come to,” he says, following the instructions of the health authorities.

“I offer individual training, with parents with children who use opioids on a regular basis… With everyone who comes to us,” he explains.

— Do you keep track of how many people have been saved from an overdose death?

— We resuscitate people every week. Because it is like resuscitating someone who doesn’t know they’re dying. 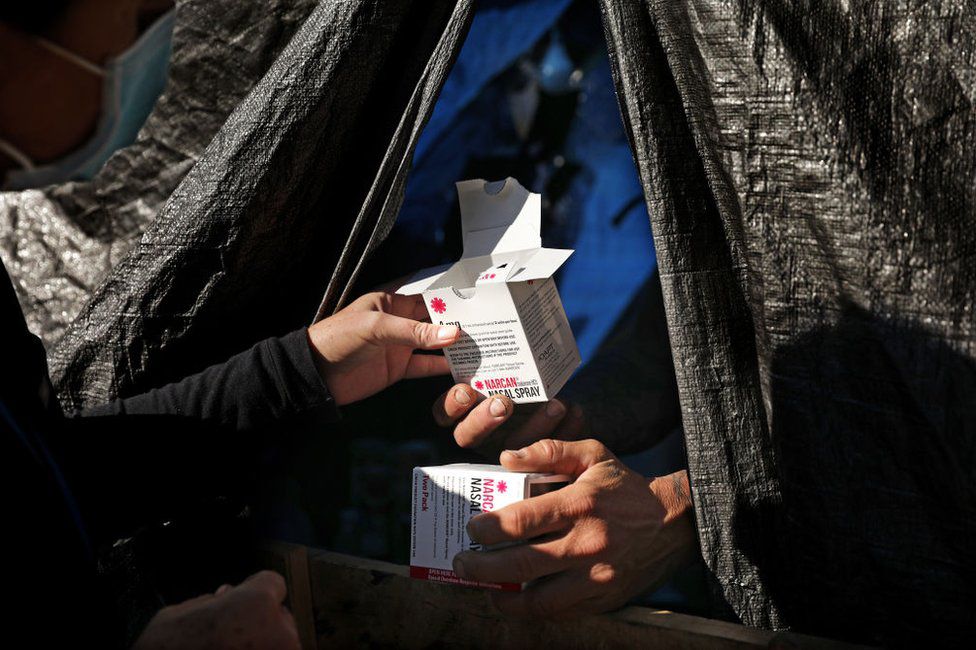 Homeless and addicted people make up one of the populations at risk. (GETTY IMAGES)

Visits like those of narcan nate They are frequent in the encampment that homeless people have formed on Aetna Street, in the Van Nuys neighborhood of Los Angeles.

A team from the Department of Health Care Services reviews the situation store by store, offers sandwiches and coffee, and explains how to use Narcan.

“We began to normalize it. Like first aid kits, food, clothing… we treat it as part of care we offer,” says Shoshanna Scholar, director of damage mitigation and community outreach for the Los Angeles County Department of Health Services.

“Every other day I see an ambulance come and take someone away,” says Robert, who lives in a tent near the North Hollywood subway station. “Happens too often. It’s heartbreaking,” he says, acknowledging the work of health workers and volunteers. 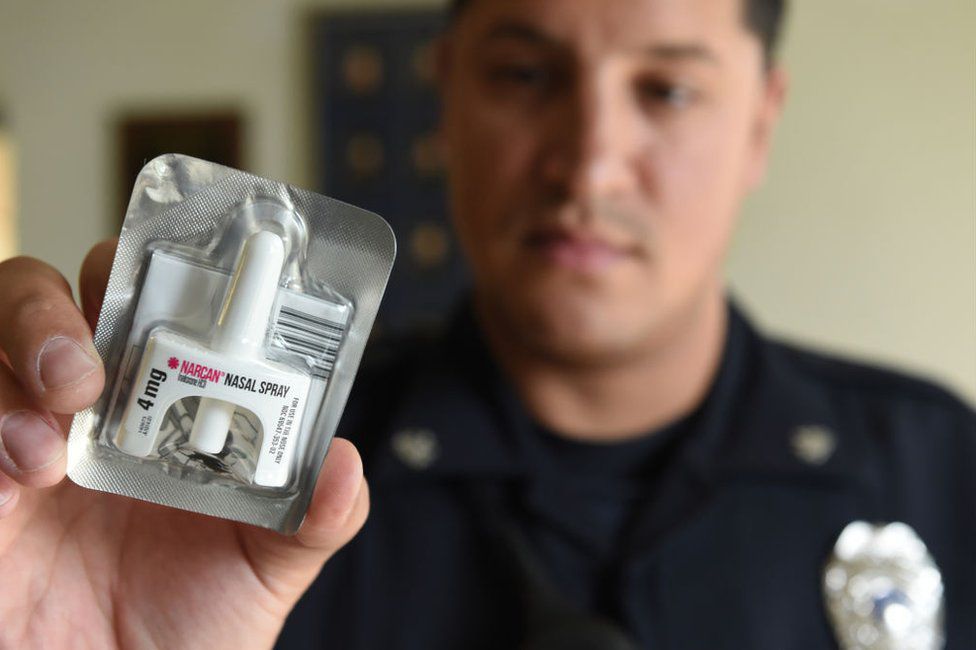 In addition to administering Narcan, 911 should be called. (GETTY IMAGES)

Although not everyone approves of the naloxone distribution strategy. Y Critics say this could make opioid addicts more likely to take risks.

This is also argued by those who oppose the so-called centers for the prevention of overdose or supervised injection, such as the one in New York, the first authorized by a local government in the US.

Asked what he would say to those who defend that position, Smiddy, who after consuming opioids and all kinds of substances “intensely and chaotically” for eight years has been “clean” for three years, is clear:

“I would tell them that all naloxone does is allow people to live. You can’t change your life if you’re dead. It’s a matter of having compassion and empathy.”

Share
Facebook
Twitter
Pinterest
WhatsApp
Previous article
Gustavo Alfaro considered that Ecuador did not beat the Netherlands “due to the eventualities of soccer”
Next article
Brazil: alleged perpetrator of shootings at two schools arrested