A year later, the investigation is stalling, hampered by political interventions 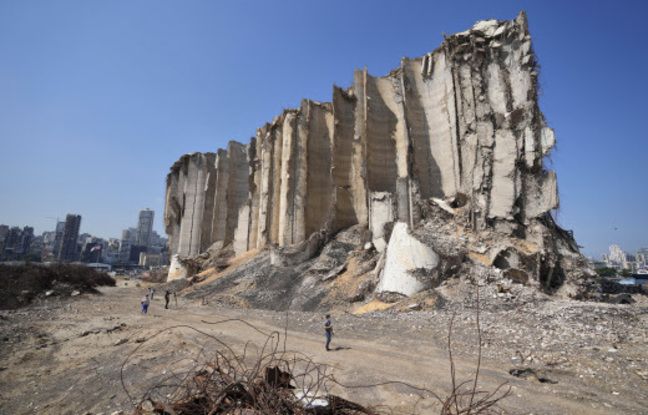 A year later, gray areas still remain. Despite the scale of the deadly explosion at the port of Beirut which traumatized Lebanon, no official has been brought to justice and the investigation is stalled, obstructed by political interventions.

On August 4, 2020, firefighters are dispatched to the port to extinguish a fire. Shortly after 6:00 p.m., the explosion left 214 dead and more than 6,500 injured, devastating entire districts of the capital. The same evening, the authorities blame the tragedy on 2,750 tons of ammonium nitrate, abandoned for more than six years in the port “without precautionary measures”.

Today, public opinion is still awaiting the conclusions of the Lebanese investigation, denouncing political interference that could sabotage the affair, and the same questions remain unanswered. What caused this explosion? Why has ammonium nitrate been forgotten at the port, despite the dangers? Who, among political decision-makers and security officials, knew about it?

Some fear justice will never be served in this case. As the examining magistrate Tarek Bitar seeks to indict several former ministers and senior officials, the immunity they enjoy because of their responsibilities is put forward to hamper legal proceedings.

“They are simply trying to escape justice,” asserts lawyer Youssef Lahoud, who represents more than 1,000 victims of the explosion. Despite these obstacles, the investigation is “three quarters completed,” told AFP a judicial source close to the case. And Mr. Bitar hopes to announce the findings of the investigation “by the end of the year.”

The cargo ship loaded with nitrate

In November 2013, the vessel “Rhosus”, flying a Moldovan flag, which left Georgia and was bound for Mozambique, called in Beirut with ammonium nitrate on board. At the time, due to a dark court case against its owner, the ship was immobilized. The cargo had been unloaded in 2014 and placed in hangar number 12, a dilapidated warehouse. Abandoned, the “Rhosus” ended up sinking in 2018.

A private Mozambican company, Fabrica de Explosivos de Mocambique (FEM), told AFP in 2020 that it had ordered ammonium nitrate from Georgia in 2013, but that this cargo had never been delivered to it. .

According to Mr. Lahoud, the investigation revealed the identity of several parties involved, including the name of the owner of the shipping company responsible for transporting the cargo and the name of the Mozambican bank that financed the operation. “Justice has determined the responsibilities regarding the party that brought the ammonium nitrate to Beirut, and the reasons why the cargo was unloaded, how it was stored, why it was not destroyed or returned” to abroad, he adds.

“But the investigation has not yet determined whether other parties” would be behind the Rhosus expedition, Lahoud added, referring to foreign countries or groups. The local investigation also looked at press reports establishing alleged links between three businessmen of Syrian and Russian nationality with Savaro Limited. It was this company, specializing in the trade of chemicals, which had received the order from the Mozambican company. It has an address in London, but its real owners remain unknown.

“Weak point” of the investigation, according to Mr. Lahoud: the fact that it has still not determined the cause of the explosion. Was it the fire? “If so, how did it start? “Asks the lawyer, for whom nothing yet allows to rule out the thesis of” sabotage “or” attack “. Immediately after the tragedy, security sources had mentioned welding work which could be at the origin of the fire. But some observers remain cautious.

Judge Bitar wishes to conduct a reconstruction at the site of the explosion, to determine the causes of the fire. He also requested the cooperation of several countries regarding the origin of the cargo, including asking France, the United States and Italy to obtain satellite images of the port, in the hope of seeing what was happening in the port on August 4, 2020.

France assured that it had no satellites over Lebanon on the day of the explosion, according to the judicial source. The absence of such images also makes it difficult to know whether certain quantities of ammonium nitrate have been quietly stolen from the warehouse in recent years, adds Lahoud.

Because according to experts, given the magnitude of the explosion, the quantity of ammonium nitrate at the port should be limited to a few hundred tonnes – and not 2,750 tonnes as initially announced.

If the authorities have always categorically refused any international investigation, France has launched its own procedure since French people are among the victims. In mid-June, some fifty NGOs called for a UN investigation, citing “flagrant political interference, the immunity of senior political leaders” but also “violations of due process”.

The previous investigating judge had he not been recused in February, after having provoked an outcry within the political class by indicting the resigning Prime Minister Hassan Diab and three former ministers? But for a large part of public opinion, the whole Republic must be held accountable. On July 20, 2020, just a few days before the tragedy, President Michel Aoun and Mr. Diab had thus received a warning from the State Security.

In an internal report consulted by AFP, prepared several months before the explosion, the State Security reported that the warehouse contained “dangerous materials” warning of a “huge fire” which could “almost entirely destroy the port ”.

To date, Hassan Diab is indicted and 18 people are in detention in connection with the case, including the director of customs Badri Daher, and the director of the port Hassan Koraytem. According to the judicial source, the prosecutions nevertheless concern those responsible “for whom it has been proven, through documents and witnesses, that they were aware of the presence of ammonium nitrate and its dangers”.

Share
Facebook
Twitter
Pinterest
WhatsApp
Previous articlePfizer and Moderna have raised the price of their vaccine for the EU, reveals the Financial Times
Next articleThe keys to optimizing the taxation of your life insurance

The PS will nominate its candidate on October 14, but without debate