He fooled everyone: the false doctor who went from being a hero to being accused of murder

With his head bowed and a jacket over his head, Ignacio Nicolás Martín left his house escorted by two police officers. Argentines toward one of the patrol cars. With several cameras around him and people filming what was happening, the alleged doctor was arrested on February 4, 2021, facing charges such as manslaughter by eventual intent and usurpation of title.

However, this would only be the tip of the iceberg. What seems like a simple identity forgery brings with it a story full of deception that affected more than fifty families during the pandemic, as the 19-year-old Argentine who posed as a doctor, He wrongly prescribed to patients who did not have covid, charged public fees, falsified the license plate that appeared on his seal and even treated a patient with congenital heart diseasewho, minutes later, died due to alleged malpractice.

That’s how it is. This is the case of the ‘trucho doctor’ (named after this by several Argentine media, referring to the fraud he committed), a young man who entered the Emergency Operations Center (COE) in the city of Río Cuarto, Córdoba in 2020, which is the entity in charge of designing and implementing strategies against covid 19. It was there when the odyssey of many families began and perhaps one of the most famous cases in Argentina.

Your volunteering as a paramedic

Martín was hired at the beginning of 2020 within the framework of the call for health professionals to integrate the work teams against the coronavirus. In the midst of the pandemic, more than one nation required all possible hands to be able to face this new virus. At first it was supposed that I would only be a volunteer in the technical operations that they had to carry out; however, due to the increasing occurrence of cases, He ended up attending the team of doctors who cared for covid-19 patients.

The virus left a balance of 136 thousand deaths in Argentina. (iStock/)

From that moment on, a strong reputation was created, which positioned him as one of the most important workers in Río Cuarto. So much so, who was frequented by the local press when giving health information and on the management of the disease.

At that time everything was going very well for him. He had even found love in a girl who ironically is a paramedic and works at the COE. However, his lack of expertise began to raise suspicion little by little.

The complaint that changed everything

On December 21, 2020, several co-workers warned that something was wrong. The first suspicions were raised only by his appearance, since he looked too young to run an operations center of such magnitude, where he not only had to answer calls to make teleconsultations, but also ordered how to act in the health center.

Ignacio Nicolás Martin, 19, frequently posted photos and stories on his Instagram account in which he exhibited his alleged status as a doctor. If you see him, he writes down where he saw him and calls the police. He looks for it intensely. pic.twitter.com/2ifFTqY5wM

It was then that one of the workers decided to look up his license plate number in the database. According to his stamp, the number that identified him as a doctor was 42678/9; Even so, when looking for it in the government database, they were able to verify that it really corresponded to Dr. Alyssa Yasmine Goncalves. Secondly, there was also an irregularity in his identity document, since when looking for it it appeared that it belonged to a man named Brian.

At that moment was criminally denounced by the COE, the Ministry of Health and the Council of Physicians of the Province, who presented to the authorities copies of his identity document -in which he presumed to be 24 years old-, a false professional card, attendance sheets, and documentation of what the functions were within the organization.

The life of Nicolás Bertol and Mrs. Fernández

The first complaint that came after the capture of the alleged health worker was filed by Patricia Varela, the mother of the young Nicolás Bertol.According to what she told the Argentine media ‘Clarín’, it all began on November 12, 2020 when she and her son had arrived from the Río Cuarto regional hospital, after Bertol, 29, was hospitalized for problems related to congenital heart disease.

In the last hours another chapter of the story was added, the hotel where he was staying denounced that Ignacio Nicolás Martín left without paying

A young man who was from Río Cuarto and suffered from heart problems died when Ignacio attended him pic.twitter.com/OqXx1E03L9

That day Nicolás felt bad again, which is why Varela decided to contact the cardiologist and Undersecretary of Health, Isaac Pérez Villarreal, as soon as possible. The doctor’s response was not as quick as expected. In fact, it took him a day to tell the woman that a home doctor would soon be in her home.

This is where Ignacio Martín, the official in charge of caring for Nicolás, enters. When he arrived, the young man was scattered, with dilated pupils and low saturation. Not knowing what to do, Ignacio asked the relatives if any of them knew how to perform cardiopulmonary resuscitation maneuvers, but unfortunately, no one in the room was a doctor.

After this he called an ambulance hoping to receive help as soon as possible. However, by the time the paramedics arrived it was already too late. “At that moment you don’t realize it,” Varela told ‘Clarín’.

When he found out about the case, the victim’s mother took legal action against the already captured ‘rogue doctor’, arguing that if he had received adequate care, his son would probably be alive. For this very reason, he was charged with intentional homicide and it is one of the many charges for which he will be tried in the near future.

To this case is added that of serious injuries due to eventual intent, accusation made by María Fernández, who told the Argentine channel ‘El Doce’ that her 84-year-old mother had a breakdown at her husband’s wake, and when a relative called the medical service, the young man arrived accompanied by a nurse. Fernández recounted that everything became strange when her mother’s veins began to burst. 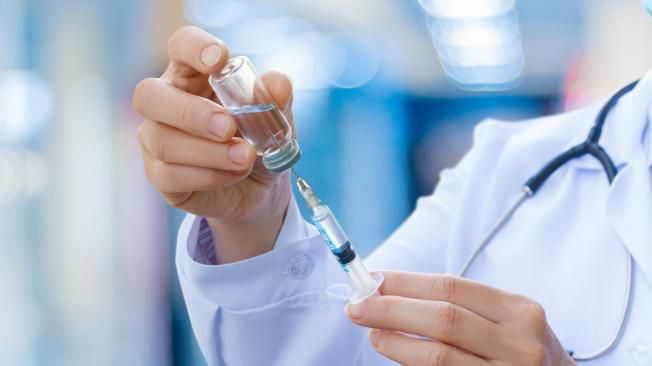 Ignacio medicated and injected the patients he visited according to his criteria. (iStock/)

When the false doctor realized the situation, he took the elderly woman to a private clinic, accompanied her in the ambulance, and upon arriving at the health center, told them that there was not much else he could do. A short time later, the woman died due to malpractice.

The past of ‘Nacho’ Martín

Within this material there are also some documents that revealed other frauds that Martín had committed.

Martín registered on the official page of the Federal Administration of Public Revenues as a monotributista in December 2014when he was only 13 years old. At that time, perhaps he already dreamed of being a doctor, since he assured that his main activity corresponded to the category of integrated medical consultation, diagnosis and treatment service.

Ignacio Nicolás Martín pretended to be 24 years old and to be a professional doctor.
as it did? How did she manage to have a fake ID? pic.twitter.com/8scuKPGXD5

Subsequently, In 2019, Martín had posed as an inspector of the Municipality of Córdoba in order to enter shows and artistic presentations at no cost. One year later, on May 12, 2020, he registered his name ‘www.atencionmedicaSRL.com.ar’, a Limited Liability Company with which he invoiced approximately 80 thousand Argentine pesos.

This was stated in a press conference by the Municipal Prosecutor, Ricardo Muñoz, who assured that this amount corresponded to the guards provided between November and December in health centers in the city during that same year.

The capture of the ‘rogue doctor’

The day of operations to capture and collect evidence against Ignacio began on February 4, 2021 in the morning. Two patrols arrived at his home located in the Zumarán neighborhood in the province of Córdoba.

During the search, they managed to collect a blue doctor’s bag, medicines, disinfection supplies, a first aid kit, a blue uniform, a Ministry of Health jacket, and two cell phones.

According to what Prosecutor Daniel Miralles declared to the Argentine media ‘Radio Universidad’, the evidence against the defendant was compelling at that time, which is why charges could already be brought against him. This as a result of criticism regarding the delay in the capture, because although it is true that the complaint was made in December, the authorities took more than two months to arrest him.

On the other hand, it was also revealed that by November 2020, Martin had performed 26 guards and during december he had treated 53 people, prescribing, hospitalizing and medicating them in this period of time.

In resolution 190 of December 30, 2021, the magistrate in charge of the Río Cuarto Control Court, Luciana Alba, ordered that the trial for the crimes of repeated aggravated false public document and use of false private document would end without a sentence involved.

Until now, the trial continues under the orders of control judge Diego Ortiz, who is expected to give a strong verdict.

Share
Facebook
Twitter
Pinterest
WhatsApp
Previous article
These are the reasons why you should not charge your cell phone in the car
Next article
World Cup: why the victory of Costa Rica is mainly beneficial to Germany